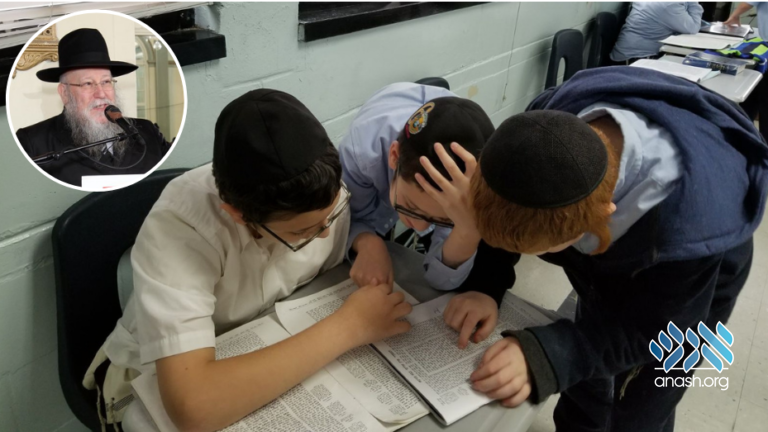 “‘Do not touch my anointed ones’ – that means children studying at Torah schools” (Shabbos 119b).

It’s ironic that the time-tested educational system of the Jewish people – the world’s first nation to enact universal public education – is now being threatened. Over 2,000 years ago, Reb Yehoshua ben Gamla, a high priest in the Second Temple, enacted that every Jewish community appoint Torah teachers for children, starting at the age of 6-7. Parents unable to afford tuition were entitled to compel wealthier community members to fund it (Baba Basra 21a).

Torah education of children is central to our faith. In Shema – the center of our prayers – we affirm Hashem’s unity, note the command to love G-d, and then immediately speak of studying Torah and teaching it to our children. Shema’s second paragraph, too, speaks of Torah education: “And you shall teach them to your children.” Indeed the Talmud emphasizes (Shabbos 119a), “The world exists only by virtue of the breath of children studying at Torah schools”!

The centrality of Torah education is reflected in our classic halachic codes,, too. Maimonides’ Mishneh Torah opens with fundamental Torah beliefs, proceeds to moral duties, and then immediately heads to the “Laws of Torah Study.” The first chapter of these laws includes the obligation to teach children Torah and the next chapter details rules for Torah schools and teachers.

For many centuries – until very recently, in fact – most nations were bemired in ignorance and illiteracy while the Jews, despite frequent persecutions, were almost universally literate and conversant with many moral and spiritual concepts.

In the modern era, many nations introduced compulsory education and in the process tried compelling Jews to change their curricula. Our great Torah leaders, however, battled against such changes. In 1843, the Russian government, instigated by Jews influenced by the German Haskalah (so-called “Enlightenment”) movement, called a meeting of select Jewish leaders to get their consent to changes in Jewish education. The Lubavitcher Rebbe, Rabbi Menachem Mendel Schneersohn, known as the Tzemach Tzedek, attended as the leader of the chassidim. Rav Yitzchak (Reb Itzele) of Volozhin represented non-chassidim.

During the months-long meeting, the Tzemach Tzedek, who insisted that the government had no right to interfere in Jews’ internal religious affairs, was placed under house arrest 22 times! The czarist minister presiding over the meeting declared that the Rebbe’s refusal to bend constituted rebellion against the czar. The Rebbe retorted, “Rebelling against the king is punishable by physical death, but rebelling against the Kingdom of Heaven is punishable by spiritual death. Which is worse?”

Eventually he wrote a treatise explaining in detail why the proposed changes were impractical and unnecessary. As a result, the conference had limited practical effect.

Two generations later, the Tzemach Tzedek’s grandson, the Rebbe Rashab, in the early years of the 20th century, was faced with similar attempts to enforce changes in Jewish education. He, too, fought valiantly against them and was largely successful.

After the 1917 revolution, the Bolshevik regime in the USSR banned virtually all religious education. In reaction, Rav Yosef Yitzchok, the sixth Lubavitcher Rebbe, risked his life and that of his followers (many were arrested, tortured, exiled, or killed) to organize a nationwide network of underground Torah schools. This network succeeded in ensuring at least limited survival of Torah Judaism in the Soviet Union until the fall of communism in 1991.

Later, when the Rebbe escaped to New York in 1940, he established a network of Jewish schools and resisted government efforts to begin the school day with secular studies. Despite his physical ailments, the Rebbe battled against the government and triumphed. The day began with Torah studies.

So the struggle we are now facing in New York is not new. Just as we resisted the most powerful totalitarian regimes in Europe, so must we fight any efforts to interfere with Torah education in America. We must ensure the continuation of unalloyed traditional Torah education.

As a final note: Compare the results of our traditional education with that of public schools. Orthodox Jewish communities have the lowest rates of crime, violence, and drug use in the city; our communal organizations – Hatzolah, Misaskim, Bikur Cholim, free-loan societies, and many others – are exemplary; and our children grow up with unparalleled moral values and concern for others. The public school systems should rise to the educational level of our yeshivos, learning the many positive lessons our time-tested system has to offer.