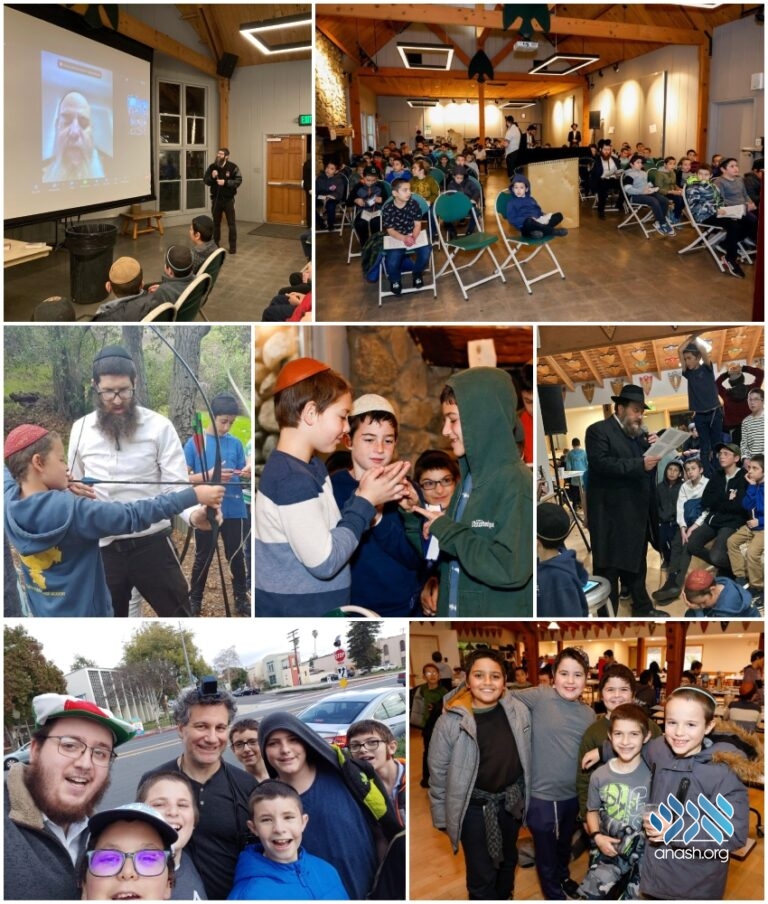 After eight days of friendship, chayus, chassidishkeit and a healthy dose of fun 120 grateful campers took leave of each other and headed home as the Tzeirei Hashluchim West Coast winter camp came to a close.

One hundred twenty grateful campers took leave of each other and headed home as the Tzeirei Hashluchim West Coast winter camp came to a close. It was an eight-day whirlwind of friendship, chayus, chassidishkeit and a healthy dose of fun. Most of the campers spend most of their year in remote places without chassidishe friends and role models, and this unique camp afforded each of them a chance to connect with such figures and create lasting-albeit long distance-relationships

Nestled in the Verdugo Mountains of Glendale, California, the 113-acre campgrounds afforded a fantastic experience with beautiful mountain views, hiking trails, archery, sports fields, outdoor amphitheaters and much more. In addition to all the on-site activities, the children were treated to a grand trip to Six Flags Magic Mountain and Scooter Jungle. A shliach is always a shliach, and there was no better display of that than the eagerness of the campers as they took off time they could have spent on another roller coaster in order to lay Tefillin on another Jew.

As Hei Teves fell out in the middle of camp, the atmosphere was accordingly celebratory. The day was marked by a special on-site Tanya printing, during which the children alternated between cheering excitedly and solemnly singing the Alter Rebbe’s nigun Keli Atah. But nowhere was the Chassidishe spirit of the camp more evident than in the impromptu farbrengens some bunks had. Or the counselor who showed his campers videos of the seven days of celebration in 770 after the verdict was handed down, communicating to them the joy of Hiskashrus in a manner more powerful than a thousand words.

Throughout the camp, in farbrengens and at the banquet, the young Shluchim were instilled with pride in their mission and empowered to continue being a positive influence on their surroundings. But more than what they were told was what they experienced. The chayus in davening and benching, the passion their staff exhibited for the Rebbe and Chassidus, the chassidishe lachluchis they absorbed during learning class and as the head counselor narrated the nightly Rebbe video. The inspiring virtual address they heard from Rabbi Moshe Kotlarsky, Vice Chairman of Merkos L’inyonei Chinuch, encouraging them to recommit themselves to being role models in their communities.  The visit of the veteran head Shliach of California, Rabbi Shlomo Cunin, who shared his own personal stories with the Rebbe. The impact these things made was enduring and immeasurable. As one camper put it “I will always remember the Chayus of every Tefilla. Even at the last Mincha when there were only thirty kids left in camp, the energy was incredible. I hope that this camp experience will provide me with the inspiration to keep davening like a chossid should”.

At the banquet, the children heard from their fellow campers their own experiences growing up on shlichus and the hachlatos they were taking to help perpetuate the impact of these exhilarating eight days. Each camper was also presented with their very own copy of the Tanya printed in camp, providing them with a tangible memento to take home with them.

“Providing such an immersive and exciting Chassidishe experience for the children of Shluchim, is making a vital investment in the future of Yiddishkeit,” says Rabbi Moshe Kotlarsky, Vice Chairman of Merkos L’inyonei Chinuch, the driving force behind this camp. “It is our hope that this camp will raise a generation of the Rebbe’s soldiers, dedicated to bringing the Rebbe’s message to the world with passion and joy.”

The exceptional staff was led by head counselors Mendel Pink and Moshe Rozenblatt, who provided round-the-clock chassidishe warmth and a positive environment for these precious children.

The camp is directed by veteran directors Rabbi Zalmy and Shterna Kudan and Rabbi Mendel and Rochel Loschak and facilitated in partnership with Rabbis Mendy Kotlarsky, executive director of Merkos 302, and Rabbi Mendy Shanowitz of MyShliach at Merkos 302.

This camp is organized and run by Shluchim for Shluchim. The executive committee overseeing the camp’s funding and operations are California Shluchim Rabbis Simcha Backman, Nachman Abend and Shlomo Bistritsky.

The Tzeirei HaShluchim Camp was made possible by generous benefactors, including Rabbi Moshe Kotlarsky, Mr. Shmuel Aizenberg, Mr. Sholom Leyton, Mr. Yosef Gorowitz, and many others.