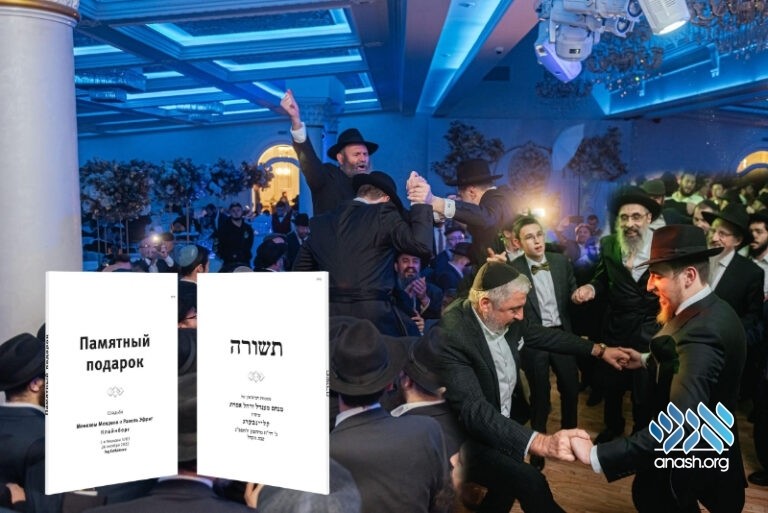 A special Teshura was distributed at the wedding of Mendy Kleinberg and Efrat Weisberg in Moscow, Russia containing secret reports that were sent to the Rebbe by the shluchim operating behind the Iron Curtain.

A very special wedding took place in Moscow last Wednesday. The son of Rabbi Boruch Kleinberg, Shliach to the Sokol-Aeroport district of Moscow, got married to the daughter of Shliach Rabbi Mordechai Weisberg, Director of Moscow’s Jewish communities. The wedding, which was officiated by Russia’s Chief Rabbi Berel Lazar, united all of Moscow’s Jews who danced together with great joy until the wee hours of the night.

Amongst the customary souvenirs (tshuros) distributed to the wedding guests, was a booklet compiled of the reports that were sent to the Rebbe by the shluchim who were sent behind the Iron Curtain during those years. With much effort invested into deciphering, translating, and appropriate layout, the final product was presented to an audience of eager readers.

It is well known that despite the challenges and hardships, Jewish life never stopped in the USSR. Ever since Stalin’s repression, there were underground communities, shechita, mikvas, cheders and yeshivas. The Frierdiker Rebbe and his son in law, our Rebbe, continued keeping in touch all this time, with chassidim and active Jews who led the underground movement. Although as soon as the opportunities presented themselves, most Jews who kept Jewish traditions, and especially Chassidim, left the USSR.

By the end of the seventies, the remaining small Jewish community was left without Rabbis or teachers, and there were no more cheders or yeshivas. It was then that the Rebbe began sending shluchim, who arrived as tourists, but instead of going sightseeing, they would meet with the local Jews, teach them Torah, give classes, and give them kosher food and Judaica objects from overseas. It goes without saying that all of this required real mesirus nefesh, as foreign tourists were constantly followed and their every move watched.

They worked very successfully and were conscientious about reporting to the Rebbe about everything that happened. They share in great detail about the lives of Anash during that period of time, the challenges they faced, the persecutions, their great mesirus nefesh, and how careful they were with the fulfillment of every mitzva to the smallest detail, including the above-mentioned chasan’s father and grandfather.

These reports were never publicized, and now, in honor of their firstborn son’s wedding, Rabbi Boruch Kleinberg and his family invested great efforts to attain these materials, to translate and lay them all out into a final presentation that leaves the reader breathless.

When reading these reports, one can clearly see the words of Dovid Hamelech in Tehillim come to life “those who sow with tears, will reap with joy”. The many Chabad Houses, and hundreds of Shluchim in the empire built up by Russia’s Chief Rabbi Berel Lazar, testify more than anything else to “reaping with joy”.

In appreciation to the two esteemed families, a sheva brachos was hosted by the Shaarei Tzedek Chesed Center in the Marina Roscha neighborhood, with many friends and supporters who assist the needy and indigent all year through the center’s many aid projects, in attendance.