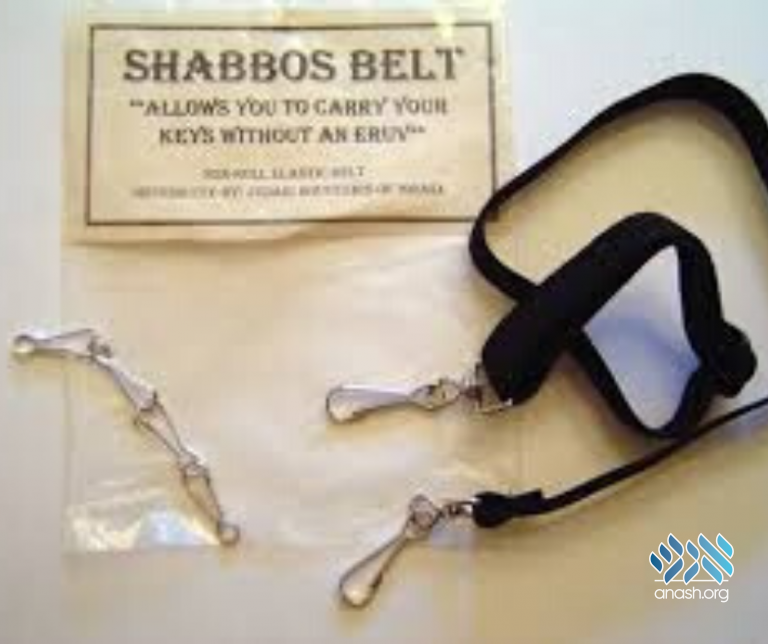 Can I wear a Shabbos belt over my shirt?

The prohibition of carrying on Shabbos does not include clothing or ornaments. Throughout the ages, Yidden have sought ways to carry a house key as part of their garments to allow them to take it outside.

To simply hang the key on a garment (belt, bracelet) does not suffice, since the key serves no purpose and it simply being carried. However, if it is an integral part of a garment without which it wouldn’t hold, it is considered a part of that garment for the duration of Shabbos.

One method of using it in a belt was to replace the tooth of the buckle—that goes through the hole—with a key. Another option, according to some poskim, was to wear a decorative silver key. A recent and more convenient method is to fashion a home-made belt out of elastic or string, and instead of tying the two ends directly to each other, they are securely attached to the two sides of the key, so that the key is what holds them together (some require two holes in the key to make it more dedicated for this purpose). Multiple keys can be made part of the belt in this manner using snap hooks.

This “Shabbos belt” must be worn in a way that a regular belt is sometimes worn. Thus, if that garment already has a belt or one’s shirt is tucked in, the Shabbos belt should be used on a different garment. Alternatively, one can unbutton some of the shirt buttons and use the Shabbos belt to hold the shirt closed.

Must you unlock the door while wearing the belt or may you take it off to unlock?

If the lock has a keyhole that completely penetrates the door, the keyhole is a reshus hayachid, and one standing in the public domain must unlock the door while wearing the belt. Most modern-day locks don’t penetrate, though one must take the key out and put it back on before actually opening the door.

When hiding a key in a building hallway or hotel lobby where an eruv chatzeros was not made, the key must not be transferred into the home and the key must be removed from the keyhole before opening the door. However, the key may be carried freely within the shared area, provided that it was left there before Shabbos.