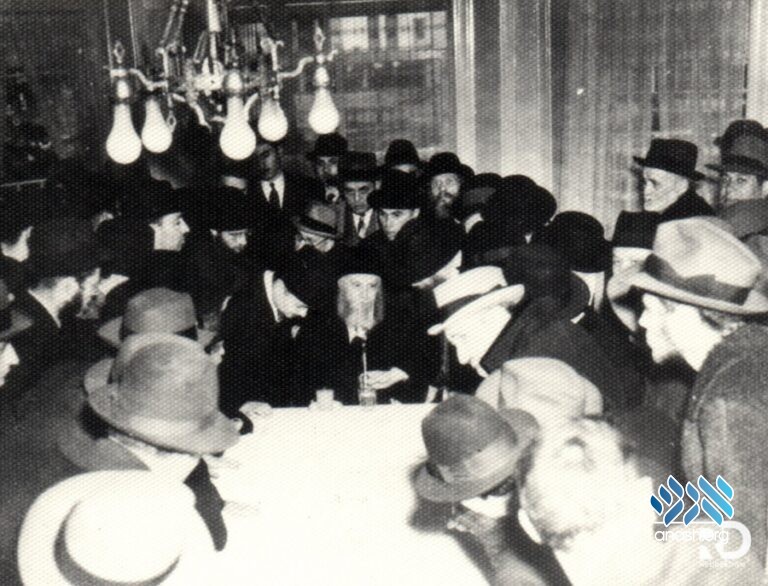 Motzei Shabbos Story: Just days before leaving Russia for the last time, the Frierdiker Rebbe issued a firm assurance to his chassidim. Some explained it to be metaphorical, while others insisted on believing the simple meaning of the words.

Reb Folleh Kahn once recounted: Following his release from prison on Yud Beis Tammuz 5687, the Frierdiker Rebbe resided for a short period of time in a small village near Moscow named Malachovka.

At some point during Elul, he returned to Leningrad and in the days leading up to the month of Tishrei, large crowds of chassidim arrived in the city to spend the festive month in the presence of the Rebbe.

This year, Tishrei by the Rebbe was not going to be like any other. After Tishrei, the Frierdiker Rebbe was going to Poland, leaving behind Russia for good, and so many Chassidim felt that this might be the last time they will ever see the Rebbe.
The Chassidim were crushed and broken as they sang from the very depths of their hearts: “az der   aybershter vet geben gezunt un leben…Hashem will grant us with health and life, so that we may be with our Rebbe.”

During the farbrengen on Simchas Torah, the Frierdiker Rebbe gave his firm assurance: My departure is merely from one place to another — limited to the realm of ’place’. We must meet again, we will meet again.  May Hashem grant that in the meantime, until then, there should be abundant goodness and much success, each according to his needs. Everyone individually must strengthen and maintain within themselves an inner hiskashrus.  And if you will fulfill that for which I have become a messenger to convey to you, then that for which I have been guaranteed will be fulfilled as well — to see you all again in the near future.

The Frierdiker Rebbe then gave detailed and specific instructions to the mashgichim and temimim of Tomchei Temimim.

The Rebbe’s holy words encouraged the Chassidim greatly and infused them with joy and hope. Nevertheless, there were a few who rejected this attitude. They were worried that in the absence of ever seeing the Frierdiker Rebbe, a crisis could take place among the Chassidim and so, in the spirit of “preceding the cure before the sickness,” they gathered everybody together and tried explaining that the Rebbe’s words were meant only as a wish while the actual fulfillment will take place in a spiritual sense, etc.

Their words were received by many without argument and the previous excitement was clouded with a deep sense of total despair. But a small group of young Chassidim continued to insist heatedly: We are simple people who understand things in their simple meaning and if the Rebbe promised us that we will see him again, then his words will be actualized!

Reb Folleh, who was counted among this group, finished with the following: “The facts speak for themselves; all those who clung to the Rebbes’ promise, did eventually merit to meet with him again b’gashmiyus.”