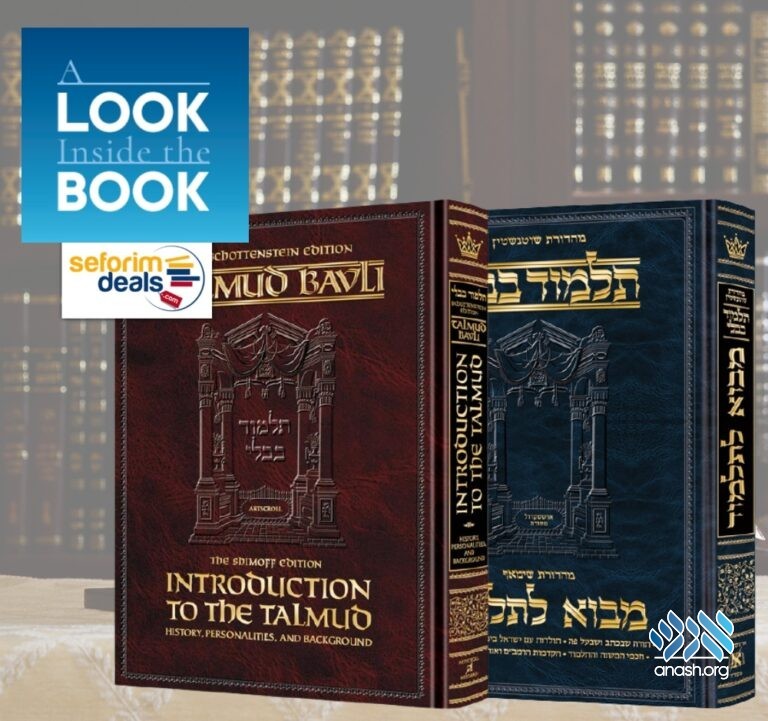 A Look Inside the Book: After producing their famed elucidated editions of the Talmud, Artscroll published a companion volume – Introduction to the Talmud. What does the new volume offer, and to what extent will it enhance your study?

Introduction to the Talmud

Artscroll’s acclaimed English and Hebrew elucidated editions of the Talmud now have a companion volume: Introduction to the Talmud: History, Personalities and Background.

In this review we will survey the content of this volume, and then examine the degree to which it serves its purpose as an introduction to the Talmud.

The Introduction to the Talmud begins with a section about Torah Shebaal Peh. The first chapter is a brief essay about the source of Torah Shebaal Peh, the role that it plays, and provides multiple reasons for why the Torah was given in this way.

We are then introduced to the 13 midos shehatorah nidreshes bahem. A general introduction explains how these midos are employed and who has the authority to use them, and then each of the midos are clearly explained, and illustrated with examples.

[One point that isn’t addressed satisfactorily here is the relationship between the well-known list of 13 midos given by R. Yishmael, and a separate list of 7 midos given by Hillel. We are told that R. Yishmael’s list includes all of the midos listed by Hillel, but according to the simple reading of the lists, one of Hillel’s midos is missing (see Halichos Olam 4:1). The reasons behind the differences between the lists are not explored (for a good treatment of this topic, see Kovetz Yesodos Vechakiros (5773 edition), pp. 619-620).]

The Works of Chazal

The second section of Introduction to the Talmud focuses on the foundational works of Torah Shebaal Peh. A chart lists all of the masechtos, a brief definition of their general topic, the number of chapters in the masechta, and the number of blatt the masechta contains in the Gemara.

Next is a list of other Tannaic works with brief descriptions. The various Midrashei Aggadah are merely listed without explanation, and Midrash Rabbah is listed as if it is a single unified work. The list of masechtos ketanos includes masechta Eretz Yisrael, without a note that this work is not extant.

This section concludes with overviews on the history of Talmud printing, an interesting explanation of the methodology of the Artscroll edition, and a guide to the various elements that appear on the standard daf of Gemara.

Historical Background to the Talmud

A much larger section gives us the historical background to the development of Torah Shebaal Peh. This section is based primarily on the acclaimed Doros Harishonim by Rabbi Yitzchak Eizik Halevi.

A series of lengthy articles tell the historical story of Jewish life and scholarship in Eretz Yisrael and Bavel, from the beginning of Bayis Sheini until the conclusion of the Talmudic era. Together, the various chapters of this section provide an excellent overview of the history of Torah Shebaal Peh, all in accordance with the mesorah of Chazal. These chapters are written in easy-to-read article style, with few sources and footnotes provided.

The section concludes with a map of Bavel and information about the centers of Jewish life and Torah learning.

The largest part of this volume, almost 350 pages, is devoted to biographies of around 300 of the most prominent Talmudic personalities. The biographies tell us when the Tanna or Amora lived; who his teachers, colleagues, and students were; and relate notable life events and stories. Their best known teachings in Halachah and Aggadah are quoted, and various events and stories are patched together to paint a picture of their personalities and character traits.

The introduction to this section informs us that the biographies are based primarily on the three-volume Toldos Tannaim Veamoraim, by R. Aharon Hyman, a great talmid chacham.

As an example, we will take the biography of R. Abahu. We are told that R. Abahu lived in Eretz Yisrael, and was a student of R. Yochanan. He had good relations with the local Roman authorities, and as a result served as the patron of the Yeshivah in Caeserea. R. Abahu was wealthy and of impressive appearance, and greatly respected by Jews and non-Jews alike. We read about his relationships with his colleagues and students, as well as his wife and five sons, all of whom were scholars in their own right.

A number of Talmudic passages show us that R. Abahu was also an expert in mathematics and medicine, and proficient in Greek. He had a comprehensive knowledge of Torah Shebiksav, and often explains difficult words. These skills made R. Abahu the perfect person to debate with heretics and expose their ignorance.

Various stories and teachings give us a view of R. Abahu’s character. He was exceedingly humble, teaching that “the world exists in the merit of those who make themselves as if they are non-existent (Chullin 89a).” He declined an appointment to serve as Rosh Yeshivah in favor of R. Abba, because R. Abba was poor and heavily in debt, and would benefit from the gifts usually given to the new Rosh Yeshivah. The midrash offers R. Abahu as an example of a G-d fearing person (Koheles Rabbah 7:18), and a number of stories show us how he cherished Torah and its scholars.

Finally, some of R. Abahu’s famous teachings are quoted. It is he who taught that no one can stand in the place of baalei teshuvah (Berachos 34b), and when we blow the shofar on Rosh Hashanah we are following his takanah to blow all of the three possible forms of the teruah sound.

Of particular interest are the biographies of Tanaim and Amoraim that had fascinating life stories, such as Reish Lakish, R. Akivah, and Acher. This section concludes with biographies for a number of the female characters of the Talmud, such as Beruriah, Hilni Hamalkah, and Rachel, the wife of R. Akivah.

This section concludes with a chart of the Tannaim and Amoraim, showing the generation as and locations in which they lived.

While learning Gemara we encounter the chachamim sporadically, learning one isolated teaching or story about them at a time. We generally don’t think of these holy transmitters of the mesorah as personalities, each with their own life story and individual character traits. Reading about them in their entirety in these biographies brings them these figures to life, which makes their ethical teachings more meaningful and inspiring to us. Specific sayings and teachings are also often illuminated in a new light when we know the context of the life story of the person that said it, as well as similar teachings related elsewhere.

The final section of this book contains translations of three fundamental texts about the history of Torah Shebaal Peh.

The Rambam’s hakdamah to his pirush hamishnayos is essentially the Rambam’s version of the Introduction to the Talmud. This classic text is presented with a new and clear English translation, with copious footnotes explaining the text.

Artscroll are known for their ultra-traditional approach to texts, using the traditional text even when we now possess superior versions. Nowhere is this more pronounced than here, where after explaining that we now possess Rambam’s handwritten final version of the hakdamah, published with a new translation by R. Yosef Kapach, Artscroll nevertheless choose to use the old, inferior text translated by R. Yehudah Alcharizi. But the new editions are consulted, and used to clarify the text when the old version is ambiguous.

The Rambam’s hakdamah to pirush hamishnayos is followed by his much briefer hakdamah to Mishneh Torah, also with a clear translation and many explanatory footnotes.

Finally, the book concludes with an excellent translation of the Igeres R. Sherira Gaon. This letter, written by one of the final great Geonim of Bavel, is the single most important source for the chronology of Chazal and Torah Shebaal Peh.

R. Sherira Gaon was the Rosh Yeshivah in Pumbedisa, the very yeshivah that Abaye and Rava had lead hundreds of years earlier, and he possessed intimate institutional knowledge of the history of the Amoraim, including precise dates. R. Sherira Gaon is also virtually the only source provides us with the names and information concerning the little-known Rabbanan Savurai and the early Geonim.

The Hebrew version of the Introduction to the Talmud is generally identical with the English. However, the Hebrew version contains many more footnotes with far more detailed information. In the biography section, the number of Hebrew footnotes is around double that of English.

Unlike the English edition, the Hebrew Mavo Latalmud does use a new, manuscript based text for the Rambam’s hakdamah to pirush hamishnayos. Both of the Rambam’s hakdamos are published with interpolated words and sentences clarifying the flow and meaning of the original.

The Aramaic of Igeres R. Sherira Gaon is accompanied by a Hebrew translation, and a second brief latter of R. Sherira Gaon explaining the different titles used to refer to Tannaim and Amoraim is also included.

Due to these advantages, readers that are comfortable in Hebrew should prefer this edition.

Artscroll’s Introduction to the Talmud is an excellent and professionally produced work, as readers have become accustomed to expect from this publisher.

The background provided about the development of Torah Shebaal Peh is important, albeit somewhat brief. The biographical sketches of Tannaim and Amoraim, which is the bulk of this book, is fascinating, but isn’t integral to know as an introduction to Talmud study. For Talmud study in in our generation there is a different, more pressing, introductory need.

The primary difficulty new students of Gemara have is learning the Gemara’s unique method of analysis. The way every passage of a Mishnah is dissected and analyzed, proofs adduced and refuted, comparisons made to other sources and rejected, is foreign to the uninitiated, and an explanation of this system of logic, illustrated with examples, would serve as a much needed introduction to the study of Gemara.

In addition, key Talmudic concepts such as kinyan and the various methods of generating it, the different types of chazakos, the migu argument, and the like are unique to the Gemara. An encyclopedia of key Talmudic concepts, concisely defined and thoroughly explained, is another vital introduction to Gemara study needed in our generation.

Rabbi Adin Even-Israel’s Reference Guide to the Talmud is one work that gives this style of introduction. Artscroll would certainly produce an excellent introduction in the aforementioned style if they set out to do so.