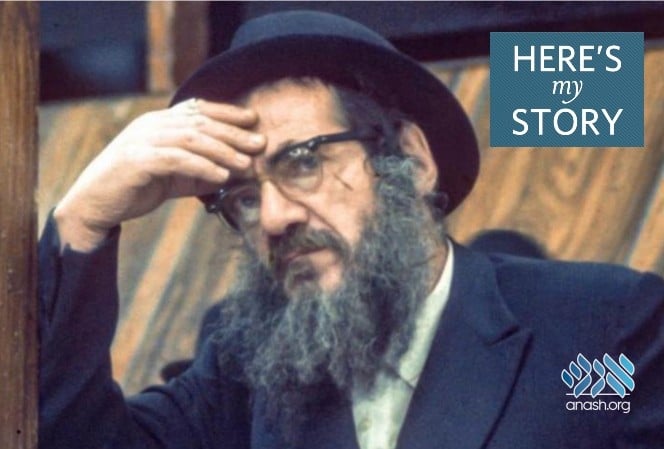 One Thursday night in the summer of 5711, the Rebbe walked into the study hall at 770 and made an announcement: “There is a shul in Williamsburg called Nesivos Olam. Sitting there are young men, and it would be worthwhile to bring them closer to Chabad Chasidus.”

Rabbi Aharon Blesofsky has worked in the furniture industry for many years. He was interviewed in September of 2020.

My grandfather came to the United States in 1910. He belonged to the Karlin Chasidic group and originally came from a city called Blezov, in Russia, which is how my family got its last name. How he managed to remain a religious Jew even after coming to America is a story in and of itself.

He met and married my grandmother, who was also of Chasidic descent, and when my father was born in 1921, they named him Shneur Zalman after her grandfather. His parents sent him to Torah Vodaas, which was a religious yeshivah in the Lithuanian style, since there were only a couple of options available to them in New York at the time. Every day he’d schlep over the Williamsburg Bridge, from the Lower East Side of Manhattan to the yeshivah, and it was there that he got to know the Malach – “the angel.”

The Malach was a nickname for Rabbi Avrohom Dovber Levine, who was also a story unto himself. He was originally a respected figure within the Chabad community in Russia, but parted ways with it, before coming to America in the ‘20s.

For a time, he taught some of the yeshivah students from Torah Vodaas, and attracted a following among them. While some of their peers assimilated and stopped keeping Shabbat, Rabbi Levine’s students remained very observant. They began to dress in a distinctive Chasidic style, with long peyot, long coats, with the brims of their hats turned up – the whole nine yards. All of this was very unusual in America at the time; normally people just wore suits and fedoras with the brim down; and so people began to call them “the Malachim” – the angels. After Rabbi Levin passed away in 1938, they stuck together.

My father hung onto this little Chasidic group, or as we called them, the “gang.” Eventually, they got a building of their own, with space for a yeshiva and a little synagogue – a shtiebel – in Williamsburg. By the time he married my mother in 1941 and started a family, he was a full-fledged Malach. He would go to that shtiebel, and had a custom to stay there late on Thursday nights, studying Torah.

This is where Lubavitch comes in. By the time I was born, in 1951, the Rebbe had succeeded his father-in-law as leader of the movement. One Thursday night in the summer of that year, the Rebbe walked into the study hall at 770, in Crown Heights, and made an announcement.

“There is a synagogue in Williamsburg,” he began, without speaking to anybody in particular. “It is called Nesivos Olam. Sitting there are some young men, and it would be worthwhile to bring them closer to the teachings of Chabad Chasidus.” And then he turned around and went home.

There were only a handful of chasidim present at the time and they began debating what to do. They had never even heard of a synagogue by that name, and it was already after 10 PM, so they figured that this synagogue would already be closed. I only know the names of three people who were there, one of whom was Rabbi Moshe Dubinsky, who was known to be a true chasid.

“If the Rebbe said that we should go, then we have to go now,” he declared.

With that, he convinced the others. They all got on the B44 bus, straight to Williamsburg, came out, and started asking around:

A synagogue called Nesivos Olom? Nobody had heard of it. After asking some more people, and still nothing, they were ready to give up. But just before heading back to the bus stop, they stopped one more Jew on the street: “Sir, do you perhaps know where the Nesivos Olam synagogue is?”

It turns out that the official name of that shtiebel was Nesivos Olam. Nobody called it that, but that was what they were looking for.

“It’s on Hewes Street, between Marcy and Lee. If you see a building with the lights on, that’s the Malachim shtiebel, but if you can’t find it, that means it’s already closed for the night.”

The lights were on. They walked in and found my father sitting there studying Torah, as was his custom on Thursday nights. They started a conversation and wound up talking, arguing, and debating Torah and Chasidic concepts for a few hours. When it came time to leave, they thought that was the end of it.

But only a few hours later, one of the students from the group, Moshe Gurkov, walked into 770 for the morning study period which began at 8 AM. As he came through the doors of the study hall, he saw a fellow sitting there – it was the guy from last night.

“Shalom Aleichem,” he offered in greeting. “What are you doing here?”

“We were in the middle of a conversation. I would like to continue,” replied my father, and the rest is history.

So that’s how my father – and all his descendants – became Lubavitchers. He wasn’t the only one from the gang who came, but he was the one who broke the ice. And all that was a direct result of the announcement the Rebbe made on that particular Thursday night, and the initiative some of his young Chasidim took to follow through.