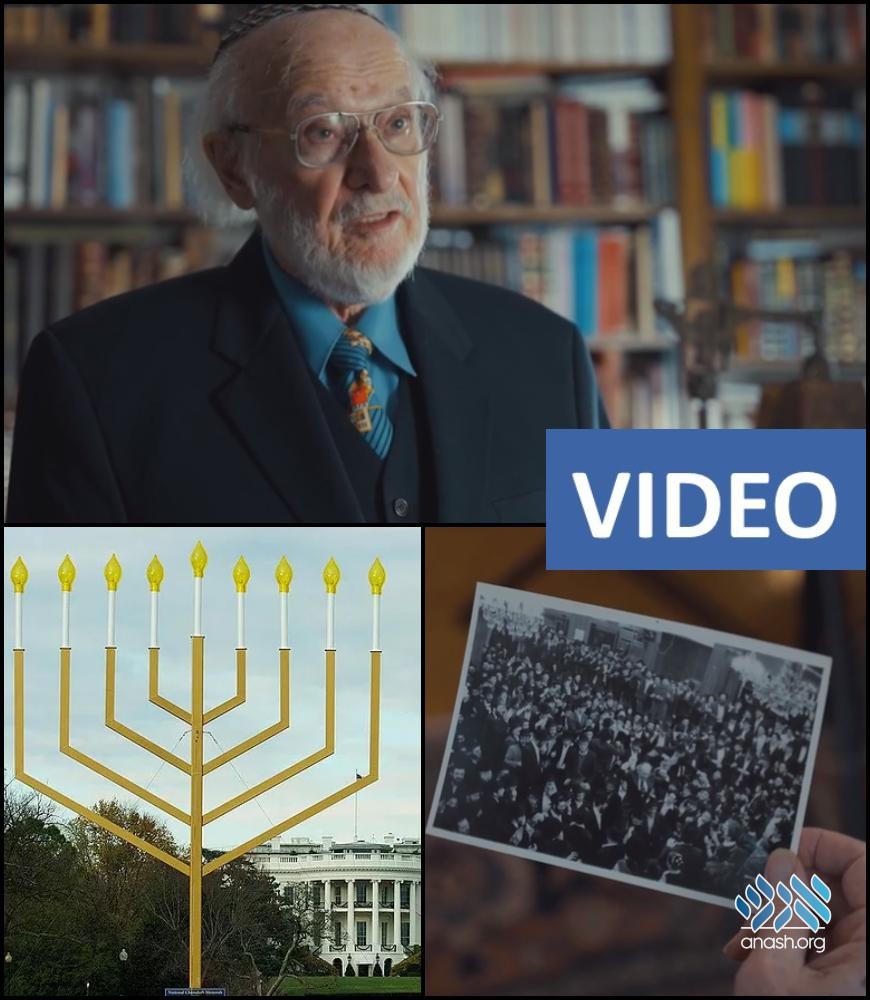 Guest speaker at the Kinus Hashluchim Grand Event was Attorney Nathan Lewin, who told of his part in the court case for the Rebbe’s Seforim and the victory on Hey Teves, as well as his decades-long fight for the right to have Menorahs displayed in public areas.

A Conversation with Attorney Nathan Lewin

When Nathan Lewin addresses the virtual International Conference of Chabad-Lubavitch Emissaries (Kinus Hashluchim) as its keynote this Sunday afternoon, there will be no need for an introduction. Over the past half-century, Lewin has made a name for himself as a talented litigator and become famous as one of the nation’s preeminent defenders of the Bill of Rights, particularly the religious liberties enshrined in the First Amendment.

Lewin and his daughter, Alyza Lewin, represented Menachem Zivotofsky for 18 years in his family’s quest to have Jerusalem, Israel, written in Zivotofsky’s U.S. passport. Zivotofsky was just granted such a passport at the U.S. embassy in Jerusalem this October. Lewin likewise came up during the recent Supreme Court nomination process, describing now-Justice Amy Coney Barrett’s work on behalf of Jewish causes while she was a young associate at Lewin’s law firm in 1999-2000, including the pro bono defense of a public menorah display in Jersey City, N.J. Barrett filled the seat of the late Justice Ruth Bader Ginsburg, with whom Lewin had a long and warm relationship. In fact, Ginsburg’s office called Lewin shortly after she joined the Supreme Court for his guidance in affixing a mezuzah to her chambers.

Throughout his career, Lewin has been known to be a passionate advocate for causes he believes to be just. “In interviews,” The New York Times wrote about him in a 1988 profile while he was defending U.S. Attorney General Edwin Meese, “several lawyers, most unabashed admirers of Mr. Lewin, faulted him for sometimes being too ardent in his advocacy—a criticism Mr. Lewin accepts. ‘I get … carried away by what I think is right,’ ” he told the paper.

Perhaps it was this, as well as his reputation for tenacity—a decade earlier, Lewin sued the Times into admitting it had erred and issuing a correction pertaining to Lewin’s time defending former President Richard Nixon—that in the summer of 1985 caught the attention of Rabbi Yehuda Krinsky, chairman of Merkos L’Inyonei Chinuch, the educational arm of the Chabad-Lubavitch movement, and a secretary of the Rebbe.

Some months earlier, librarians at the Library of Agudas Chassidei Chabad had noticed that rare books from its priceless archive collection were going missing. Surveillance footage showed this to be the work of the estranged grandson of the Sixth Rebbe, Rabbi Yosef Yitzchak Schneersohn, of righteous memory, who after being confronted claimed the books to be his personal inheritance. When he refused to stop selling these valuable books on the open market, Krinsky turned to Lewin.

“I got a call in the middle of the night from Rabbi Krinsky,” Lewin recalls to Chabad.org. “That’s how it began on my end.”

Lewin immediately sought and obtained a restraining order enjoining the grandson from selling any more of the books in his possession, and then filed suit in federal court in Brooklyn to establish, as the Rebbe maintained, that the library was a communal possession belonging to the Chabad-Lubavitch community. The Rebbe did not weigh in on every step of the defense’s work, insisting this was the role of the team of lawyers led by Lewin, but did provide insight that proved to be crucial.

“In our initial meeting [of lawyers] with the Rebbe he pointed at the letter written [by the Sixth Rebbe] to [Alexander] Marx [the librarian of Jewish Theological Seminary in New York] as the key,” says Lewin. In it, the Sixth Rebbe had made clear that the library was not his own personal property but a valuable resource for the entire Jewish people, and belonged to the movement he led. “We highlighted that piece of evidence and Judge [Charles] Sifton subsequently quoted it in its entirety.”

“The Rebbe was totally cognizant of every step we were taking, he read the transcripts, all the pretrial proceedings,” recalls Lewin. “I was astounded by how familiar he was with everything that had been said during the hearings.”

The months Lewin spent shuttling back and forth between Washington, D.C., and New York preparing for the case, followed by the 23-day-long trial, ultimately paid off. On Hei Tevet 5747 (Jan. 6, 1987), Sifton ruled that the library in its entirety belonged to the Lubavitch movement. In an age before WhatsApp, the news rocketed around the globe with jubilation breaking out at Chabad headquarters in Crown Heights, Brooklyn—a short distance from the federal courthouse in downtown Brooklyn—as well as synagogues and Jewish communities everywhere.

“I want to say that the Nat Lewin I met a year-and-a-half ago is not the same Nat Lewin … that we’re about to hear from,” Krinsky told a packed, euphoric audience at a celebratory event held two nights after the court victory. “This is the Nat Lewin—Reb Nosson Lewin—who will be written about for generations … in the history of Lubavitch as one of the heroes of this [painful story].”

“I thought we had a very, very strong ground for sustaining Judge Sifton’s decision, so I was pretty confident in terms of the appeal,” reflects Lewin. “But it was certainly a brachah [blessing] that it was affirmed.”

Lewin has fought countless religious liberties cases in his decades of practice, particularly those pertaining to the Jewish community. Among the cases he has argued, including dozens before the Supreme Court, have been the rights of Jews to wear kippahs and beards in the military; the humaneness of shechitah; and the right to place a Chanukah menorah on public property. As his daughter and law partner at Lewin & Lewin, Alyza, has pointed out, “there is no legal issue that has faced the Jewish community in the United States in the past half-century that does not have Nathan Lewin’s fingerprints on it.”

Of course, the landmark menorah case and the many follow-ups Lewin fought have a particular connection to the 5,000 Chabad emissaries he will be speaking to on Sunday. Not long after the Rebbe first launched his Chanukah awareness campaign in the early 1970s, Chabad emissaries—first in Philadelphia and San Francisco, then around the country—began erecting giant public menorahs to share the message and inspiration of the Chanukah lights with one and all. This included a 36-foot-high menorah erected outside of the White House, inaugurated by President Jimmy Carter in 1979.

Chabad of Western Pennsylvania followed suit in 1982, placing a menorah outside of Pittsburgh’s City Hall with the mayor’s permission and participation. Four years later, the American Civil Liberties Union sued Pittsburgh and Allegheny County, a case that wended its way to the Supreme Court of the United States. Lewin would be the one to defend the Jewish peoples’ right to place a menorah on public property.

Ultimately, Lewin explained to an audience at One-to-One, a 12-hour symposium held at the New York Public Library in 2016 exploring the Rebbe’s social impact, it was the story of “how the Rebbe prevailed … and changed the course of First Amendment law in the United States.”

In a 6-3 decision handed down on the last day of their session in July of 1989, the Supreme Court ruled for the constitutionality of the menorah. Justice Henry Blackmun’s majority opinion even contained the blessing for lighting the Chanukah menorah—twice. The case did not end there. When the new mayor of Pittsburgh denied the menorah request the next year, Lewin ultimately got an emergency ruling from Justice William Brennan, received an hour before Shabbat and the start of Chanukah that year, allowing the menorah to go up once again.

In Pittsburgh’s case, the menorah had stood next to holiday symbols of other religions, and so in 1992, Chabad’s menorah in Grand Rapids, Mich., was challenged on the grounds that it stood alone, unaccompanied by any other symbols. Once again, Lewin successfully defended the menorah, as he did in cases that followed. While Lewin continues to assist anyone wishing to place a menorah on public property to this day, by now, thanks to his work, the legalities surrounding the topic are a matter of settled law.

“The menorah litigation in the United States was a perfect example of how the Rebbe’s insistence on an attitude towards religion in America ultimately prevailed,” Lewin told the audience at One-to-One.

Lewin has long been a familiar face at the Kinus. “I make an effort to come because this is always an amazing show of Jewish spirit and the worldwide impact that Chabad has,” he told this writer at the 2013 conference. “You sense it in the room when you come here together.”

His addressing this year’s gathering—all virtual and so different than the palpable energy felt when the thousands of emissaries and their guests fill one giant room—is all the more poignant considering the hope and light that springs forth from the lights of the Chanukah menorah, and his part in protecting their flickering flames.

“During these days of the pandemic, it’s all the more important to keep the light of the Chanukah menorah burning,” says Lewin. “Even though the number of people who will appear at Chanukah menorah-lightings will be smaller, the lighting itself is very, very significant because of what it conveys … . It’s a blessing for me to be able to be a part of this, maybe particularly at this time when otherwise the world seems to be so dark.”