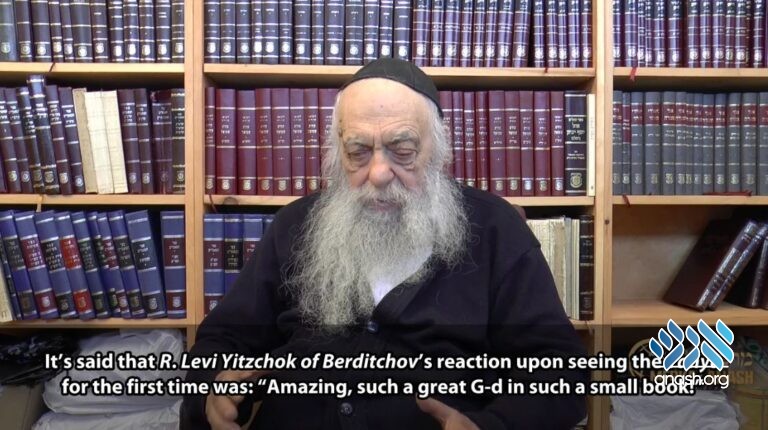 In the letter which the Alter Rebbe wrote to one of his colleagues upon being released from prison, he notes that he was redeemed on the 19th of Kislev, and that it was just after he had recited the verse “padah b’shalom nafshi,” “My soul was redeemed in peace,” before he could proceed to the next verse.

Clearly these aren’t just reminiscences about the circumstances surrounding his liberation, but serve to illustrate the significance of his release. This is especially true in light of the fact that the Alter Rebbe wasn’t arrested and redeemed as a private individual, but rather in representation of Chassidus. What is the significance of these details?

The relevance of the 19th of Kislev is rather apparent, considering that it is the Mezritcher Maggid’s yahrtzeit. However, room remains for further elaboration on this, as well as the connection to padah b’shalom.

In one of the Rebbe’s Reshimos (notes), the Rebbe dwells on the meaning of the number 19. In Kabbalah, the number 19 represents the miluy (filling letters) of Hashem’s name. Hashem’s name has the numerical value of 26, but when the letters themselves are spelled out (yud-vov-daled, hei-alef, vov-alef-vov, hei-alef) the total is 45. This means that the miluy of Hashem’s name, the hidden characters completing the primary letters themselves, have the numerical value of 19.

There are two, seemingly contradictory explanations for the significance of the hidden letters of miluy. Let’s take alef as an example, which is sounded as “ah” but referred to in conversation as alef, incorporating the letters lamed and pei as well. On a basic level, it seems that “ah” is more essential, whereas the use of extra letters is a convention we resort to only for the sake of communication. According to this explanation, these extra letters are inferior.

On a deeper level, however, the secondary letters are actually greater than the primary letter. This can be compared to a teacher who only expresses so much in his statements, leaving more personal and profound insights unsaid, perhaps to be gleaned at some later point. Similarly, the lamed and pei of the alef represent the alef’s deeper aspects that are not immediately apparent.

How does all this connect to Yud-Tes Kislev?

The Baal Shem Tov introduced a novel concept, that Hashem is one to the exclusion of all of existence. However, the Alter Rebbe took this idea, which until then had remained in the realm of pure faith, and explained it in a rational fashion, Chabad. This isn’t to say that the realism of emunah was watered down into a more distant, second-hand intellectual exercise. Quite the contrary; Chabad succeeded in transferring the original concept in its entirety into the world of intellect.

It’s said that when R. Levi Yitzchok of Berditchev saw the Tanya for the first time, he said: “Amazing, such a great G-d in such a small book!” His comment about the book’s small size wasn’t a reference to the number of pages. Rather, it was an observation about how limited the intellect of a created being, even an angel, is when compared to the infiniteness of Hashem. The logical inference would therefore be that it’s impossible to capably convey G-d’s greatness within the confines of a “small book”—the limited capacities of human logic. At first glance, it’s either one or the other.

A person once maintained that G-d’s powers were so limitless that he could run an elephant through the eye of a needle. But how? He explained that this can be accomplished either through compressing the elephant or through widening the hole. But he missed the point. The truth is that Hashem is fully capable of accomplishing this feat while the elephant and needle remain unchanged, however impossible this may sound.

Similarly, there’s nothing impressive about explaining Hashem in rational terms, where His greatness is minimized to the degree that it’s understandable. Neither is it extraordinary to lift intellect to a greatly refined level until it can grasp G-dly concepts. The Alter Rebbe remarkably succeeded in putting a “great G-d” into a “small book.” Tanya captures pure, untouched emunah and makes it accessible to anyone, while remaining in their current intellectual state.

This idea is hinted in the number 19, the miluy of Hashem’s name.

When viewed superficially, miluy means to express what something is to others. This seems to be an act of shrinkage, where the idea is diluted to meet the capacities of the recipient. But this is where the second approach to miluy comes to play, where it represents the depth and very essence of the idea.

Although it appears that lofty ideas cannot be conveyed to others without being sacrificed in the process, this is only when one has not tapped into the idea’s etzem, its essence. The etzem remains authentic no matter the form it takes, whether it is expressed in lofty terms or in terminology the regular layman can understand. This is the accomplishment of Chassidus Chabad: to unlock the etzem, thereby allowing a “great G-d” to be understood by imperfect human intellect—a “small book.”

The Enemy’s on Your Side

This idea is further connected to the verse the Alter Rebbe recited when he was released, padah b’shalom. The deeper meaning of padah b’shalom, redemption in peace, is that the nefesh ha’elokis is held captive by the nefesh ha’bahamis and needs to be redeemed. This can take place, however, in either a militant or peaceful fashion. By way of example, a real-life captive can be redeemed from prison by overpowering the guards. In such a case, although the enemy has been defeated, he remains an adversary. To redeem in peace means that the jailors themselves are somehow persuaded to transform their own position into one advocating that the prisoner be redeemed.

Likewise, one can redeem the nefesh ha’elokis by escaping physicality and abandoning intellect in favor of faith. However, in such a scenario the adversary is still there; the nefesh ha’bahamis remains unchanged. Yes, the soul has been redeemed, but it was not done with peace.

“Pada b’shalom” means to transform the adversary so that it, too, sides with G-dliness; to fuse faith with human intellect. This is alluded to in the continuation of the verse: “ki b’rabim hayu imadi, because the many were with me.” According to its basic meaning, the verse was said in the context of Dovid’s war with Avshalom, and he attributes his victory to the fact that “the many were with me”—Avshalom’s men, too, prayed on his behalf.

Likewise, on a deeper level, yachid—singularity—represents G-dliness, while rabim indicates the multiplicity of what is detached from Him. Padah b’shalom is accomplished when the rabim themselves join the forces of holiness, preparing the world for the era of Moshiach, when the world itself will be a vessel to G-dliness.