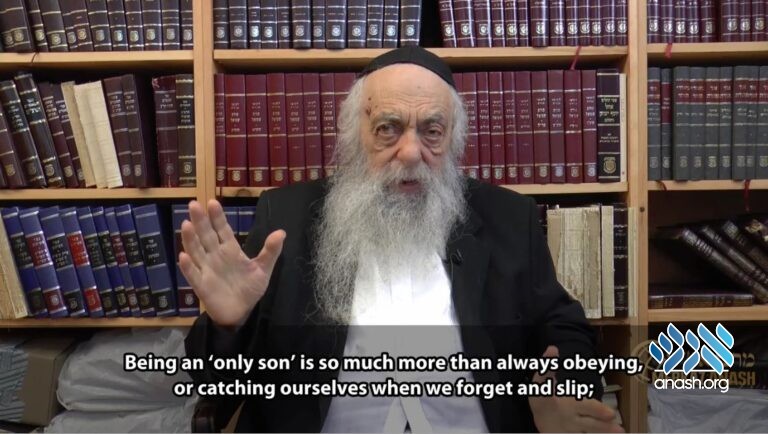 Watch: A short lesson by Reb Yoel Kahn on Yom Kippur with English subtitles and transcript.

Watch a short lesson by Reb Yoel Kahn on Yom Kippur with English subtitles and transcript.

This requires explanation. How can the mere day of Yom Kippur erase a person’s sins?

Were the atonement of Yom Kippur to consist simply of the waiving of punishment for one’s sins, we could understand. However, the kaparah of Yom Kippur is much more than that. Kaparah also translates as wiping away, meaning that Hashem wipes away the grime and kelipah produced by aveiros. How can this kelipah be removed just like that, without any effort on our part?

The fact that actual teshuvah erases the kelipah can be somewhat understood. Sefarim explain that the kelipah created by an aveirah consists of a “body” and “soul”: the body is created from the act of the sin, while the soul is derived from the resulting pleasure. When a person does teshuvah, the feelings of remorse—the opposite of pleasure—undo the soul of the kelipah, while the vidui, the verbal expression of regret and resolve, destroys the kelipah’s body. But how can Yom Kippur itself have the same effect?

This is especially difficult if we say that there is no requirement of teshuvah. However, even according to the Rambam, teshuvah is merely a side condition, and it is the day itself that atones. How does that work?

(We might have understood the atonement of Yom Kippur as being achieved through repentance. Although teshuvah is effective throughout the year, we know that during the Aseres Yemei Teshuvah, it is more potent and acceptable than the rest of the year. Similarly, we would have explained that the teshuvah of Yom Kippur is of even greater quality. However, this is not the case; it is the day of Yom Kippur itself that atones, and teshuvah is just a side requirement.)

Is the Eighth First or Last?

Another point about Yom Kippur is that it is associated with the number eight.

Yom Kippur was preceded by seven days during which the Kohen Gadol prepared for the avodah, making Yom Kippur the eighth day. The Gemara compares this to the seven days of miluim, which was followed by the revelation of Hashem’s glory on the eighth day.

Explaining the uniqueness of the number eight, the Kli Yakar writes that creation is characterized by systems of seven (for example, the seven days of creation), while eight refers to Hashem. Chassidus takes this a step further and explains that the level of Elokus associated with the world is also included in the number seven. Eight signifies a level of Elokus that is beyond creation (higher than hishtalshelus).

The number eight is associated with milah, which is performed on the eighth day, following a full circuit of seven days. This also connects with Yom Kippur, as the Midrash states: “In which merit would Aharon enter the Kodesh Hakodoshim? In the merit of milah.”

What is the significance behind this difference?

Get Ready, Get Set, Forget

Even when discussing a level of Elokus that is beyond hishtalshelus, it is possible for it to have somewhat of a relation to hishtalshelus. Therefore, although it is higher than the seven (hishtalshelus), it is preceded by and attained through them.

But there is yet a higher level which has no relation to hishtalshelus at all. Such a level cannot be reached by prefacing the seven, as it stands alone and has nothing at all to do with them.

Similarly, when one plants a seed in the ground, the seed must first rot, and only then will a fruit-bearing tree emerge. Since the tree has no relation to the seed, the seed must disintegrate to make way for the tree.

However, if a seed will not be planted, the tree will not grow either. Although the tree is very different from the seed, there is somewhat of a relation between them. Therefore, the seed must be placed in the ground and decay, and only then will the tree grow. Similarly, R. Zeira needed to first study Talmud Bavli and forget it, and only then was he able to master Talmud Yerushalmi.

This all portrays the first level, which is beyond hishtalshelus yet shares something in common with it ever so subtly. This results in the above-mentioned paradox: It must be preceded by the first step, but that step must then be removed.

Yom Kippur includes these two levels. There is the dimension of Yom Kippur that is beyond a person’s regular avodah, but at the same, it has some type of relation to it. Then there is a higher dimension that is entirely beyond human capacity whatsoever.

Why indeed does a Jew do teshuvah? After all, he has sinned, thus removing from himself the yoke of Heaven. What is it that bothers him?

The reason is because deep down every Jew desires to fulfill Hashem’s mitzvos and stay away from aveiros. The only reason he might sin is because the yetzer hara gets in the way (as the Rambam explains). When this inner feeling comes to the fore, his misconduct troubles him and he does teshuvah.

However, there is a dimension that is much more profound.

We know that a Jew remains a Jew even if he has sinned. However, this can be understood in two ways (both of which are correct).

Imagine a king who has perfect character traits and every other positive quality. His son, the prince, receives the best education, growing up immersed in intellectual pursuits and noble middos. Unfortunately, the prince veers off the correct path and becomes a murderer and thief.

It is obvious that this behavior does not define the prince’s true character. However, this itself can be explained in two ways. One way of looking at it is that the prince’s negative conduct is only external; deep down he still possesses the same virtuous middos and wants to do the right thing.

While this is true, there is a much deeper dimension at play. The prince is the king’s son. He has an essential connection with his father; he loves his father and his father loves him. The fact that he still retains good middos is merely a derivative of this connection.

Similarly, when we say that a Jew remains a Jew despite his sins, this does not only mean that his behavior is external and deep down he wants to do what’s right. Rather, it means something much deeper: He will always be Hashem’s child. Hashem states that “No matter what, you are My children;” we have an essential connection with Hashem as His children.

There are three dimensions in a Jew’s relationship with Hashem.

One dimension is a Jew’s revealed connection to Hashem, through the regular conduct of following the path of Torah and mitzvos. This can be compared to ordinary fire, which can become extinguished. Similarly, this connection can become compromised if a Jew does not act as he should.

When this occurs, he must tap into the second dimension, in which his relationship with Hashem is still whole. This can be compared to a hidden “fire” latent within a flint stone. This type of fire cannot become extinguished; even if the stone was submerged in water for decades, a spark will emerge when it is struck.

However, even this deeper dimension consists of “fire,” namely, a Jew’s inner, unlimited desire to fulfill Torah and mitzvos which can never be weakened. There exists yet a third dimension—“Hashem and Yisroel are one.” We are Hashem’s children and are one entity with Him. This cannot even be described as a connection without limitations; no words can properly express it.

Depth of the Day

We can now understand the two dimensions of Yom Kippur.

The concept of Yom Kippur as the eighth day refers to a level that is beyond hishtalshelus but still has some relation to it. Although the preceding level must be removed to make way for the higher level, it is still a necessary prerequisite. This reflects the idea of teshuvah. From this point of view, Hashem and Bnei Yisroel are two separate entities (as it were); however, our connection is so strong that it remains intact even when we don’t act properly. The aveiros and resulting filth exist, and teshuvah erases them.

But Yom Kippur is much more than that. It is about us as Hashem’s children. The concept of aveiros, of positive qualities versus negative qualities, is not part of the discussion to begin with. It’s about something altogether different—“Hashem and Yisroel are one.”

This is what it means that Yom Kippur itself atones. It doesn’t mean that there is a sin and it is subsequently erased; rather, in this dimension, there are no aveiros.

This level is represented by the initial spray of blood in the Kodesh Hakodoshim. It is not preceded by seven, because it has no relation to hishtalshelus at all.

If so, why is this spray followed by seven more? Once we have this dimension, what more is necessary?

Despite the greatness of this essential connection, it must be drawn into the details of a person’s conduct and character. There were individuals who were prepared to give up their lives for Hashem—a feeling originating from the etzem haneshamah—yet, once the need for mesiras nefesh dwindled down, it was not as perceptible. This is because the etzem hadn’t affected their revealed kochos.

This is why the first spray is followed by an additional seven, to imbue the etzem into the seven middos. Similarly, although Yom Kippur itself atones, we must also do teshuvah.

The essence of Yom Kippur especially comes to the fore during ne’ilah, the fifth tefillah, corresponding to the fifth level of the neshamah, yechidah. Ne’ilah means lock, as all gates are closed, leaving Hashem and Yisroel alone together, to the exclusion of anything else. At the same time, Yom Kippur as a whole is referred to as “a day that requires five tefillos,” as the power of ne’ilah permeates the details of the other four tefillos as well.