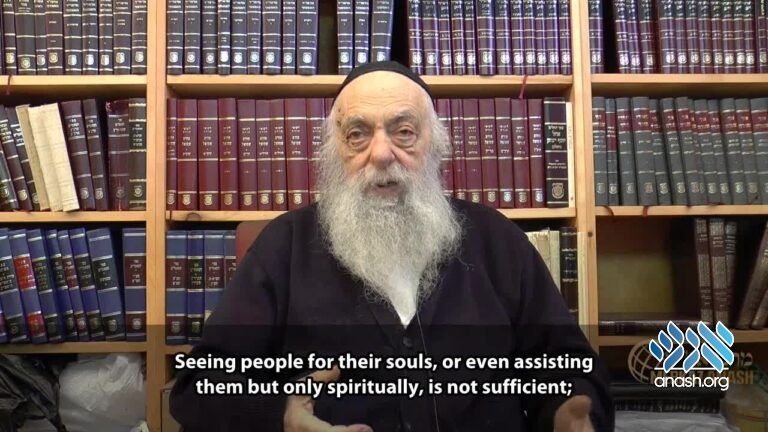 Watch: A short lesson by Reb Yoel Kahn on Sukkos with English subtitles and transcript.

Watch a short lesson by Reb Yoel Kahn on Sukkos with English subtitles and transcript.

The Yom Tov of Sukkos features a number of mitzvos. There is the fact that it is a Yom Tov, just like Pesach and Shavuos, and then there is the added joy of Sukkos associated with simchas beis ha’shoeiva. But in addition to this, there are two mitzvos unique to this Yom Tov: we are commanded to take up residence in a sukkah as if it were our home, and to fulfill the mitzvah of the four minim.

Lulav in the Sukkah

Although these are two separate mitzvos, the Alter Rebbe cites the Arizal as stating that it is ideal to make the brachah on the four minim while inside the sukkah.

However, the Rebbe once called the story’s veracity into question, since there is in fact halachic basis for making the brachah in a sukkah. We are supposed to live in a sukkah as we would in our own home. Any activity significant enough to us to do at home and not in the street should be done in the sukkah. Making a brachah on the four minim is certainly an important activity; we wouldn’t do it on the fly in the street, rather at home or in shul. It is only logical that it is preferable to do it in our current home, the sukkah!

If there are indeed halachic grounds for this custom, why does the Alter Rebbe appear to attribute it to the Arizal? The reason is because according to the above explanation, shaking the lulav in the sukkah is done to properly fulfill the mitzvah of sukkah, through conducting one’s activities there. By stating that shaking the lulav is better done in the sukkah, the Alter Rebbe is saying that one also fulfills the mitzvah of lulav in a more superior manner when it is done in the sukkah.

(In fact, according to the Rebbe, this latter point also has support in earlier sources, so the story with the Rogotchover is difficult to believe.)

Why indeed is it better to shake the lulav in the sukkah, although it is seemingly a separate, unrelated mitzvah?

Both mitzvos of sukkah and the four minim share a common denominator—the theme of achdus, unity. Regarding sukkah Chazal state, “All Jews are able to sit inside one sukkah.” Similarly, the four species, famously representing Jews of various kinds, all come together as one. Chassidus adds that this is even reflected in the individual minim: The hadas must grow in three-leaf clusters; the lulav leaves must be fused together as one; aravos grow in bunches. In particular, the esrog remains on the tree throughout the four seasons of the year (unlike most other fruits), uniting them all.

But although both mitzvos express the concept of achdus, there is a fundamental distinction between the two.

It is known that the Jewish nation is compared to a single body. This can be viewed in two ways. One is a transcendental perspective from which limbs lose their own identities and are simply defined as part of the person. Another approach is to view ourselves as distinct limbs of one body, where every part has something to offer: the head directs the feet, and the feet bring the head to its destination.

Likewise, there’s a plane on which all Jews are equal. No matter their level of scholarship or observance, the pintele Yid is the same by everyone. Additionally, there is a level where, despite being aware of our unique identities, we still assist and support each other.

These two types of unity are characterized by the sukkah and four minim.

Seforim observe that the numerical value of “schach” (60+20+20) is 100, identical to the number of shofar blasts (60 tekios + 20 shevarim + 20 teruos). This demonstrates that there is a parallel between these two mitzvos.

There’s a well-known parable of the Baal Shem Tov about a prince who wished to implore his father to rescue him from his disgraceful state, but to his dismay was unable to do so, as he’d forgotten the royal language. Instead, he called out, “Oy!” and was thus identified by his voice.

The nimshal is that it happens that a Jew can find himself alienated from the “language” of Torah and mitzvos, rachamana litzlan. When found in such a state, he can ultimately signal his distress through the sound of the shofar, because deep down we all share the same core.

The same idea applies to the sukkah. The sukkah is modeled after the clouds of glory which surrounded the Jewish people in the desert, protecting them as one. “All Jews are able to sit in one sukkah”: a sukkah is an equalizer, a place where we’re all equally present.

The achdus of the four minim, however, is different. We weren’t commanded to take four esrogim or four aravos. We select four distinct species, each with its unique identity, yet they come together as one bundle. This is reminiscent of the second type of achdus, where we join together despite our differences.

It would appear that the model of sukkah is loftier, since it transcends individual definitions and distinctions, as opposed to the four minim which, despite bringing opposites together, never manages to erase the differences.

However, the truth is that you need the unity of the four minim as well. You may love someone because you recognize that you’re only divided by your bodies, but your souls are all united with Hashem. You don’t love your friend as he exists in reality, rather you connect with him on a deeper plane, the plane of his neshamah.

But seeing people for their souls is not sufficient. You need to support your fellow in a realistic, tangible way, and not only spiritually but physically as well. (For example, if you and your colleague are both in business, not only should you not undercut his profession, but you should assist him in his endeavors.)

On the other hand, the unity of the four minim is also not enough. Alone, it can be viewed as a state where you simply help others but aren’t actually united with them. Our point of departure must be the sukkah, where we recognize that we’re all one entity, and then we must reconcile and integrate that view with the everyday reality we live with.

That is the underlying idea behind making the brachah on the four minim in the sukkah: The paradigm of sukkah, where we are all one, enhances the perspective of the four minim, resulting in true and complete love for each other.