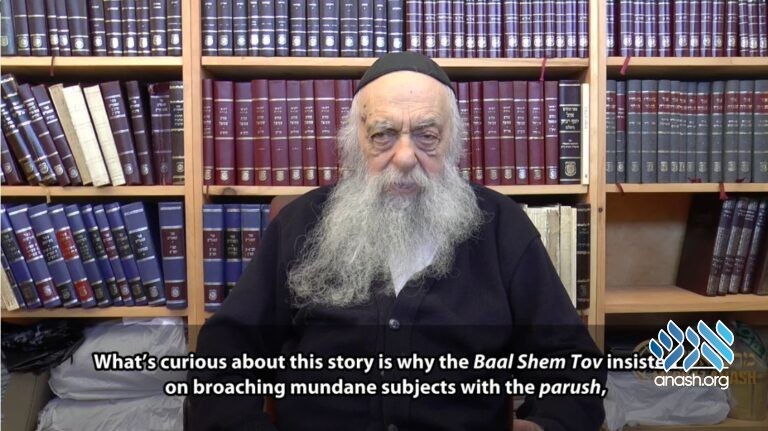 Watch: A short lesson by Reb Yoel Kahn on Parshas Vayeitzei and Tes Kislev with English subtitles and transcript.

Watch a short lesson by Reb Yoel Kahn on Parshas Vayeitzei and Tes Kislev with English subtitles and transcript.

The parshah of Vayeitzei concludes with Yaakov and Lavan making a pact, pledging never to harm each other, and erecting a pile of stones between them. This mound was to serve as a testimonial to their agreement, “Ed hagal hazeh.”

Seforim point to two pesukim which serve as an allusion to Lag Ba’omer, the date of the passing of R. Shimon bar Yochai: “Gal einai v’abitah niflaos mi’torasecha—Open my eyes and I shall gaze upon wonders from Your Torah,” and the above-mentioned pasuk—“Ed hagal hazeh.” Both of these pesukim contain the word “gal,” which is comprised of the letters lamed and gimmel, just like the word “Lag” in Lag Ba’omer.

Now, the link of the first pasuk to R. Shimon bar Yochai is fairly obvious, as he was known for revealing “wonders from Your Torah”—pnimiyus haTorah. However, what relevance does the content of “Ed hagal hazeh” have to Rashbi?

Parshas Vayeitzei is always read on or in proximity to Tes Kislev, the Mitteler Rebbe’s yahrtzeit.

It follows that the above-cited verse (“Ed hagal hazeh”), which is written in Parshas Vayeitzei, is related to the Mitteler Rebbe’s passing as well.

What is the connection between this verse and the subject to which both Rashbi and the Mitteler Rebbe devoted their lives—pnimiyus haTorah?

The Frierdiker Rebbe once related the following story:

The Baal Shem Tov, while still a hidden tzaddik, would visit town after town and seek out the simple folk. He would converse with them, inquiring about the state of their health and livelihood, with the hopes of eliciting a hearty “Baruch Hashem!”

He once entered a beis midrash and encountered a parush (ascetic) engrossed in learning. The Baal Shem Tov approached him and inquired about his health and livelihood, but the parush irately dismissed his question.

“Reb Yid,” said the Baal Shem Tov, “you are depriving Hashem of his parnasah!”

The parush was understandably puzzled. The Baal Shem Tov then proceeded to explain that Hashem is described as “Yoshev tehilos Yisroel—sitting upon the praise of Yisroel,” which the Baal Shem Tov interpreted to mean that Hashem is sustained by our praise and exclamations of “Baruch Hashem.” (In colloquial Yiddish, a person was said to “sit” upon his source of livelihood.) The refusal of the parush to respond in that vein thus served to deprive Hashem of His “livelihood.”

Let’s analyze this story. Seemingly, the Baal Shem Tov could have accomplished his goal far more simply: Instead of broaching mundane subjects with the parush, he could have asked him how his learning was coming along. The parush would then have been far more keen to respond that Baruch Hashem, he had learned many pages of Gemara that day and had produced many chiddushim. Hashem would have received His “tehilos Yisroel,” and everything would have worked out perfectly!

The interaction between the Baal Shem Tov and the parush was actually a confrontation between two worldviews. The parush understood that the only way to come close to Hashem was through studying Gemara. The world stood in the way of this goal, hence the need to abstain from it and be an ascetic. The Baal Shem Tov, on the other hand, established that Hashem can actually be present in our everyday activities.

The former means acting with G-d in mind (“leshem shamayim”), for example, to make money in order to be able to study Torah without distraction. However, there might not be anything refined about how we go about earning that money; it’s done in the same way as, lehavdil, a non-Jew. It is merely a means to an end, the end being to serve Hashem.

The latter, on the other hand, is about connecting with Hashem specifically through our everyday acts—to know Him in “all our ways,” be it eating, drinking, or doing business. For example, when a number of factors work together to allow for a successful business deal, we see the hand of Hashem at play.

By asking people about their health, the Baal Shem Tov wished to emphasize that we should see Hashem’s involvement in our physical wellbeing. The association of our health with Hashem is not just in a way of “leshem shamayim,” that if one is sick, he cannot serve Him properly. Rather, we can “know Hashem” in our health itself. By initiating the response of “Baruch Hashem,” the Baal Shem Tov wanted to call people’s attention to Hashem’s involvement in their health and livelihood.

Parshas Vayeitzei discusses Yaakov’s trip to Charan. This journey has been cast as a metaphor for the soul’s journey into this world. Just as Yaakov left Eretz Yisroel for Charan, where he would need to deal with the devious Lavan, our neshamah descends into “Charan”—this world, which is, like Lavan, a “world of falsehood.”

The crucial question is: How should we relate to the world and the set of challenges that comes along with it?

When in “Charan,” we face two options: to adopt the approach of the parush, or that of the Baal Shem Tov.

We can practice avoidance, viewing gashmiyus as an obstacle, to be used only when absolutely necessary. The parush surely had no choice but to eat occasionally, yet he saw that act as an unfortunate necessity. Of course he made a berachah before eating, but to him that was merely a halachic requirement. To experience a true connection with Hashem, he felt, one must focus on fasting and studying Torah.

Then there is the perspective of the Baal Shem Tov, which is to discover Hashem within our physical lives. For this to be possible, a greater divine power is needed. To see holiness only in the spiritual is to interact with Hashem in a limited fashion. It is only through a far more powerful level of G-dliness that we are able to see Hashem even in the mundane aspects of our lives.

This can help us understand the difference between the revealed and hidden parts of the Torah. The revealed part of Torah demands that we construct (not a pile of stones, but) a wall in the face of “Charan,” barring the ability to engage in gashmiyus. A “gal,” on the other hand, poses a warning but does not prevent passage.

This concept can be found in the verse itself: Yaakov and Lavan’s pact stipulated that they could not pass the stones with the intent to harm the other, but (as Rashi explains) they were explicitly permitted to cross over to each other’s realm for the purpose of commerce.

What does this represent? The “barrier” of stones is there to remind us to be cautious, so that gashmiyus will not cause us to fall. However, the very fact that it is merely a pile of stones and nothing more beckons us to pass the border for the purpose of spiritual “commerce.” This means that we must mine gashmiyus for the sparks of holiness buried within, which are even higher than the sparks found in spirituality.

In order to find a connection to Hashem within gashmiyus, a higher level is necessary—the power of pnimiyus haTorah.

This is reflected in the two pesukim we began with: “Gal einai v’abitah niflaos mi’torasecha”—when Torah’s wondrous inner dimension is revealed, it is not a wall that divides us from the physical, but a gal, a pile of stones (“Ed hagal hazeh”). This demarcation reminds us not to slip, but encourages us at the same time to forge ahead and reveal Hashem within the physical aspects of our lives.

Thus, the pile of stones aptly captures the essence of what Rashbi and the Mitteler Rebbe represent—pnimiyus haTorah and Chassidus.