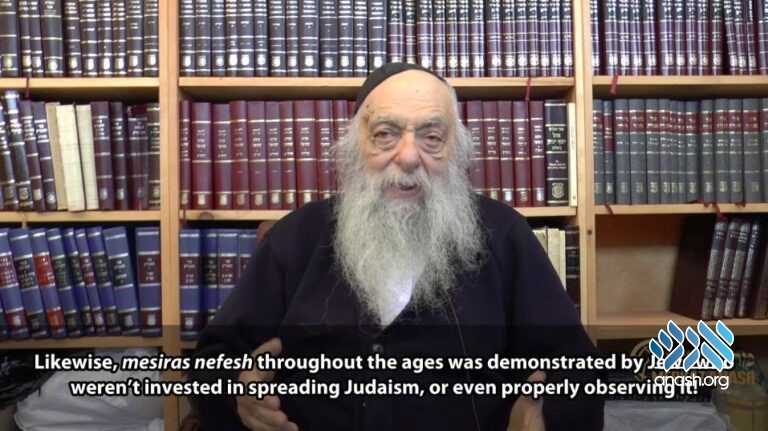 Watch: A short lesson by Reb Yoel Kahn on Parshas Vayeira with English subtitles and transcript.

Watch a short lesson by Reb Yoel Kahn on Parshas Vayeira with English subtitles and transcript.

The climax of this week’s parshah is the akeidah, in which Avraham Avinu is ready to sacrifice his only son to Hashem. This is an episode which features heavily throughout our tefillos, underscoring how central and significant it is.

However, it is hard to understand the singularity of Avraham’s act. The mesiras nefesh Avraham displayed was replicated countless times over through the ages by Jews who were certainly not on the level of Avraham Avinu. What’s more, unlike Avraham, these individuals never received a personal order from Hashem to do so. Why the great fuss over the akeidah?

The answer generally given is that Avraham “opened the pipeline.” Being the first to have mesiras nefesh for Hashem enabled everyone who followed to do the same. But a question still remains: Why does this whole incident receive more attention than, say, Avraham’s being cast into the flames at Ur Kasdim, which was also an act of mesiras nefesh?

We must conclude that the mesiras nefesh of the akeidah surpassed Avraham’s previous accomplishments. Moreover, the Midrash states that Hashem informed Avraham that were he to fail this final test, all his previous trials would be rendered worthless. Clearly, the akeidah didn’t merely eclipse Avraham’s prior sacrifices, but served as the definitive barometer of whether he had mesiras nefesh at all. Why was this the case?

To explain this, we must preface one final question: Chassidus links being moser nefesh to the level of the soul known as yechidah, an element which gentiles are lacking. Yet, there are copious instances in which non-Jews willingly gave their lives for what they believed, however false that ideal or belief may have been!

It’s true that they may have sacrificed their lives, but this falls short of what mesiras nefesh is really all about.

The true definition of mesiras nefesh isn’t merely disregard for one’s own life, but rather committing the ultimate act of self-nullification. Take, for example, a case of an individual who puts his life on the line for the very selfish purpose of making headlines and becoming famous. He may have sacrificed his life, but he surely has not nullified himself.

Let’s examine a higher level: A person who has lived his entire life based on a certain belief is told to act in a way that conflicts with it (say, to laugh at his belief in public). He stands his ground on the pain of death, due to the sense of being unable to survive in a way that is at odds with something so central to his life. Although he has sacrificed his life for his faith, it is not a true act of self-nullification, because his motive is that he will be unable to live without it.

Or take an even more subtle example: An individual has advocated a particular position his entire life, or has even founded a certain belief system. When forced to belittle his ideals, he feels compelled to die for it, or else his perceived hypocrisy will undermine his entire life’s work. “What will people say?” he tells himself. “That when it comes to saving his skin, he is ready to throw it all away? That will surely lead them to conclude that my approach is false! I must do whatever it takes to prevent that, even at the expense of my life!”

Although this person may possess ironclad conviction for his faith, he, too, is not truly acting selflessly. What he is really doing is operating on the basis of a particular self-serving, albeit altruistic, agenda.

Jewish mesiras nefesh, on the other hand, means to sacrifice one’s life not because something will be gained from it, but solely for Hashem. This is only possible because we have a neshamah which instinctively connects with Hashem, which other nations lack.

Tanya explains that a soul is likened to a flame which longs to detach itself from its wick in order to reunite with its source, whereupon it ceases to exist. Typically, a person wishes to expand, to acquire more, never less. Yet, a fire’s sole desire is to reconnect with its source, regardless of the consequences. Likewise, the Jewish soul reflexively cleaves to its Creator, not because something will be gained from this, but rather because it wishes to connect to its source.

This selflessness was not on display at Ur Kasdim, since Avraham’s work would be ruined were he not to demonstrate the willingness to die in support of his lifelong campaign. The fact that he had this incentive to bolster his legacy therefore undermines any attempt to discern authentic mesiras nefesh in his previous actions.

Only the akeidah can be deemed true mesiras nefesh by this standard. He stood to impress no one by doing this—the event took place in total isolation. In fact, the act of sacrificing his sole successor Yitzchak would serve as the death sentence of everything he had worked for! The choice to conduct the akeidah could only emanate specifically from selflessly heeding Hashem’s command, not because something will be gained, but only because this is His will.

Likewise, mesiras nefesh throughout the ages was demonstrated by Jews who weren’t invested in spreading Judaism, or even properly observing it! Yet they acted against their own interests simply because their neshamah acted like fire—gravitating towards its source, even at its own expense. We therefore mention the akeidah often, not only to evoke the merit of something our ancestor once did, but to evoke our own merit and demonstrate the uniqueness of a Jew.

The Shulchan Aruch states that we one of the reasons we recite the akeidah daily is to remind us that we must overcome our natural inclinations, just as Yitzchak sacrificed his life for Hashem. But how is it possible to compare what is sometimes merely an inconsequential struggle to an accomplishment as mighty as the akeidah?

The answer is that mesiras nefesh isn’t measured by its scale but by its essential quality. We ordinarily act solely in our own self-interest, be it on a basic level or because this is what we believe, think, or feel, and we cannot be moved to do even the slightest action which doesn’t fit that bill. To spend even a single minute on something for no purpose other than for Hashem is therefore reminiscent of the akeidah.

I once heard someone relate that he was present at a farbrengen (prior to the Frierdiker Rebbe’s passing) where the Rebbe used the following parable: A king once arrived in a foreign place, and requested lodgings, no matter how sparse, on one condition: That the place be uniquely his, that he not feel like a guest, but rather be allowed to feel entirely in possession of this space.

This parallels the concept of the akeidah, which calls for creating a space for Hashem completely devoid of self. It was Avraham who made this possible for all of us, empowering us to ignore ourselves, be it even for just a few moments, and do something not because we will uphold a certain cause or belief, but only because this is what Hashem commanded.