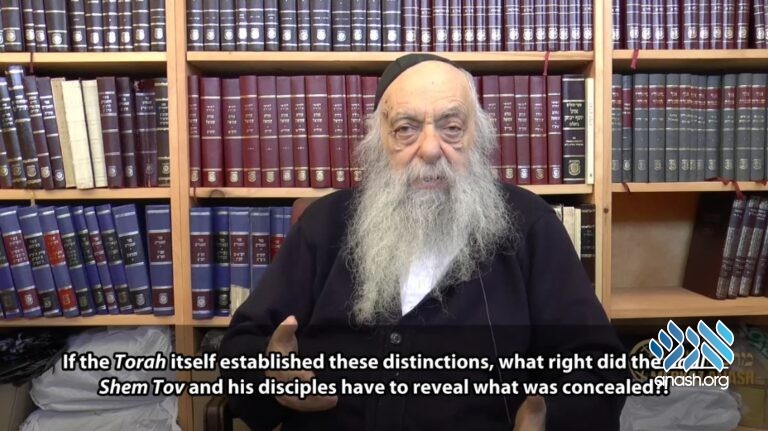 Watch: A short lesson by Reb Yoel Kahn on Parshas Toldos with English subtitles and transcript.

Watch a short lesson by Reb Yoel Kahn on Parshas Toldos with English subtitles and transcript.

This seemingly redundant statement is explained by Rashi to allude to the fact that there were those scoffers who claimed that Yitzchak’s real father was Avimelech, king of Pelishtim, and not Avraham. Hashem consequently responded by reshaping Yitzchak’s face to resemble Avraham’s, thus attesting to the fact that “Avraham fathered Yitzchak.”

The implication of this Rashi is that Yitzchak had initially not been born in Avraham’s likeness. In fact, the Gemara states that Hashem “changed over” Yitzchak’s face, suggesting that not only did he not look like Avraham, but his visage was actually the opposite of his father’s. This is surprising, in view of the fact that children typically bear resemblance to their parents. Yet we’re told that if not for Hashem’s extraordinary intervention, Yitzchak’s appearance would have borne no similarity to his father’s!

This question is all that stronger when we consider the personalities of Avraham and Yitzchak. Ordinarily, a person’s soul and body diverge, and the body does not necessarily reflect the soul. But the loftier and more refined one is, the more in sync his physique is with his spiritual side. With the Avos, it is sure that their bodies clearly reflected their spiritual character. Since Avraham and Yitzchak were equal in that they were both saintly individuals, how is it that their physical appearances weren’t naturally alike?

In fact, it is specifically because the bodies of the Avos reflected their inner side that they took on such variant physical appearances. The Avos excelled in distinct modes of avodah: Avraham in chesed and love of Hashem, and Yitzchak in gevurah and fear of Hashem. While both approaches in serving Hashem are correct and holy, they are distinct, and can even be deemed opposites.

In fact, it can be argued that Yishmael was more identical to Avraham in overall temperament than Yitzchak, as he represented chesed as well, albeit chesed of kelipah. Similarly, Esav was closer to Yitzchak in nature than Yaakov. So in view of the fact that the Avos were inherently quite different, and considering that their bodies were secondary to their souls, the natural outcome was that they were visually dissimilar as well.

Chesed is likened to water. Just as water flows downwards, chesed reaches out to those found in a lower state and offers them assistance. Gevurah, on the other hand, is compared to fire. Just as fire rises above, gevurah seeks to detach from what is below and rise higher. Thus, these two midos are, at their core, completely at odds.

It is known that the Avos were a merkavah to Elokus. The supernal merkavah consists of four “faces,” and from these four, one face was turned to the right, representing chesed, while a second face was turned to the left, representing gevurah. This emphasizes the great contrast between them. Indeed, this contrast is even more profound than the difference between fire and water: the latter are merely two physical entities with differing characteristics, while the two supernal “faces” symbolize two entirely different approaches.

This all serves to enhance our appreciation for the significance of Hashem’s act in response to the scoffers. Since there were those who said that Yitzchak was the son of Avimelech, Hashem changed Yitzchak’s appearance from what it should have been. This was not only a miraculous feat on a physical level, but also entailed altering the way he should have appeared as a reflection of the supernal merkavah!

Parshas Toldos is always read in conjunction with the month of Kislev. This month is associated with the revelation of the inner dimension of Torah (as demonstrated by the various dates commemorated during Kislev, such as Yud-Tes Kislev and Yud Kislev). Accordingly, the change in Yitzchak’s appearance mentioned in this parshah sheds light on the theme of this month.

This raises the question: The distinction between these two parts is not superficial; it was established by the Torah itself. That being the case, what right did the Baal Shem Tov and his disciples have to reveal what was until then concealed?! Certainly they were acting with Hashem’s consent, and even on his command. But what indeed called for such a fundamental change?

Parshas Toldos can provide us with the answer to this question. Yitzchak’s different appearance was not merely a physical feature, rather it represented the supernal merkavah. Yet, Hashem was ready to change that, just to counter the scoffers who claimed that Yitzchak’s father was not Avraham but Avimelech. To accomplish this, it was specifically Yitzchak, gevurah, that was altered to match Avraham, chesed (although technically Hashem could have changed Avraham’s face to match Yitzchak’s).

The same is true here. The hidden part of Torah is indeed inherently concealed, as its very name indicates. Yet, when the identity of a Jewish child is at stake—when the “scoffers” seek to sever his connection to Avraham and Yiddishkeit—Hashem instructs to make gevurah appear like chesed, and reveal that which is typically concealed. Hashem is willing to alter deeply embedded rules, just so that a Jewish child should be unmistakably connected to his source!