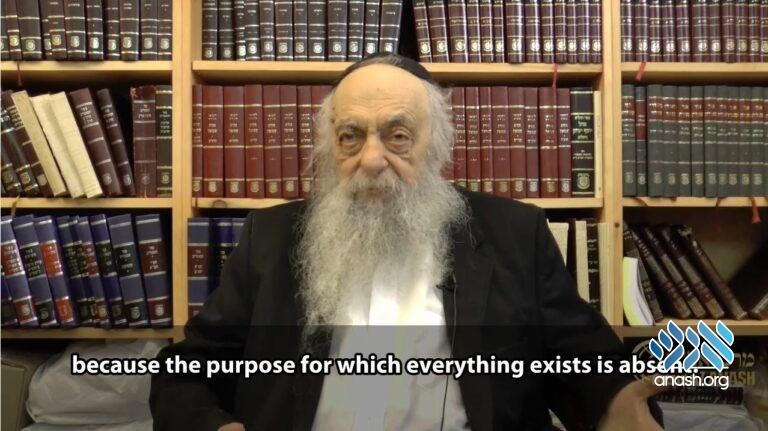 Watch: A short lesson by Reb Yoel Kahn on Parshas Shoftim with English subtitles and transcript.

Watch a short lesson by Reb Yoel Kahn on Parshas Shoftim with English subtitles and transcript.

Parshas Shoftim features the well-known pasuk which states: “Ki ha’adam eitz hasadeh,” man is like a tree of the field.

The Gemara cites this pasuk and asks: Is man truly like a tree?! The Gemara answers: A tree bearing fruit may not be destroyed, as opposed to a barren tree which is not afforded that protection. Similarly, an upright talmid chacham who “bears fruit” is to be commended, while one who does not, is not.

What exactly is the Gemara’s question? If the question is simply how can a man be compared to a tree, there are many comparisons given. For example, the Mishnah states in Pirkei Avos that a tree’s branches are a metaphor for man’s wisdom, and its roots—for his deeds. What is the difficulty?

We must say that the Gemara understands the pasuk to mean (not just that man is compared to a tree, but) that man is somehow literally like a tree. If this is the case, then what is gained in the Gemara’s answer? The Gemara merely seems to be giving another analogy between a human and a tree! And moreover, the metaphor the Gemara gives is limited in scope, appearing to be applicable only to a talmid chacham!

We must say that this comparison is not just another metaphor, but indeed explains how an adam is actually eitz hasadeh.

The “Tree” Within Man

There are four Hebrew terms which are used to refer to man: Adam, ish, gever and enosh. It is explained that adam is the highest ranking title, representing sechel, the intellect, while ish is in reference to midos, the emotions.

Now, man is a microcosm of the world. Just as the world as a whole is comprised of four levels, domem, tzomeiach, chai and medaber (inanimate matter, vegetation, animals and humans), all these four levels are also contained within man. Tzomeiach is ish, the midos whose nature is to grow, while the medaber is adam, the human mind.

Which aspect of man is the greatest? The obvious answer would appear to be sechel, since that is our advantage over animals, unlike midos, which they possess as well. Although our midos may be of a higher quality, it is ultimately the animal (or tzomeiach) within us, as opposed to sechel, the medaber within us.

We can now understand the Gemara’s question. The pasuk says that adam is eitz hasadeh, which seems to indicate that man’s unique characteristic is emotion. This is difficult to understand: Isn’t intellect his distinctive feature?

The Purpose of Intellect

The Gemara replies that yes, an adam is eitz hasadeh. Sechel alone has no value; its entire purpose is to lead to midos and result in actual change.

The Gemara brings out this point by indicating the difference between fruit-bearing trees, which may not be cut, and barren trees, which may. This demonstrates that although a tree is comprised of many components—roots, branches, leaves, fruits—the purpose of the tree is to produce fruit, and all its parts serve that goal. If everything else is present but there are no fruits, then the tree has no worth and may be destroyed.

The Gemara continues that the same is true with man. When does a talmid chacham have significance (as well as anyone who studies Torah, each on his level)? If his intellectual pursuits lead him to be of upright character and “bear fruit”—mitzvos. “Ki ha’adam eitz hasadeh,” it is indeed the midos that make a human.

The Gemara’s question carries yet a deeper dimension.

Just as a human is comprised of the four levels of domem, tzomeiach, chai and medaber, sechel itself, being the essence of man, is a microcosm within man, and therefore all these four levels exist within it as well. Thus there is the lower sechel as it relates to practical behavior (for example, the study of Kitzur Shulchan Aruch, so one will know how to act), and there is the medaber within medaber, sechel in its purest form, wholly beyond midos (for example, the study of the theoretical discussions of the Gemara—lomdus). This is the true level of adam.

The Gemara’s question, then, is: Even if we will say that the objective is midos and actual conduct, and even intellect serves that goal, it would appear that only the lower level of sechel, ish, should be used to that end. But the pasuk says that even adam­ is eitz hasadeh. Wouldn’t it suffice to use the lower level of sechel, ish, for midos? Why use even adam, the deeper and higher levels of intellect?

The answer is that yes, the purpose of these higher levels is to affect one’s emotions and conduct.

This idea as well can be seen with a tree. While the fruits grow from the branch, this is only possible because of the power of the roots, the tree’s essence, which is present in the branch. Similarly, while the emotions certainly emanate most immediately from the intellect of ish, it is adam, unadulterated intellect, that enables ish to effect the emotions. What’s more, that is precisely the purpose and shleimus of adam; the entire purpose of man’s innermost sechel is to lead to midos and bring about a change in one’s behavior.

The same applies to nigleh versus pnimiyus hatorah. Nigleh appears to have a more immediate, stronger effect on a person; however, it is also a lower level, as it is more accessible and easily grasped. Take the sugya of shnayim ochazin betalis—two people disputing over a found garment: although the sugya includes much lomdus, since the object under discussion is relatable (a physical garment), it is easier to grasp. Pnimiyus hatorah, on the other hand, while made somewhat understandable by means of analogies and explanations, is mostly beyond our comprehension.

A person may think that pnimiyus hatorah is too sublime to be used to better our character traits. Wouldn’t it be enough to employ something more directly relatable, like nigleh (similar to fruits, which grow from the branches)?

However, the truth is that Torah contains both ohr and maor, light and the source of light, and the maor—pnimiyus hatorah—must be utilized for midos as well.

Chassidus for the Weak Hearted

Based on this, we can explain another part of the Gemara quoted above. The Gemara relates that Rebbi Yirmiyah asked Rebbi Zeira to repeat a teaching, but Rebbi Zeira replied that he was unable to, because his “heart was weak.” “If so,” continued Rebbi Yirmiyah, “at least repeat an agadah, a homiletic teaching.” Rebbi Zeira acquiesced, whereupon he repeated the statement cited above on the verse “Ki ha’adam eitz hasadeh.”

The simple meaning would appear to be that Rebbi Zeira didn’t have the strength to discuss a halachic topic, while agadah is a lighter subject which he was able to relate even while fatigued. Yet the truth is that agadah contains deeper lomdus than halachah; in fact, the Alter Rebbe states that most of Torah’s secrets are embedded in agadah.

What Rebbi Zeira meant when he said he had a “weak heart” was that he felt his midos weren’t on par with the level expected of him. Therefore, he didn’t find it appropriate to engage in a halachic discussion. Since the whole purpose of sechel is to lead to proper midos, what was the point of engaging in intellectual discussion if his “heart” was “weak,” his emotions were lacking?

“If so,” said Rebbi Yirmiyah, “repeat an agadah. Say a teaching of pnimiyus hatorah; if the ohr of Torah will not do the job, the maor will produce the desired results.”

When Rebbi Zeira heard this, he agreed wholeheartedly. “You are right,” he said. “Ki ha’adam eitz hasadeh; even the deepest levels of intellect, adam, must be harnessed for midos. What’s more, that is its entire purpose, to make a person become an upright talmid chacham who produces good fruits.”