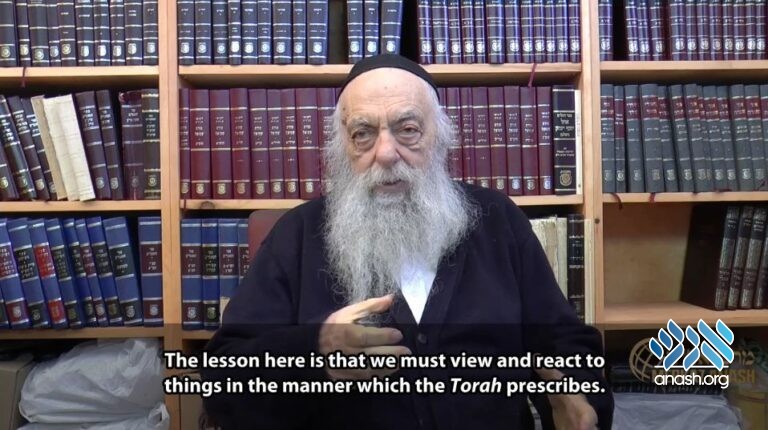 Watch: A short lesson by Reb Yoel Kahn on Parshas Noach with English subtitles and transcript.

Watch a short lesson by Reb Yoel Kahn on Parshas Noach with English subtitles and transcript.

Parshas Noach contains lessons on the themes of both improper sights and improper speech. When Shem and Yefes learned that their father was exposed, they endeavored to cover him while facing backwards, to avoid seeing his nakedness. And, earlier in the parshah, tamei animals are euphemistically referred to using the lengthy term “not tehorah” instead of simply “temei’ah,” which the Gemara understands as a lesson in proper speech.

However, this last point requires clarification. When discussing the laws of kashrus in Parshas Shemini, the Torah consistently refers to animals as tamei, instead of the more indirect “not tahor.” Why is this so?

The solution lies in the context where these terms are used. In Parshas Noach, which is relating a story, the Torah opts for the more ambiguous terminology. But Parshas Shemini is teaching us halachos. Unlike a story, halachah must be dictated in unmistakably clear language, hence the direct reference to tamei animals.

One way of understanding this answer is that concerns regarding halachic clarity override the problem with unclean speech. However, this is not the case. Although with a story such wording is inappropriate, when used in a halachic context, this very same wording becomes proper and clean. It is not something negative, rather it is part of the halachah being stated.

This idea can be further extended to the lesson regarding improper sights learned from Shem and Yefes.

When encountering a disgraceful phenomenon, one may react in one of two ways. One possible reaction is to create an uproar: how could it be that such a terrible thing occurred?! But another way is to view it through the lens of halachah, which is the Torah’s perspective on what must be done. When viewed in such a fashion, the focus is not on the negativity of the event, but on how it can be rectified. When seen in a “halachic” context, the very same sight becomes proper and clean.

The Mishnah in Maseches Nega’im states: “כל הנגעים אדם רואה, חוץ מנגעי עצמו – One may view any [skin] malady [to determine whether it is tzara’as], other than his own.” The Baal Shem Tov reinterpreted this statement as follows (pausing after the word חוץ instead of after רואה): “כל הנגעים אדם רואה חוץ, מנגעי עצמו – Any [spiritual] malady which one views in others, comes from his own.”

In other words, due to our inability at times to recognize our own failings, Hashem causes us to notice those very failings in others. The other person serves as a “mirror,” helping us realize and contemplate on our own shortcomings.

Let’s analyze this teaching. Who says the reason I noticed another’s shortcomings is because I have the same? Isn’t it possible that Hashem led me to witness the other’s iniquity for another reason altogether—so that I can fulfill the mitzvah of tochachah, to speak to him about the problem and help him fix it?

What Do You See?

The answer lies in how the issue is viewed by the onlooker. The “halachah” response to troubling behavior is to focus on the solution, without getting caught up in the outrage. When seen in such a way it is a “proper sight” from the very start, and the reason he was led to notice it was indeed to help rectify it. He will surely reprimand his friend according to the Torah’s guidelines—quietly, discreetly, and lovingly.

But what if that isn’t the case, and he views the issue in a negative manner? This is a sure sign that what he is seeing is simply a reflection of his own equally questionable behavior. (In this vein, the Frierdiker Rebbe once said that when cleaning a precious object, one doesn’t exult in finding more dirt, but rather in rendering it pristine. Likewise, the excitement in tackling a problem cannot arise from discovering it, but from successfully resolving it.)

The lesson from this is that we must view and react to things in the manner which the Torah prescribes. Usually an issue must be dealt with by speaking to the other in private; at times, a more vocal reaction is warranted. But either way, we must process what we experience purely through the prism of halachah—asking ourselves what must be done, without seeing it as something improper.