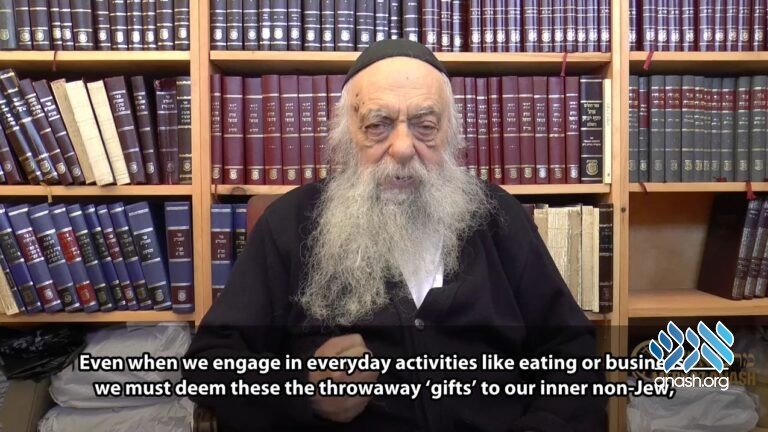 The name of a parshah is not just a word selected from the parshah’s opening verses. Rather, it encapsulates the entirety of that particular parshah’s content.

With Parshas Chayei Sarah, however, it is difficult to understand how this is the case.

Parshas Chayei Sarah discusses three main concepts: Avraham purchasing the cave of machpelah from Efron; Eliezer’s journey to Charan to seek a wife for Yitzchak; and Avraham’s marriage to Keturah (identified as Hagar) and his children from her.

However, the name of the parshah—Chayei Sarah, “the life of Sarah”—seems to share no common theme with these three components! In fact, the opposite appears to be true, as each of these three events could only take place after Sarah’s passing:

The cave was purchased precisely because Sarah had passed away, to serve as her burial spot. Similarly, it was the akeidah, which is what triggered Sarah’s death, that gave Avraham the impetus to marry off Yitzchak (as Rashi explains). In the same vein, it’s unlikely that Avraham would have married Hagar if Sarah would still be alive, as she had demanded that Hagar be banished.

How then can we say that the name “Chayei Sarah” reflects the content of the parshah?

The answer to this question can be understood by analyzing the true meaning of life.

Let’s say there’s an individual who leads a movement, influencing his biological children, as well as his students (who are also called “children”). As long as he is alive, no matter how influential he is, it’s difficult to gauge his true impact. Perhaps his students follow in his ways only because he is actively leading them. Only upon his death, when his legacy endures and leaves an eternal mark, can he truly be said to be “alive.” This is even more so when not only does his legacy endure, but it actually flourishes more than before.

Let’s apply this concept to the life of Sarah.

Avraham spread G-dliness to everyone, including those Arabs who bowed to the dust on their feet. Despite the greatness of this achievement, it was accompanied with a certain disadvantage: he didn’t focus on differentiating between Jew and gentile. After all, he was called Avraham because he was a “father to a multitude of nations.”

Sarah, on the other hand, had a different perspective. True, it is important to spread G‑dliness to all, but one must also make distinctions where necessary. “Yishmael will not inherit together with my son Yitzchak,” she demanded.

This isn’t to weigh one’s greatness versus the other’s; rather, Avraham and Sarah were each entrusted with a different mission and task. Although Hashem told Avraham to heed Sarah’s advice because her prophecy was higher, being a greater prophet doesn’t necessarily mean being of greater stature.

Sefarim explain that it’s possible to have a greater tzaddik who lacks ruach hakodesh, and a lesser tzaddik who possesses it. The reason is because ruach hakodesh doesn’t depend on a tzaddik’s level, but rather to what degree he is involved with the world. A tzaddik who was given the task of dealing with worldly matters may be granted ruach hakodesh, while one who is completely separate from earthly endeavors may not need it.

Avraham was removed from the world in a sense, and he therefore didn’t discern between Yitzchak and Yishmael. In fact, he was bothered by the thought of expelling his older son. This discernment was a task that was given to Sarah, and furthermore—she influenced Avraham to act accordingly, and to send away Yishmael despite Avraham’s misgivings.

It was this aspect of Sarah, to influence Avraham to adopt her perspective, that became even more apparent after she passed away. Thus, it was this era that became the true “life of Sarah.”

We see this with all three incidents related in the parshah.

By performing the act of milah, Avraham only impacted himself and his household. Additionally, it only affected his body. Acquiring the cave of machpelah, on the other hand, established that Jews are the focal point of the entire world. This is not limited to a Jew’s body, but extends even to the land itself.

Furthermore, Eliezer was interested in suggesting his own daughter for Yitzchak. Although Eliezer had a distinguished role in spreading Avraham’s teachings, Avraham refused. Not only was Eliezer less important than Yitzchak, he was deemed “accursed” compared to him. What’s more, Eliezer himself ultimately recognized this, and actively looked for ways to find the right wife for Yitzchak.

All of this underscores how a Jew must recognize himself as belonging to the chosen nation. A Jew is the focal point of humanity, and even of the world itself. Even the most spiritually advanced non-Jew (like Eliezer) does not have the holiness that a Jew has; and he can only access those levels by offering the Jew a supporting hand.

We must similarly apply this perspective to the Jew and gentile within us—the G-dly and animal souls. Even when we engage in everyday activities like eating or business, we must deem these the throwaway “gifts” to our inner non-Jew, and give “everything we possess” to “Yitzchak,” our spiritual pursuits. Mundane matters might be proportionally greater in number than the time we spend davening and learning, just as the sons of Keturah outnumbered Yitzchak; yet, it was Yitzchak who was Avraham’s only rightful heir.