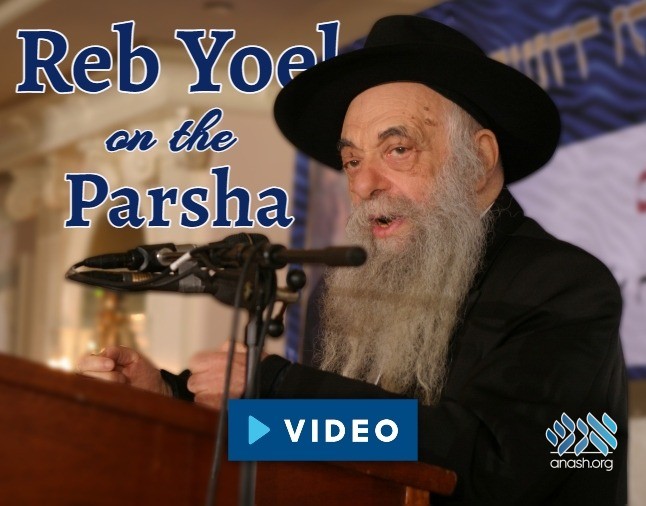 Watch: A short lesson by Reb Yoel Kahn on Parshas Bo with English subtitles and transcript.

Watch a short lesson by Reb Yoel Kahn on Parshas Bo with English subtitles and transcript.

In this week’s parshah Hashem relays the mitzvah of sanctifying the new moon, derived from the possuk, “החדש הזה לכם ראש חדשים”. This mitzvah is very special; in fact, it would have been logical for the Torah to begin with it, because it is “the first mitzvah with which the Jews were commanded” (as Rashi says in his first comment to chumash).

What, indeed, is so unique about this mitzvah?

Let’s first analyze the above-mentioned Rashi. Rashi asks, “Why does the Torah begin with Bereishis and not with Hachodesh hazeh lachem, the first mitzvah with which the Jews were commanded?” He answers that the story of the world’s creation provides an answer to those who claim that we did not have the right to conquer Eretz Yisrael.

Did Rashi really entertain the notion that the Torah should not relate how Hashem created the world? As the Ramban asks, this is a basic tenet of our faith! Moreover (as other commentators ask), Sefer Bereishis includes a number of mitzvos that are not mentioned later. How could they be omitted?!

The same can be asked regarding the stories of Sefer Bereishis. Every story in the Torah contains lessons in our avodas Hashem. Of course they must be recorded! And if Rashi’s question did not take these lessons into consideration, it can be asked about the stories following Hachodesh hazeh lachem as well!

The World and Beyond

The commentators explain that Rashi did not mean to ask that these concepts should not have been recorded at all. They could have been transmitted as oral traditions or transcribed in some other format. The question is, Why are they included in the Torah? To be part of Torah is another story altogether.

These ideas, although important, are elements relating to the world itself. They can be compared to the sheva mitzvos bnei noach. Hashem created the universe so we can make a dirah lo yisbarech betachtonim; however, before drawing down the shechinah, we must make sure there is a world that runs properly. This is the primary objective of these mitzvos, to ensure that society continues to exist in a humane fashion, without murder, thievery, and incest. Even the prohibition against serving avodah zarah is meant to guarantee an awareness of a Supernal Being, to prevent one from “swallowing his fellow alive.”

The task of the Jewish nation through the Torah, however, is to draw down what is beyond the world. We must create a dirah lo yisbarech by bringing a higher, transcendent level of Elokus into the world.

The universe is divided into numerous sectors. There are the four categories of domem, tzomei’ach, chai, and medaber, and within medaber itself there are many groups: the children of Cham are inferior to the children of Shem; within the descendants of Shem themselves, certain nations have unique laws, such as Amon and Moav, who descend from  Lot; and even from among Avraham’s progeny, the children of Keturah are not Jewish, yet they are obligated to circumcise themselves (according to the Rambam). However, all these diverse categories fall within the realm of Creation. Yidden, by contrast, belong to a category of their own.

We know that in addition to the four categories of domem, tzomei’ach, chai, and medaber, there is a fifth category—Yidden. So why don’t we say that there are five categories to begin with? Because Yidden aren’t a fifth category of Creation; they are something altogether different—a portion of Hashem Above.

This, then, is Rashi’s question. All the commandments and (lessons derived from the) stories in Torah are of the type that elevate Yidden to a level that is beyond Creation. This accomplishment began through (Mattan Torah, which was preceded by) Yetzi’as Mitzrayim; hence, the Torah should have started with the mitzvah of Hachodesh hazeh lachem, conveyed just before this redemption.

To quote Rashi, “this is the first mitzvah with which the Jews were commanded”; i.e., it was the first mitzvah they were instructed as the Jewish nation, one that was singled out from the rest. It’s true that Avraham was given the mitzvah of milah beforehand, but perhaps it was not geared at his uniqueness as a Jew, and thus the children of Keturah are included as well.

Of course it is important to know and study the mitzvos and concepts mentioned in Sefer Bereishis. However, these ideas do not express the true accomplishment of Torah, that it elevates Yidden to a level that is beyond Creation.

In actuality, the Torah began with Bereishis, to demonstrate that the world belongs to Hashem and he gave the land to each nation as he saw fit. However, the fact remains that Hachodesh hazeh lachem was the first mitzvah to be given to the Jews as an exclusive existence.

What is so special about the mitzvah of sanctifying the new moon and calculating the months of the Jewish calendar? We must say that this concept encapsulates the novelty of Yidden and Torah and how they are beyond Creation.

One of the examples that express the uniqueness of Torah is based on a fascinating Yerushalmi (quoted in the Shach to Yoreh Dei’ah):

When a girl turns three years of age, certain changes occur in her body (with regard to her besulim). Let’s assume a girl has just turned three when the Beis Din, seeing that it is still winter and Pesach will not occur in the spring, decided to add a month to the year, creating a leap year. What will happen to the girl in such a case?

Says the Yerushalmi: Even if three complete calendar years have passed since the girl’s birth, the above changes will not take place, since the Beis Din added a month and extended the year!

This is the accomplishment of Mattan Torah. Torah is higher than the world, and its decision to lengthen the year transforms reality.

The world is defined by (space and) time. Yet, in this case, in order to determine when three years have passed, we do not look at the orbits of the sun and moon. The physical ramifications of three years’ end are determined based on what Torah says on the matter!

This is how the mitzvah to calculate the months of the year (which includes adding a month when necessary) demonstrates the uniqueness and superiority of the Torah, making it fitting to be “the first mitzvah with which the Jews were commanded.”