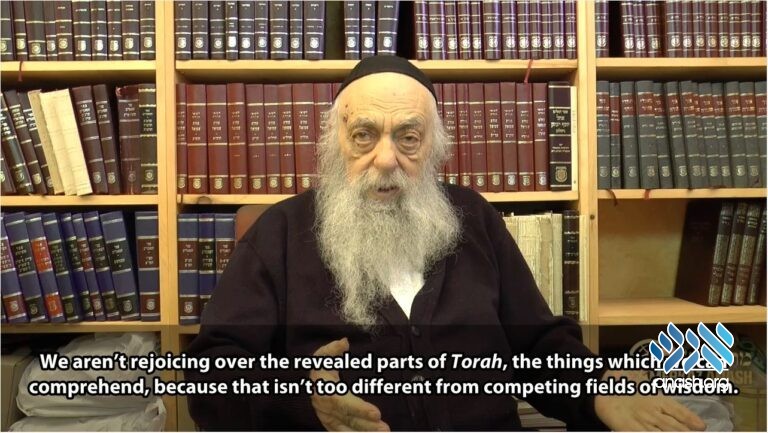 Watch: A short lesson by Reb Yoel Kahn on Parshas Bereishis with English subtitles and transcript.

Watch a short lesson by Reb Yoel Kahn on Parshas Bereishis with English subtitles and transcript.

Simchas Torah is the day when we rejoice with the Torah.

Since Torah is all about studying, the obvious method for achieving this joy would seemingly be to take a particularly geshmake sugya or maamar and sit down and learn it. The intellectual stimulation of such deep and intricate Torah topics would certainly bring us great pleasure and joy.

However, we do no such thing. First of all, although the main focus of Torah study is in Torah Shebaal Peh, we don’t take a Gemara or a maamar. Instead, we opt to take out a Sefer Torah, Torah Shebichsav. Moreover, even the Sefer Torah is not taken out to study. It remains unopened, wrapped in its sash and mantle, and we dance with it.

What is the reason for this?

Immediately following Simchas Torah (on that day itself and the next Shabbos), we begin reading Parshas Bereishis. The mefarshim note that the Torah begins with a beis and not an aleph, and they offer various explanations.

The Gemara relates that King Ptolemy wished to have the Torah translated into Greek. He therefore summoned seventy Jewish sages and isolated each one to prevent collaboration, with the aim of ensuring an honest translation. Yet, Heaven intervened, and they all made identical changes where necessary. One of these changes was that they translated the words “Bereishis bara Elokim” as if the verse would have stated “Elokim bara bereishis,” to prevent the mistaken impression that bereishis was an entity which had created Elokim.

Another noteworthy byproduct of this change, though, is that per this translation, the Torah indeed starts with an aleph! This was not the sages’ objective; their goal was to avoid an erroneous interpretation. However, every detail in Torah is precise, and there is certainly a lesson we can learn from this.

The Aleph Within the Beis

Why indeed does the Torah begin with a beis? One of the main reasons is as follows:

The Torah is Hashem’s supernal wisdom, united with Him and utterly beyond the realm of our understanding. Yet, Hashem wondrously proceeded to transform this lofty wisdom into something even we can comprehend.

Thus, whatever we learn is inherently “beis,” step number two. When a Jew studies Torah, he knows that what he is learning is a secondary version of the Torah. The “aleph” and primary dimension of Torah is the way it exists Above, utterly beyond human comprehension. At the same time, however, the aleph is vested within the beis, in the Torah as we know it.

The concept of tzimtzum, narrowing something down to make it palatable, can take two forms. Let’s take a teacher who wishes to convey an idea that is beyond the student’s academic skills. One method is to transmit a small bit of the concept, to the exclusion of the loftier parts. Alternatively, the teacher can compress the entire depth into a simple analogy or explanation. While being delivered in a relatable way, it is designed to still retain its sublime components.

If the Torah would have been given to us in the first fashion, detached from its Heavenly source, it wouldn’t be beis. What we would have would be everything there is to it, with nothing more. It is only because our Torah includes within it the Torah as it is Above that it can be described as step number two.

On the one hand, the inner depth is beyond our grasp, and we won’t truly fathom it until Moshiach comes. At the same, however, it is there within the Torah we study. What we have is thus the beis, a secondary layer that contains the aleph, the Torah as Hashem’s essential wisdom.

This idea is the theme of the berachos recited before studying Torah.

Quoting the possuk, “Why was the land destroyed? Because they abandoned My Torah,” the Gemara explains that while the Jews at the time of the churban studied Torah, they neglected to say a berachah prior to learning.

Why is this considered as having abandoned the Torah?

The answer lies in the words “My Torah.” The problem was that they regarded the Torah as any other subject, as if it was aleph, with nothing existing beyond it. They failed to realize that the Torah is Hashem’s Torah, that it is the beis within which is found the aleph.

This is the objective of birchos hatorah, to acknowledge and sense that Torah is G-dly. Of course, simply making the blessings and proclaiming that Torah is holy doesn’t suffice either; this must be followed by actual study. However, the study must be in the spirit of the preceding berachos, with the recognition that Torah includes a much deeper dimension.

To whom was the Torah given in such a way? Birchos hatorah tell us the answer: “Asher bochar bonu mikol ho’amim venosan lonu es toraso,” Hashem chose us from among all the nations and gave us His Torah.

Were someone else to study the same Torah that we do, it wouldn’t be the same. A Jew and, lehavdil, a non-Jew can learn the same text—for example, the Mishnah of Shnayim ochazin betallis. Yet, for the Jew it contains the most exalted properties, whereas for the non-Jew there is nothing beyond its intellectual face value. This isn’t merely to say that we feel and live with the inner sanctity of Torah while others do not. Rather, this is the way it is inherently; for us it is beis and for them it is aleph.

This is amazingly illustrated by the fact that our Torah commences with a beis, yet Ptolemy’s translation ended up beginning with an aleph. The beis, indicating Torah’s Heavenly origin, was completely lost when it was translated for a non-Jewish king.

Off to the Right Start

Every day, we preface Torah study with the appropriate berachos, so that our subsequent learning will be with the right perspective. The same is true with the year as a whole. The month of Tishrei lays the foundations for the entire year. Rosh Hashanah establishes kabolas ol; Yom Kippur—teshuvah and kaparah; Sukkos—“Basukkos hoshavti”; and Simchas Torah prepares us with the proper approach to learning Torah throughout the year.

On Simchas Torah, we aren’t rejoicing with the revealed parts of Torah, the things which we can comprehend, because that isn’t significantly different from other fields of wisdom, lehavdil. True, the wisdom of Torah is much deeper than other subjects, but it is an intellectual pursuit just the same. Rather, we are rejoicing with the inner, hidden dimension of Torah.

This is why we keep the Torah within its wrappings, to signify that it is the aleph, the Torah as it is beyond our understanding, that is the source of our joy. After dancing on Simchas Torah with this in mind, we can proceed to study Torah throughout the year, aware that behind whatever we comprehend, it remains “My Torah.”