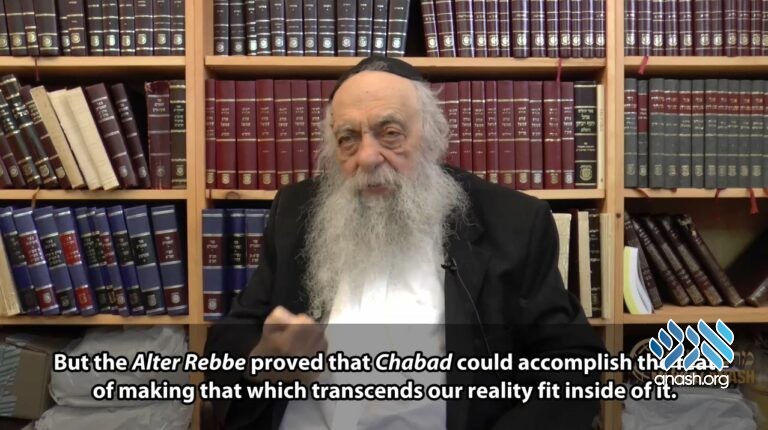 Watch: A short lesson by Reb Yoel Kahn on Chai Elul with English subtitles and transcript.

Watch a short lesson by Reb Yoel Kahn on Chai Elul with English subtitles and transcript.

There is a known minhag to recite the chapter of Tehillim corresponding to one’s age (for example, a thirteen-year-old child recites chapter 14, and so on). The Frierdiker Rebbe observed that per this minhag, the Baal Shem Tov began reciting chapter 48 when the Alter Rebbe was born (as Chai Elul 5505 was his 47th birthday).

What is the significance of this anecdote?

The Greatness of Creation

What does this mean?

Hashem’s greatness is expressed in the concept of briah yesh mei’ayin, creating the world ex nihilo. (Indeed, commenting on the possuk “Lecha Hashem hagedulah,” the Gemara states that the term gedulah, greatness, refers to the creation of the world.)

Creating yesh mei’ayin is a marvelous phenomenon that defies human ability. As the Midrash puts it, “Even if all the kings of the east and west were to convene, they would still be unable to create the wing of a single flea.” Not only can’t we actually create something yesh mei’ayin, we can’t even understand how it is possible for something to be created in such a way.

The possuk states, “Havaya and Elokim are [compared to] the sun and its shield.” If the sun’s covering would be removed, the world would be exposed to unbearable heat. In order for the world to benefit from the sun’s rays, they must shine via the sun’s “shield.” Similarly, while Havaya is the source of our existence, we need shem Elokim to mitigate the overwhelming bitul that would otherwise result. (This is why the ten statements with which the world was created mention the name of Elokim.)

Elokim is linked to the attribute of Malchus, or speech. Letters are likened to bricks. Just as many bricks combine to create a home and, in turn, a city, a multitude of letters results in words and sentences, ultimately forming “the city of Elokim.” The creation of the world is thus the result of “the city of Elokim.”

According to this approach, Hashem’s true greatness is far beyond our grasp; descending into shem Elokim accomplishes that even we can recognize it. However, there is a deeper interpretation to the words of the Midrash: Hashem’s greatness comes to the fore specifically in shem Elokim.

An example to this idea can be given from the Aron. The length of the Aron was 2.5 cubits, and there was a space of 10 empty cubits on either side of the Aron. Yet, the entire Kodesh Hakodoshim was 20 cubits long, and not 22.5, meaning that the Aron somehow didn’t occupy space!

One way of understanding this miracle is that the concept of being unlimited by space, as it exists Above, is beyond human perception. By wondrously causing the Aron to defy space, Hashem enabled spatially-confined beings like us to catch a glimpse of this phenomenon. From this perspective, this miracle constituted a yeridah: higher-than-space descended into the realm of physical space.

However, on a deeper level, this marvel was not a yeridah but an aliyah. To remain completely outside the concept of space would itself be a restriction—the inability to operate within the confines of space. The ultimate kind of greatness is the ability to transcend space inside its very parameters. Transcending space within a physical format is much greater than simply remaining higher than space.

Likewise, if shem Havaya would be revealed without the limits of shem Elokim, a different type of world would come into existence, where it would be no feat to be completely nullified to Hashem. This would represent a limited type of greatness. True greatness is for our world to be the product of tzimtzum and concealment, a yesh created through “the city of Elokim,” yet we harness the power of Torah and mitzvos to transform even such tachtonim into a dwelling place for Hashem. It is specifically in this way that the true unlimited greatness of Havaya is expressed.

Prior to the Baal Shem Tov, “Hashem echad” had been understood to mean that Hashem is the only authority, and His power is uncontested. The Baal Shem Tov revealed the radically new idea that Hashem is in fact the only true existence. This perspective had never been offered before, even in the works of Kabbalah. The Baal Shem Tov presented the fundamental chassidic idea that every being needs to be perpetually reanimated with the power of Hashem’s words, or else it simply ceases to exist. In effect, this means that there is no existence other than Hashem.

However, while the Baal Shem Tov clarified that Hashem is the only existence, he didn’t offer compelling explanations or arguments. It was an idea that required belief. It was only the Alter Rebbe who took the lofty concepts revealed by the Baal Shem Tov and offered a compelling body of thought designed to explain them.

How are we to look at the Alter Rebbe’s accomplishment? When one brings spiritual concepts into the world of intellect, does that constitute a yeridah or an aliyah?

One approach is to say that pure faith is greater. Faith is an unlimited power, displaying the neshamah in its full glory. By contrast, attempting to understand compromises that loftiness.

However, the opposite is true. The Alter Rebbe didn’t water down the lofty ideas presented by the Baal Shem Tov. Rather, he brought those ideas into the realm of intellect. When a person learns Chassidus Chabad, one ultimately internalizes even concepts that are above sechel.

This, then, is the significance of the fact that the Baal Shem Tov began reciting a new chapter of Tehillim—chapter 48—when the Alter Rebbe was born. The Alter Rebbe’s birth marked a new phase in the revelation of the Baal Shem Tov’s teachings. Until that point, the greatness of his teachings was limited to the realm of faith, and they were unable to penetrate the world of intellect (similar to shem Havaya without shem Elokim). The Alter Rebbe ushered in a new period, where “Havaya is great in the city of Elokim”—the world itself is imbued with a plane that transcends it.

It is said that when the Tanya was brought to R. Levi Yitzchak of Berditchov, he thumbed through page after page and exclaimed: “Amazing! He took such a great G-d and fit Him inside such a small book!” He wasn’t referring to its small number of pages; rather, intellect as a whole is a “small book.” He was astounded at the very possibility of explaining G-dliness in an accessible manner.

Someone was once challenged: Do you really believe Hashem is omnipotent? “Certainly!” he replied. Could Hashem fit an elephant through the eye of a needle? “Absolutely! He’ll either shrink the elephant or expand the hole…” He missed the point entirely, of course.

Similarly, what R. Levi Yitzchak truly meant was that comprehending G-dliness was now attainable within the framework of intellect (“a small book”), not just inside some incredible mind (“expanding the hole”) or by compromising on the revelation (“shrinking the elephant”).

Chai Elul 5505 thus marked the beginning of a new era for the Baal Shem Tov and Chassidus, a time when the “greatness of Havaya” would come to the fore in “the city of Elokim.”