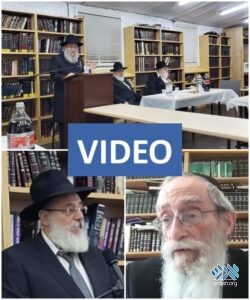 The broadcast of Vaad Or Vechom included 15 presenters, a Farbrengen at the Rebbe’s Ohel broadcast live and a special announcement from the White House.

The broadcast of Vaad oR Vechom included 15 presenters, a Farbrengen at the Rebbe’s Ohel broadcast live and a special announcement from the white house.

The Rebbe’s directives regarding the special day of 20 Av were fulfilled by thousands of Chassidim who participated in the virtual program arranged by Vaad Or Vechom.

The many presenters covered a wide range of topics, themes and styles ensuring that every individual left inspired and motivated to take action in their own personal lives.

A highlight of the program was the announcement of the recognition of the kever as a national heritage site during the Farbrengen near the Rebbe’s Ohel.

“To be able to bring this declaration to so many through the livestream was truly meaningful,” said  Rabbi Mendel Shemtov, Director of the Vaad Or Vechom Hahiskashrus, a division of the Iggud Hashluchim, the organization responsible for hosting the event. “At many occasions, the Rebbe thanked those responsible for the preservation and upkeep of his father’s gravesite, and certainly this measure is one that is deeply appreciated.”

The English event was a packed three hours of learning and farbrengen.

Rabbi Nochum Kaplan’s talk was particularly fascinating and uplifting as he shared stories, lessons and personal thoughts. Watch a replay of this uplifting Farbrengen here.

The program was preceded by a three hour Hebrew event which culminated Rabbi Shmuel Lew farbrenging, sharing the message the day holds for each of us. Watch a replay of this uplifting Farbrengen here.

To quote one of the participants: “It was really very nice and informative speakers, good choices.”

The full programs are available for replay at OrVechom.com/ChofAv