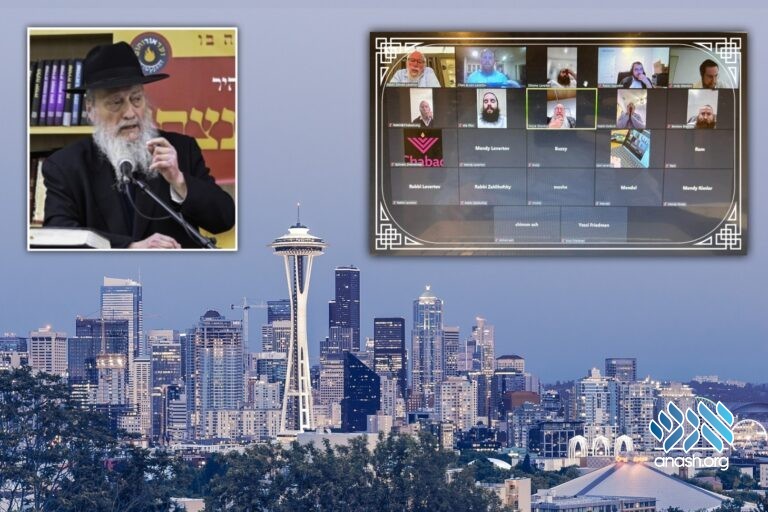 Tens of shluchim and shluchos gathered virtually over the last weeks to begin preparations for the Rebbe’s 120th birthday. In Washington, Rabbi Sholom Ber Levitin pledged to bring out ten new shluchim and establish three new funds to support shluchim in the State.

Tens of shluchim and shluchos gathered virtually over the last weeks to begin preparations for the Rebbe’s 120th birthday coming up in under three months.

The meetings, one held for Arizona shluchim, the other for those serving Washington State were arranged as part of an effort by Vaad Or Vechom Hahiskashrus to initiate 1210 new mosdos in time for Yud Alef Nissan as a gift for the Rebbe.

Senior Shliach to the Pacific North West of United States, Rabbi Sholom Ber Levitin shared with his fellow shluchim and shluchos the story of how he was sent on shlichus by the Rebbe, as part of marking the Rebbe’s shnas hashivim on Yud Alef Nissan Tof Shin Lamed Bais. The Rebbe said he would be adding seventy-one new institutions around the world. Rabbi and Rebbetzin Levitin were chosen as one of the Rebbe’s new shluchim and so this year will also mark fifty years of Chabad of Washington State.

“It is fitting that we should mark such an occasion in the way the Rebbe showed us,” Rabbi Levitin said. “So we will commit to growing Chabad of Washington this year bli neder by bringing out ten new shluchim to the state and giving a grant to each of them to help them get started on their shlichus.”

Rabbi Levitin also announced that he will be establishing three new funds to support shluchim to Washington State. The first will help shluchim and shluchos with tuition for their school-aged children, the second will be designated to pay travel expenses to bring mashpiim and speakers to farbreng as well as to fund various other programs for the shluchim as well as a separate fund for the shluchos.

The third fund will go towards arranging kinusim and gatherings for Washington’s shluchim families so that they can farbreng together and gain chizuk and kochos from their fellow shluchim or shluchos.

Arizona shluchim initiated a plan by which they will all gather weekly to learn together over Zoom and began discussions on how else they will mark the Rebbe’s 120th birthday. Several shluchim pledged to establish new projects, including a new preschool building. Others will come back with their ideas in the next few weeks.

Vaad Or Vechom Hahiskashrus is a division of Iggud Hashluchim dedicated to strengthening the bond of chassidim to the Rebbe. Or Vechom has many exciting initiatives underway to mark Yud Alef Nissan and the coming year. In this project, their goal is to have shluchim establish 1210 new mosdos. Mosdos refer to any permanent project, whether it is beginning a new shiur, setting up a fund with a specific purpose, or opening a new mikvah or school.

So far over 900 new mosdos have been pledged and organizers are working with Shluchim around the world to meet their goal in time for Yud Alef Nissan and give the Rebbe a gift from Chassidim that is fitting of the occasion.