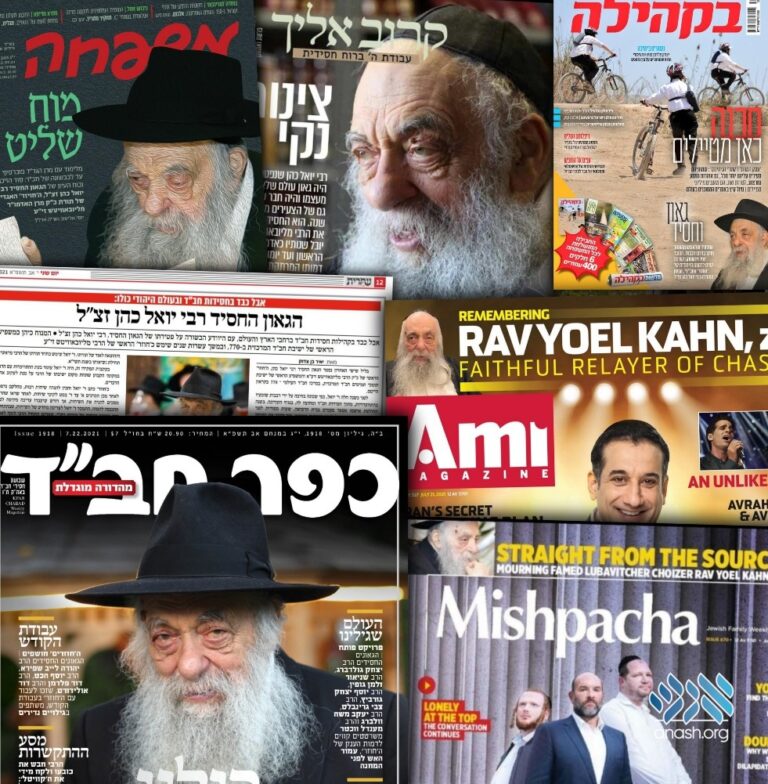 In the days since his passing of Reb Yoel Kahn, the Rebbe’s chief chozer and foremost teacher of Chassidus of the generation, tributes have been printed in Hebrew and English language magazines and newspapers from across the spectrum of frum communities.

In the days since his passing of Reb Yoel Kahn, the Rebbe‘s chief chozer and foremost teacher of Chassidus of the generation, tributes have been printed in Hebrew and English language magazines and newspapers from across the spectrum of frum communities.

For 42 years, starting from the beginning of the Rebbe’s nesius in 5710, and until the Rebbe’s last farbrengen in 5752, Reb Yoel served as the chief chozer of the Rebbe’s Torah, memorizing and repeating the sichos and ma’amarim that had been said over Shabbos or Yom Tov, when recording is forbidden. A large percentage of the Rebbe’s Torah that we have today is thanks to the dedication of Reb Yoel.

Besides for his role as a chozer, Reb Yoel also served as a teacher of Chassidus for tens of thousands. Starting with his shiurim as a mashpia in 770, continuing with countless students from other Chassidishe kreizen around the Tri-State area, and more recently the huge crowds that would gather in Eretz Yisroel to hear his talks, countless Yidden have learned from Reb Yoel. If one were to take into account those that listened to his recordings or learned from his seforim and articles, the number of those who could count Reb Yoel as a teacher reaches colossal numbers.

On Thursday, 6 Av, Reb Yoel passed away, and he was buried the next day just feet away from the Ohel of the Rebbe, whose teachings he dedicated his life to. The news was greeted with shock by Chabad chassidim around the world, among the countless other who had learned from his in person or through his recordings and books.

Ahead of Shabbos Parshas Va’etchanan, the first full week since Reb Yoel’s passing, virtually every frum weekly magazine chose to pay tribute on their front pages.

In English as well, the two main weekly frum magazines, Mishpacha and Ami, printed extensive articles on Reb Yoel, his role in relaying the Rebbe’s Torah, and his prominence as the foremost teacher of Chassidus in the generation. The magazines are expected in the newsstands in the coming days.