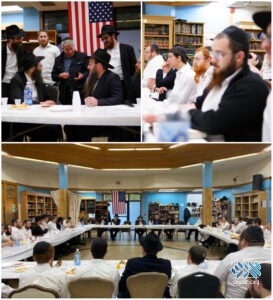 Last week, Yeshivas Lubavitch Toronto held a farbrengen in preparation for the upcoming special days of Chof Ches Sivan and Gimmel Tamuz. A Toronto resident joined to share his memories and correspondence with the Rebbe.

The speakers discussed the unique quality of Chof Ches Sivan, when the Rebbe and Rebbetzin were saved from war-torn Europe and arrived on the shores of the United States. Besides for the Rebbe’s miraculous rescue which we celebrate, this day also marks the beginning of a new era with the dissemination of Chassidus in America.

They also mentioned that as we prepare for Gimmel Tamuz, we should not just plan for a ‘geshmake,’ spiritually meaningful day, rather we should anticipate and daven for the real giluyim of Gimmel Tamuz with Moshiach.

An interesting guest who joined the farbrengen was a Toronto resident who had visited the yeshiva that morning for help fixing the knot of his Tefillin. He saw the sign announcing the upcoming farbrengen that night, and he returned to join. He had been a bochur in 770 in the late 5730s and 5740s, and he shared his memories and some interesting letters from the Rebbe that he received.