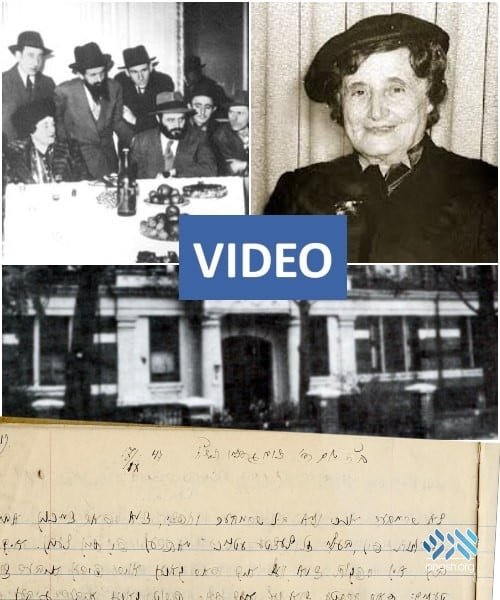 On Vov Tishrei we mark the Yom Hillulah of Rebbetzin Chana, the Rebbe’s mother. Download Mishnayos to learn in her memory, or watch a few short films which shed new light on the life of this extraordinary woman.

On Vov Tishrei we mark the Yom Hillulah of Rebbetzin Chana. The Rebbe encouraged us to learn from her ways for she was a true paradigm of an “Eizer K’negdo.”

The Yagdil Torah Kovetz Limmud includes stories from the Rebbetzin’s life, as well as a full selection of chapters of Mishnayos that begin with the letters of her name. Click here to download the Kovetz Limmud for Vov Tishrei.

Born in 1880 to an esteemed rabbinic family, Rebbetzin Chana gained fame for her scholarship already in her youth. When her husband Levi Yitzchak, whom she wed in 1900, became Chief Rabbi of Yekaterinoslav, Ukraine, Rebbetzin Chana played a pivotal role in assisting the local Jewish population and its influx of refugees at the outbreak of the First World War. After her husband was exiled by the Soviets for spreading Judaism, she remained by his side, enduring unfathomable suffering with poise and dignity.

Rebbetzin Chana would eventually make her way to New York in 1947, spending her remaining years in close proximity to her son. The Rebbe, who had not seen his mother in almost twenty years, bestowed the greatest honor to his mother and would visit her every day until her passing in 1964.

Despite her own regal status, she would come to be known simply and lovingly by the gift she gave the world as ‘The Rebbe’s Mother.’

Below are a few short films which shed new light on the life of this extraordinary woman.

Remembering Rebbetzin Chana – New Living Torah
Rabbi Nochum Kaplan, who was interviewed by JEM for the film, merited to have known the Rebbetzin as a child in Europe and later on in New York. His first-hand account of  personal interactions with her testify to the regal grace and dignity with which she carried herself even after a life of bitter hardships and loss.

Especially telling is the pride and motherly concern the Rebbitzen displayed for her son the Rebbe, and the exceptional honor the Rebbe bestowed to her in turn.
Watch the full film here.

The Life of Rebbetzin Chana Schneerson
The story behind the story of the Rebbe’s life.
Watch the full film here.

The Lubavitcher Rebbe On The Yahrzeit of His Mother, Rebbetzin Chana, 6 Tishrei, 5750-1989.

Click here to hear newly released audio of the Rebbe leading the prayers on 5 Tishrei 5728 – 1967.