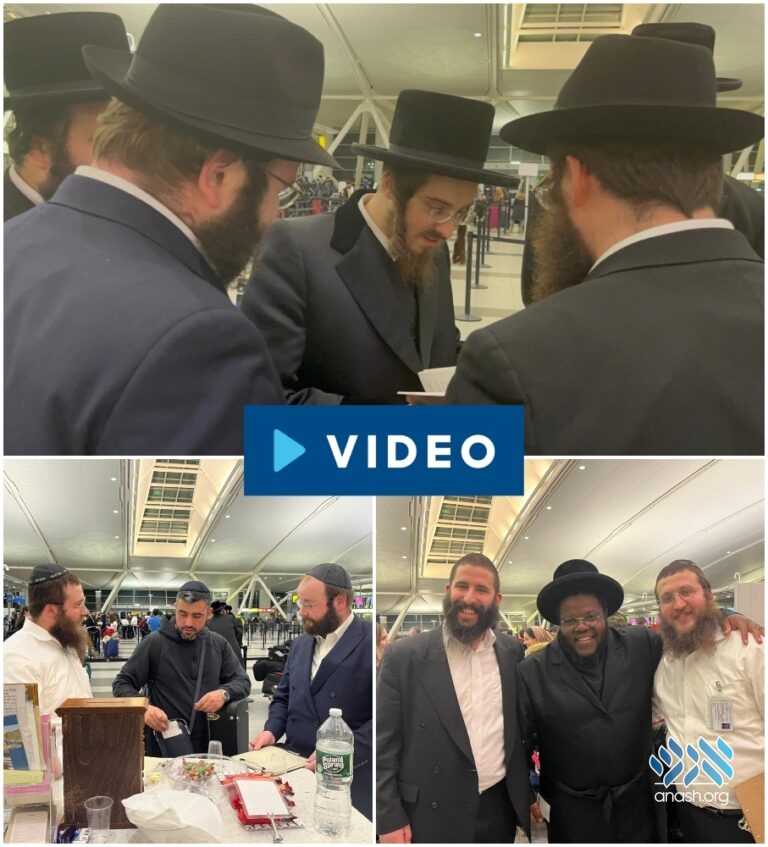 Bochurim manning the ChabadAir desk at JFK Airport had a busy evening on Monday night, with many heading back to Eretz Yisroel after Chanukah. They presented the Sadigura Rebbe with a specially-printed booklet.

Bochurim manning the ChabadAir desk at JFK Airport had a busy evening on Monday night, with many heading back to Eretz Yisroel after Chanukah.

The booth, headed by Rabbi Yossi Rap, offered the Yidden a chance to sign up for the Children’s Sefer Torah, the Sefer Torah haklalai, and to take part in the other mivtzoim of the Rebbe.

Among those traveling on Monday were singer Ishay Ribo and rapper Nissim Black, both of who happily signed their children up for the Children’s Torah.

Also passing by was the Sadigura Rebbe, who had arrived in New York for just a few hours to be menachem ovel his grandfather, who is sitting shiva after the passing of his sister.

Knowing in advance about his trip, bochur Shmuly Butler prepared and printed a special publication just for the occasion: A booklet containing the transcripts of two yechidusin that the Sadigura Rebbe’s (second) grandfather, the fifth Sadigura Rebbe known as the ‘Ikvei Abirim’, had with the Rebbe.

The Sadigura Rebbe warmly thanked the bochurim for their gift and praised the holy work they do bringing Yiddishkeit to the Yidden passing through the airport.