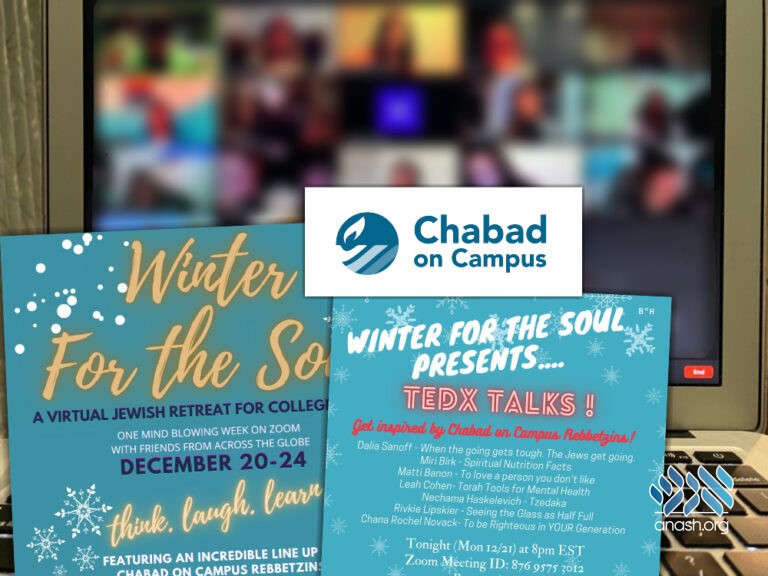 After a widely successful virtual Summer for the Soul retreat, the campus shluchos who arranged it knew that a winter retreat would be the next step. Just a few weeks later, over 150 students joined for 4 days of intense Torah study.

When Rachel heard about the Winter for the Soul virtual retreat from her campus Rebbetzin, she jumped at the opportunity.

From all across the country, Jewish college women of all backgrounds gathered on Zoom to learn, laugh and have a great time. Ask Dorothy, Andrea or Ariella and they’ll tell you about the packed schedule, fascinating topics and non-stop inspiration that gave them much to think about, long after the retreat had ended.

This past summer, campus Shluchos Mrs. Shifra Sharfstein and Mrs. Bracha Leeds organized a virtual retreat for college women called Summer for the Soul, offering three weeks of Torah classes on Zoom. Over 300 enthusiastic students joined in the learning.

After that success, they knew that a winter retreat would be the next step.

As the end of the semester rapidly approached, the Shluchos buckled down to work. After just one day of intense planning and phone calls to fellow Shluchos, they had recruited a group of teachers, put together a class schedule, designed a flyer and began advertising. Five short days later, 150 students had signed up.

“We had a phenomenal group of girls,” Mrs. Sharfstein told Anash.org. “It was amazing to see how quickly they signed up! They were so excited to have the opportunity to come learn, and all we had to do was offer it.”

Relevant and meaningful topics such as “Making Prayer Personal” and “Kabbalah of Relationships” were open for discussion. Night Specials included riveting TED Talks, Crossfire, and Ask Me Anything with the campus Rebbetzins.

It’s now a week later and students are still texting their Shluchos about the impact that the retreat has had on their lives. ”I’m so glad I got to take part in this program! It has been amazing and taught me so much!!”,  “It was an amazing growth experience”, “I would love to chat and hear some more of your insight!” and “Really gave me the light I needed right now!”

The appreciation and enthusiasm of the students can only be matched by the dedication of their talented Shluchos who put all their passion and energy into making the program a success.

“For me, Winter for the Soul was about the power of Jewish women uniting to lift each other up.” Mrs. Bracha Leeds shared. “As a shlucha, it was an incredible feeling to work with my colleagues across the globe to bring Jewish women together to learn Torah. Watching the students connect with each other and support each other in their own personal growth made all the hours worth it.”

Mrs. Shifra Sharfstein pointed out that since Covid has brought such difficult times, it’s especially meaningful to notice the opportunities that it has also led to. In-person programs may have been cancelled, but the virtual nature of the retreat made it possible for many more students to join.

“The potential for Hafotzas Hamaayanos is greater now more than ever, and people’s hearts are open to it,” she says. “All we need to do is reach out. Go for it!”