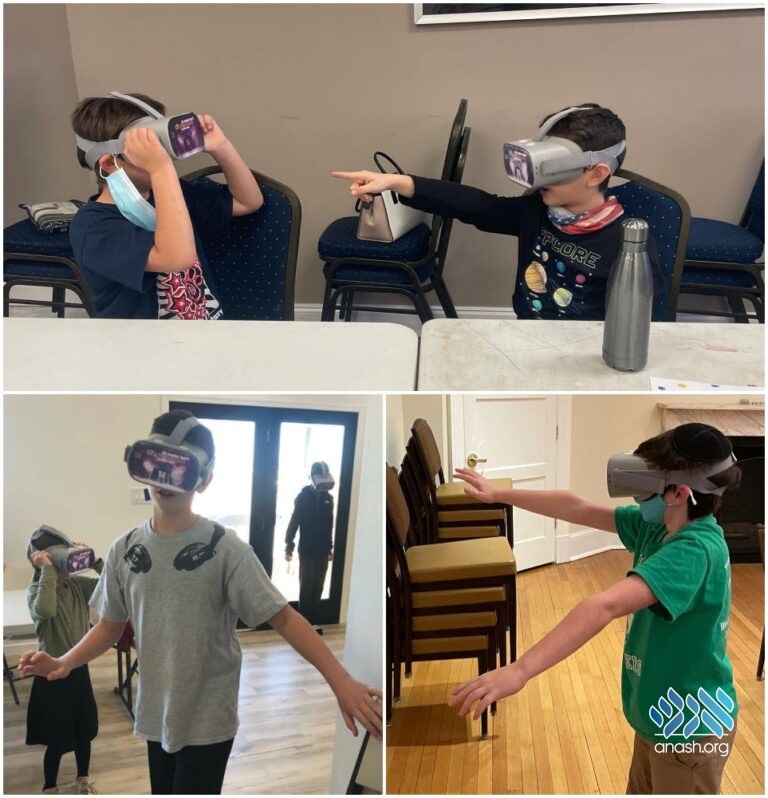 As part of the innovative Ckids curriculum, Chabad Hebrew School students around the world got a first-hand, virtual-reality taste of the Beis Hamikdash

This classroom didn’t feature kids sitting at desks in front of a teacher—instead they were walking around, laughing and shouting in delight. “Where are you?” a teacher asks her student, who’s non-stop shuffling around the room. “I’m at the holy of holies,” the student replies, not missing a beat.

All these students are wearing VR goggles and in the middle of a thrilling virtual reality tour of the Beis Hamikdash. In a customized video presentation, kids experienced the full might and power of the Holy Temple that has been a central theme of the Ckids Israel Quest curriculum being taught at Chabad Hebrew Schools around the world.

“This is what we call next-level, high-quality education,” says Mushky Adler, director of Talmud Torah Hebrew School in Pinellas County, FL. “It was an incredible opportunity for our students that will surely leave a great impact on these kids.”

“After months of learning about the Beis Hamikdash in the Israel Quest curriculum, this was a breakthrough chance for students to be truly transported thousands of years,” says Mushky Loewenthal, CKids Co-Director and the visionary behind the VR project and leading content developer of the curriculum.

“Our kids were totally blown away by the virtual reality,” says Shayna Freeman, director of Chabad of Sudbury, MA. “One boy said his favorite part was all the animals coming to the Beit Hamikdash—he wanted to know all the details about the animals, including where they come from and where they are stored in the Beis Hamikdash.”

As the educational backbone of Chabad Hebrew Schools, Ckids’ goal is to produce the highest quality educational materials using their extensive resources—including an in-house team creative managed by Chaya Zirkind that can expertly research, write, edit, film, design, animate, and produce a standout experience like this.

“The beautiful partnership between Shluchim and the CKids developement team is on target to change the landscape of Jewish education,” says Rabbi Moshe Kotlarsky, Vice Chairman of Merkos Linyonei Chinuch. “We’re excited to keep growing and launching new cutting-edge experiences.”

Much credit goes to mikdashvr.com for subsidizing the program for CKids Shluchim and their Hebrew Schools.