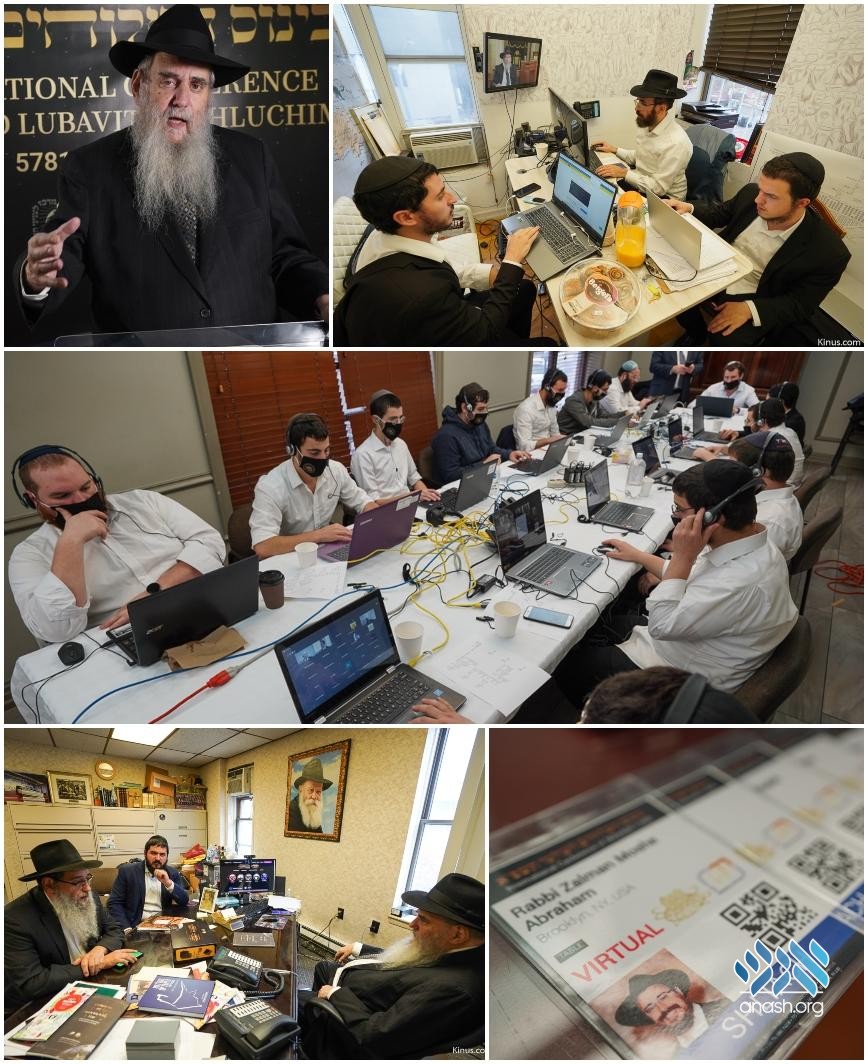 The 34th Annual International Kinus Hashluchim, taking place fully online this year, began on Thursday with shluchim tuning in for workshops and presentations. “The global nature of this year’s conference is an opportunity,” said Rabbi Moshe Kotlarsky.

The 34th Annual International Conference of Chabad Shluchim opens today with 5,200 emissaries participating. Instead of taking place in New York this year, the four-day conference will be hosted on a custom-built, virtual platform designed to host an international and interactive event of this magnitude. Conference organizers have asked emissaries not to travel to New York. Instead, each received a conference-to-go kit by mail.

Hosting a virtual conference presented unique challenges to the organizers. How to create a schedule to accommodate shluchim scattered over multiple time zones? How to allow shluchim to curate their own schedule of workshops dependant on the demographic of their community, their field experience, and language of preference? How to ensure the sessions stay open to shluchim only? Creative solutions were needed.

Organizers built a custom platform that incorporates Zoom meetings and livestreams. The platform has the ability to host fifteen individual sessions at a time, each with a maximum capacity of 1,000 participants. Shluchim will enter the portal using their own unique password and will navigate through their choice of sixty workshops, plenary sessions, and networking forums in three languages over the course of three days.

The international character of the conference will be highlighted this year as sessions will be led from eight different countries. “The global nature of this year’s conference is an opportunity,” said Rabbi Moshe Kotlarsky, vice chairman of Merkos L’Inyonei Chinuch, the educational arm of the  Chabad-Lubavitch movement. “Instead of bringing the shluchim to New York, we will take the conference to every corner of the world, allowing us to showcase diverse Jewish communities around the globe and the Chabad-Lubavitch emissaries at their helm.”

The post-Shabbat Saturday night program is always the most well-attended session and is treasured among shluchim as an evening of camaraderie and shared inspiration. This year it will almost max out Zoom’s time restriction of 24 hours. The program will initially be hosted by Australian shluchim, and will begin as Shabbat ends there, while it is still 5 AM on the east coast of the USA. As Shabbat ends around the world countries will join, passing hosting privileges from Australia to China, Russia, Israel, South Africa, France, England, Brazil, New York, California, and finally Alaska. The program is scheduled to last twenty-two hours!

Appropriately the conference theme is, “Shlichus in Every Circumstance,” and will include many discussions of the issues shluchim face in the covid-19 era as they continue to lead and grow, even while staying one step ahead of very difficult circumstances. The pandemic has thrown a wrench in the wheels of communal life and yet 83 new couples have been appointed as Chabad representatives in 2020 so far. In Lagos, Nigeria, Dubai in the UAE, Nizhny Novgorod, Russia, Mullumbimby, Australia, Belem, Brazil, Conches, Switzerland, and towns, cities, and counties all over the world they have established new Jewish communities or boosted growing ones. Through lockdowns, and loss, financial devastation, and emotional isolation, they have supported and led their communities as bastions of comfort, with resilience, and innovation, steadfastly persevering in their mission.

“The world has changed drastically in the last year, but the anchoring values that the Rebbe gave us proved as vital and sustaining as ever, giving the shluchim and lay leaders the confidence to move ahead in a changing world without losing their way,” said Rabbi Yehuda Krinsky, Chairman of Lubavitch Educational and Social Services Divisions. “And when the spirit driving our connection is transcendent, the power of our unity, like the bond between the Rebbe, the shluchim and the lay leaders is not diminished by geographic distance or the passage of time.”

Though planning a virtual conference involved navigating many hurdles, it also allayed one of the organizers’ biggest annual challenges; how to seat more than 5,000 shluchim and guests at the gala banquet—the conferences’ finale? This year’s gala banquet will include all the usual accouterments; the stirring speeches, musical accompaniment, and audiovisual presentations. But participants will BYOD, or bring their own dinner as they tune in from their own living rooms or regional pods where regulations allow it.

With 5,200 shluchim attending together with their families from Noumea, New Caledonia to Kailua-Kona, Hawaii, and everywhere in between, this year’s “largest sit-down dinner in New York,” as the gala has been dubbed, may just be the globe’s largest and most widespread family get-together.

Last year, 100,000 people tuned in to view the livestream of the banquet. This year organizers aren’t sure how many to expect. Scoring a guest seat at the banquet is usually a near-impossible feat, due to space constraints, but this year all are invited to join the gala banquet alongside the shluchim.

Tune in this Sunday, November 15 at 1 PM EST by visiting www.kinus.com/grandevent.