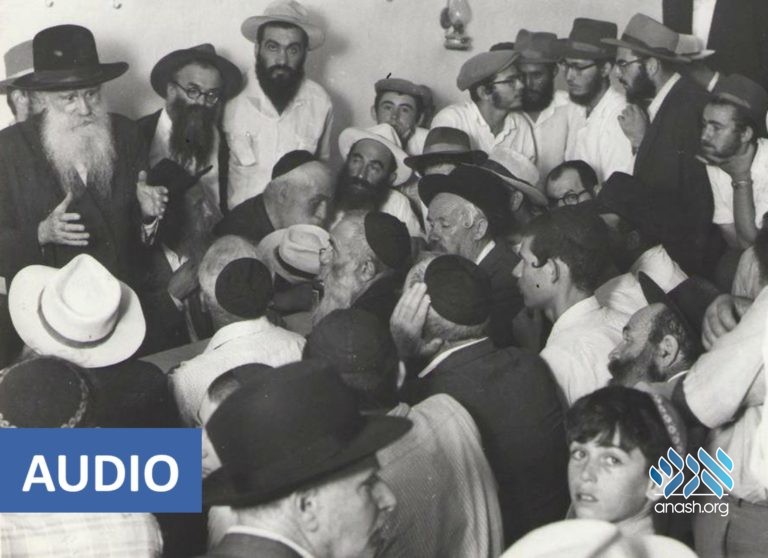 Listen to vintage audio clips sent to the Rebbe of a farbrengen in the Chabad shul in Meah Shearim on Yud-Tes Kislev, 5715/1954.

Courtesy of the Agudas Chabad Library and librarian Rabbi Berel Levin, we bring you these two vintage audio clips, totaling over one-and-a-half hours of a farbrengen in the Chabad shul in Meah Shearim on Yud-Tes Kislev, 5715/1954.

The farbrengen in the shul in Meah Shearim – also known as the Baal HaTanya Shul, for the shul is on that little street – would attract hundreds of Yerushalayim’s best and brightest.

Speakers include Harav Yaakov Landa, rov of Bnei Brak, who would make the trip to Yerushalayim until ill health kept him. In addition, two other elder mashpiyim can be heard: Reb Shaul Ber Zislin of Tel-Aviv, and Reb Nochum Shmarayahu (“Shmerel Batumer”) Sasonkin, the mashpia there.

These audio recording were sent to the Rebbe at the time, 65 years ago.

It is known that on nittel night, the Rebbe would listen to the recordings of the farbrengens on Yud-Tes Kislev in Kfar Chabad. It is possible that this farbrengen too was heard by the Rebbe on nittel nacht.