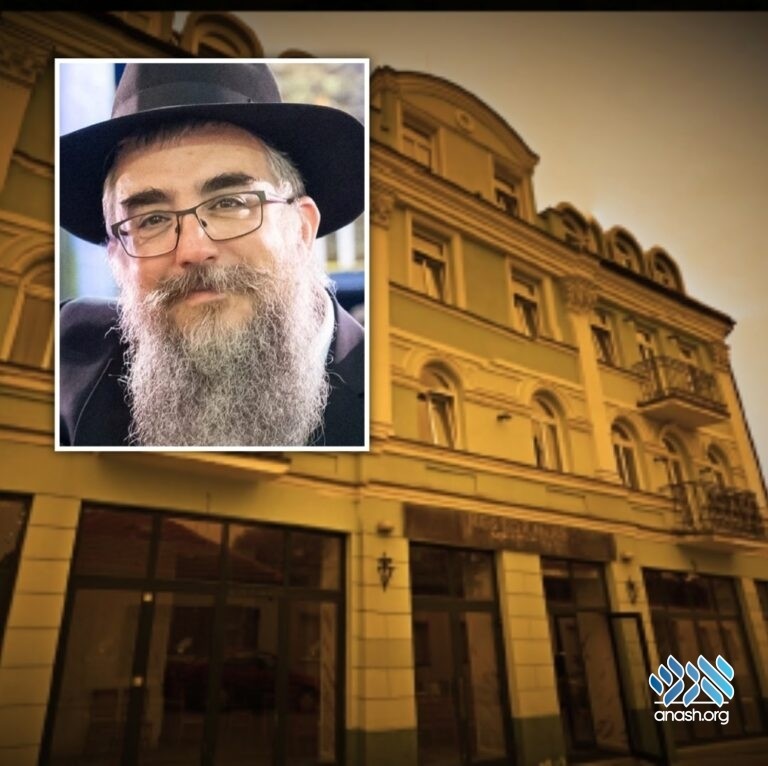 Rabbi Krinsky and the former site of the school

Mrs. Nechama Dina Krinsky, Chabad shlucha to Vilna and mother of 11 is facing a possible jail sentence after being accused by prosecutors of intentionally bankrupting the Jewish dayschool. Her husband and community members are accusing the court of corruption.

A Chabad shlucha and mother of 11 is facing a possible jail sentence in Lithuania, over what her husband and community members are calling a baseless charge and a prejudiced judicial system.

Prosecutors in Vilnius have accused Mrs. Nechama Dina Krinsky of intentionally causing the bankruptcy of the Menachemo Namai Gymnasium school under her management. The school closed in 2017 after being rendered bankrupt due to debt for unpaid taxes for workers’ salaries.

Mrs. Krinsky and her husband Rabbi Sholom Ber Krinsky have been serving as shluchim to the Lithuanian capital for the past 28 years. Since that time, they have worked tirelessly to provide for the spiritual and material needs of a community decimated by the Holocaust and ensuing Soviet repression.

Despite the clear evidence given to the court proving that she and her husband tried their utmost to raise the funds needed to avoid the school’s bankruptcy, the judge is continuing to pursue the case against Mrs. Krinsky. The school also had a full-time bookkeeper who was fully responsible for managing all of the finances.

According to the Krinskys, the school accrued debts after it failed to receive any money from restitution payments for World War II. Millions of euros are allocated annually for Lithuania’s Jewish institutions via the Good Will Fund foundation, led by the American Jewish Community (AJC)

Rabbi Krinsky accused the restitution fund in Lithuania (known as the Good Will Foundation) of brazen discrimination against the Chabad school, which has been doing Jewish religious work countrywide for 28 years.

“They refused us to be present in meetings for many years, never delivered any funding to our school, and gave meager amounts to Chabad institutions. They repeatedly ignored our requests for an emergency donation in order to secure our school’s future. They’re the ones guilty of the ongoing case against my wife,” Rabbi Krinsky said.

Additionally, Rabbi Krinsky says there have been numerous instances of prosecutorial misconduct since the start of this case. Investigators initially used deceptive practices to try to gain access to the school claiming that they were trying to enroll a child. When that failed they used trickery to have others lure Mrs. Krinsky to a notary office where they arrested her, holding her for about 30 hours.

During the pre-trial investigation, the prosecutor demanded that Mrs. Krinsky be arrested for two months over the month of Tishrei of 2021. Mrs. Krinsky is a mother of eleven children and three foster children as well as a communal leader, yet she was treated as a common criminal.

Rabbi Krinsky says that the judge in the case has acted aggressively against Mrs. Krinsky and intimidated her defense witnesses even threatening to have the case tried without her being present.

A member of Vilnius’ Jewish community blamed the court for “continuing to prosecute Dina despite the evidence presented, showing that she and her husband attempted to stop the school from losing money.”

“She’s a mother to 11 children and three foster children, a leader of the community, and she’s being treated like the lowest criminal,” the man said.

Another member of the community, Miriam Danisov said “I have met many Jewish people from different walks of life and seen different Jewish organizations, but never have I ever met such dedicated people like Rabbi and Mrs. Krinsky who have dedicated all their lives for one purpose only – to revive Jewish life in Lithuania.

“They became founders and leaders of the Jewish community in every way for nearly 30 years, both physically and spiritually. They’ve helped me a lot and funded my tuition and living costs so I could reconnect with my Jewish roots.”

A decision in the trial is expected to be given in about two and a half weeks, on 8 Shevat.