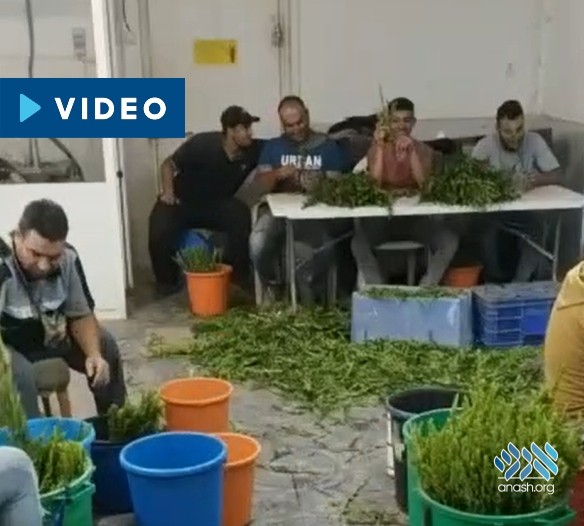 A serious breach in halacha was discovered after videos circulating in Arab media showed non-Jew determining the Kashrus of hadassim sealed with a mehudar hechsher.

Israeli social media accounts on Monday warned of a serious breach in halacha after videos were found online of Arabs of packaging hadassim sealed with a mehudar hechsher.

One of the Arabs workers apparently videoed his friends at work and posted the videos on his TikTok account. The first video was posted about ten days ago, with another eight videos posted since then.

“It’s usually written on the package that ‘Avreichim, Yiryei Shamayim’ sorted the hadasim and we rely on the hechsher,” one outraged customer told B’Chadrei Chareidim. “Now I realize that I could have been using hadassim with a questionable hechsher every year – this is customer deceit.”

A reporter spoke to poskim who said that although non-Jews can package hadassim, there’s no opinion that non-Jews can cut and sort the hadassim and decide what’s kosher or not. In one of the videos, an Arab can be seen picking hadassim from a bin and placing them in plastic packaging. In another video, the Arabs are seen trimming and examining the hadassim.

One Israeli social media user posted one of the videos, which plays raucous Arab music in the background as the Arabs sort the hadassim, on Twitter and sardonically wrote: “Sorted by avreichim Yiryei Shamayim, Talmidei Chachamim, according to all the chumros and intricacies of halacha.”

Following the report, the Arab’s boss apparently warned him to remove the videos as a before and after picture of his TikTok account shows the missing “hadassim” videos.