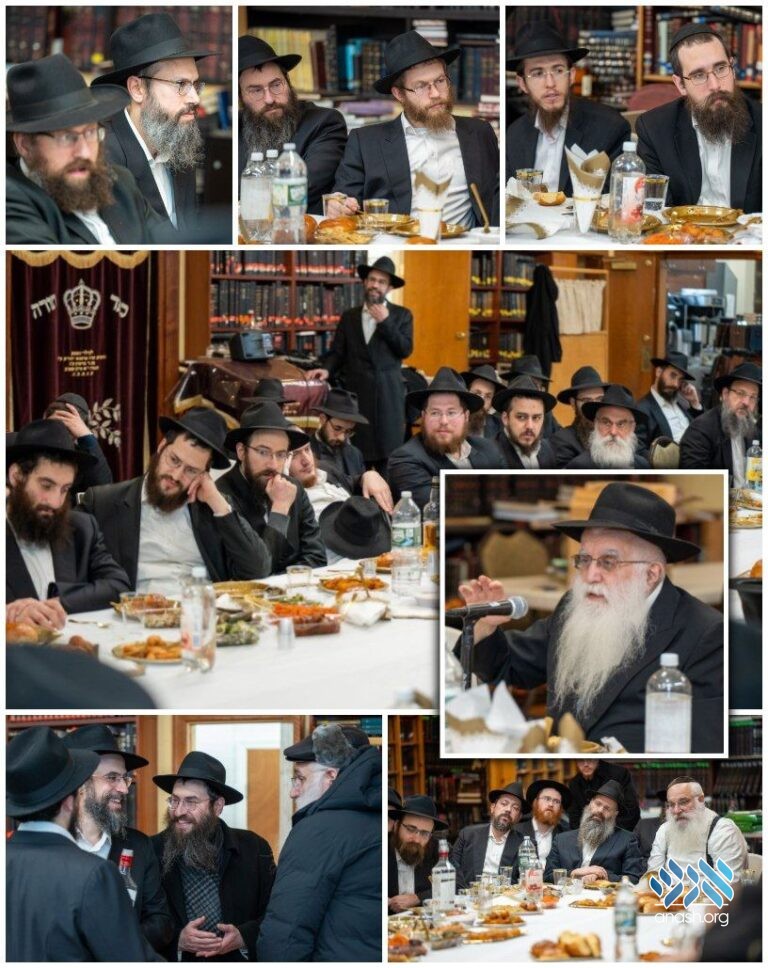 Over 100 mechanchim gathered for Igud Hamelamdim’s Chinuch farbrengen with Rabbi Yosef Minkowitz who empowered the melamdim and challenged them to new heights.

Each year, on Yud Shevat, Crown Heights is blessed with an abundance of special farbrengens. But there is one farbrengen that earns special distinction: the annual Yud Shevat farbrengen for mechanchim arranged by Lubavitch chinuch organization Igud Hamelamdim

This year, 100 mechanchim, each a community influencer in their own circle, came together to reenergize their passion for chinuch with Chassidus and chassidishe values. At a lavish seudah, the melamdim heard words of inspiration from veteran Montreal Mechanech Rabbi Yosef Minkowitz.

In his intriguing style, Rabbi Minkowitz enthralled the crowd sharing insightful chinuch stories, experiences by the Rebbe, and inspirational anecdotes.

“When the Frierdiker Rebbe came to America, the first thing he dealt with was chinuch – מרכז לענייני חינוך. If you look in the back of the Tehilas Hashem Siddur, you can see a full page on the chinuch activities – the nuts and bolts of raising a generation.

“If you view yourself as an employee, Chinuch is a pretty lousy job. It absorbs you 24/7. But if you see it as a Shlichus, it’s a tremendous zechus. And it is a bona fide shlichus which is why mechanchim were included in Sefer Hashluchim.

“Zechus, of course, comes together with responsibility, as the Rebbe would write, הזכות וגודל האחריות. And a mechanech has special powers. As the Rebbe points out from the story of Rav Shmuel Bar Sheilas whose mind was on his students that a mechanech’s thoughts can have an effect!

“At one Yud Shvat farbrengen, the Rebbe shared something which he said is relevant to mechanchim of all ages. The first and most important thing is to impress upon every talmid how his Yiddishkeit is his whole life, and without it, he’s not a mentch!

“Entering Chinuch, the Rebbe said, you must be a רופא נשמות עמו ישראל, a healer of Yiddishe neshamos. The Rebbe’s way is preventative medicine, that’s the healing we have to use in helping our youth.”

In noting the importance of clean speech, Rabbi Minkowitz shared how the Rebbe would refer to a certain street in Brownsville as “די גאס וואס פירט צו די מקוה”, the street that leads to the mikvah, rather than call it by its idolatrous name.

“Through we host extensive courses and seminars throughout the year on the techniques of teaching, nothing compares to the impact of a farbrengen. That’s where the melamdim focus on their identity and mission as a chassidishe melamed. They sit together with fellow Lubavitcher melamdim, to hear and discuss what chassidishe chinuch is meant to be.”