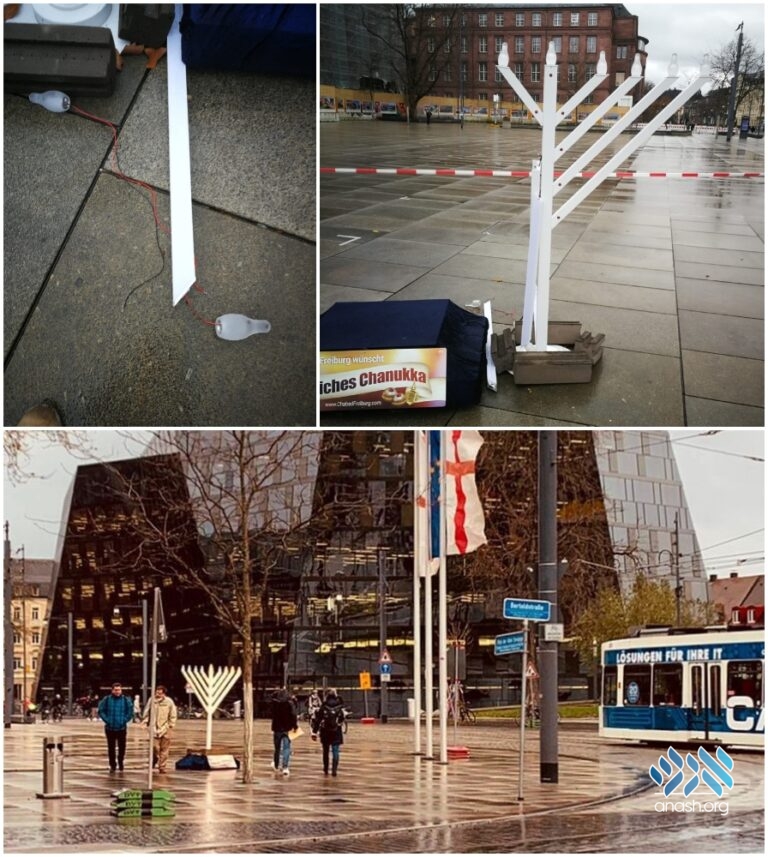 The police in Freiburg, Germany, opened an investigation after vandals destroyed a menorah that stood at the site of the old shul that was destroyed by Nazis during Kristallnacht.

After vandals destroyed a menorah that stood at the site of another act of antisemitic violence seven decades ago, the local shliach pledged that he would not be deterred.

The damaged menorah stood in the German city of Freiburg im Breisgau, usually referred to as Freiburg. The city once had a shul and Jewish community of 350, but the shul was destroyed during Kristallnacht, and the Yidden were deported over the years of 1940-1942.

In more recent years, a memorial has been created in the form of the ‘footprint’ in marble on the site of the city’s shul. The memorial is a fountain and contains a bronze plaque commemorating the original building and the Jewish community which perished.

For the last seven years, local shliach Rabbi Yanky Gitler has placed a menorah at the memorial site, shining light at a place that once shined with the light of Yidden davening and learning.

This year, when passing the menorah on one of the days of Chanukah, Rabbi Gitler was shocked to see that the menorah was vandalized and half of its branches were knocked off. The vandalism was the work of a group of anti-semites who couldn’t bear to see the revival of Jewish life in Germany.

The local police in Freiburg, Germany, immediately opened an investigation into the vandalism and are working to find the culprits.

Yet, despite the act of vandalism, and the rising cases of antisemitism across Germany, Rabbi Gitlin is pledging not to be deterred.

“No one can extinguish the light that stands on the exact place of the remains of the Shul that was destroyed on Kristallnacht, and nothing can destroy the light emanating from the flourishing Jewish community of Germany today,” he said.

“We will continue to spread light, knowing that a little light can dispel much darkness,” he said.