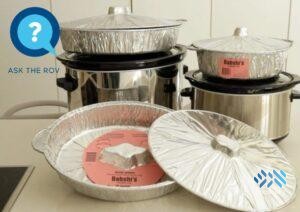 Ask the Rov: Is there anything I should be aware of when using a Crock-Pot on Shabbos?

As a rule, Chazal prohibit leaving food on a source of heat at the start of Shabbos (shehiya) out of concern that you may increase the heat to quicken the cooking. One must cover the source of heat to demonstrate that you don’t need so much heat. (If the food is already at least halfway ready (maachal ben drusai) before Shabbos, and will be ready in any case for the meal without any adjustment, this is sufficient to permit shehiya according to the Alter Rebbe, but he leaves room for stringency that the food be fully cooked to the point that adjusting the heat will ruin it. Additionally, returning the food on Shabbos is subject to the conditions of chazara.)

If the Crock-Pot has multiple levels of heat, the shehiya concern applies. Since the source of heat must be covered, it’s not enough to cover or remove the knob, rather the inside surface of the heating element must be lined with silver foil.

Chazal also forbade insulating food (hatmana) in a heat increasing substance (mosif hevel) before Shabbos, as a safeguard against insulating the food with burning embers (which you may mistakenly stoke on Shabbos). This is forbidden lechatchila even for food that deteriorates when cooked more. However, all foods may be insulated on erev Shabbos with materials that don’t increase heat and only maintain the heat.

A classic example is wrapping a hot pot of soup. If the pot isn’t on a source of heat, it may be completely wrapped before Shabbos in a towel. If the pot is on the blech, insulating it with a towel—even to just cover the majority height of the sides without covering the top (according to the Alter Rebbe)—is prohibited. One may cover it with a towel on top if the majority of the pot’s walls are left exposed.

By a Crock-Pot, the pot is surrounded by a heating element, which would seem to fit the criteria of hatmana. It differs, however, from the typical hatmana in that there is some air space between the pot and the surrounding walls. R. Shlomo Zalman Auerbach held that since the airspace doesn’t interfere with the cooking process, it is still hatmana and forbidden. Other achronim hold that even a slight space is enough to eliminate the hatmana issue, and this is the implication of the Alter Rebbe as well. Interestingly, some poskim write that R. Auerbach retracted shortly before his passing.

When lining the Crock-Pot with silver foil, one must be careful to make it flat and leave air space around the pot so it shouldn’t constitute hatmana. Some suggest placing a stone or foil ball under the pot so it is elevated and has space around it.