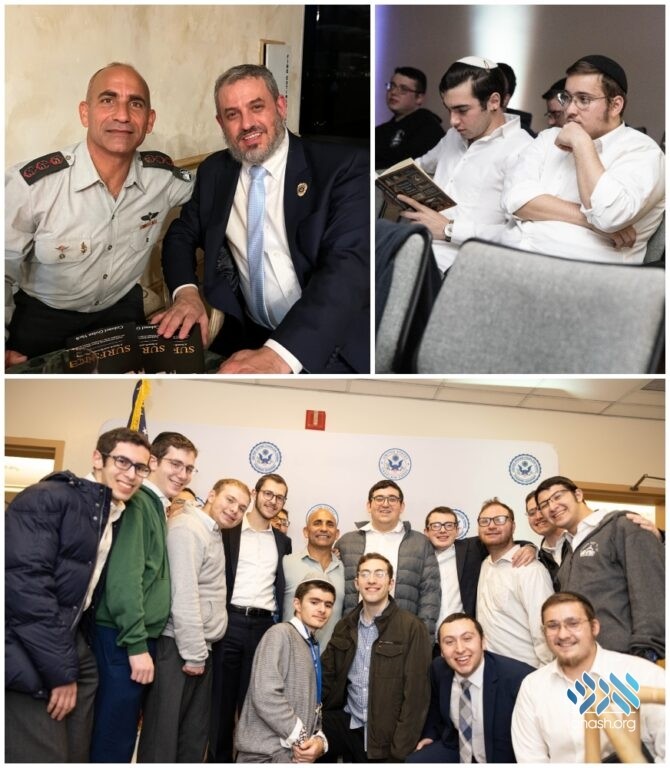 Commander of the Israeli Defense Forces Rescue Unit Colonel Golan Vach who led the Israeli Rescue Operations in Surfside, Florida was hosted by the United States Chaplain Corps for a series of lectures.

The events took place on the YU campus in Washington Heights in New York City. After a festive meal on Friday night, Colonel Vach gave a rousing lecture to students sharing information about rescue operations coordinated by the IDF Rescue Unit around the world.

“We have been in Haiti, Chile, Mexico, and the U.S. among many countries, to rescue lives, because Israel cares about the world,” said Vach at the Friday night lecture on YUCampus.

Colonel Vach became a household name in the U.S after leading a special Israeli force in Surfside, Florida in June 2021. Vach appeared on the news multiple times daily discussing the search and rescue mission and then search and recovery operations when ninety-eight people lost their lives due to a tragic building collapse.

Vach explained that the Surfside mission was the first and only mission for which a foreign country landed on U.S. soil to lead a rescue operation “and it changed my life.” Said Vach.

Shabbos afternoon, The USCC and YU held a round table together with Colonel Vach and the first responder’s volunteer group Hatzalah. The conversation focused on the multiple levels of services provided by chaplains, soldiers, and first responders.

This was a unique experience for the YU students preparing for future careers requiring critical leadership skills. Mendy Coen, a Crown Heights Activist, YU alumni, and one of the chaplain organizers of this event said:  “Exploring the work of different disciplines in foreign countries and by different governments, leading to care and resources for other communities is extraordinary and important for us now and for our future.”

The USCC is a national chaplain agency with the mission of recruiting new chaplains, providing training and certification, and sending out chaplains to community missions around the U.S.A.

A USCC chaplain’s mission is “To defuse pain and ease tension by means of language, psychology and emotional support.”

For more information about the USCC visit www.uschaplainscorps.us or email [email protected]