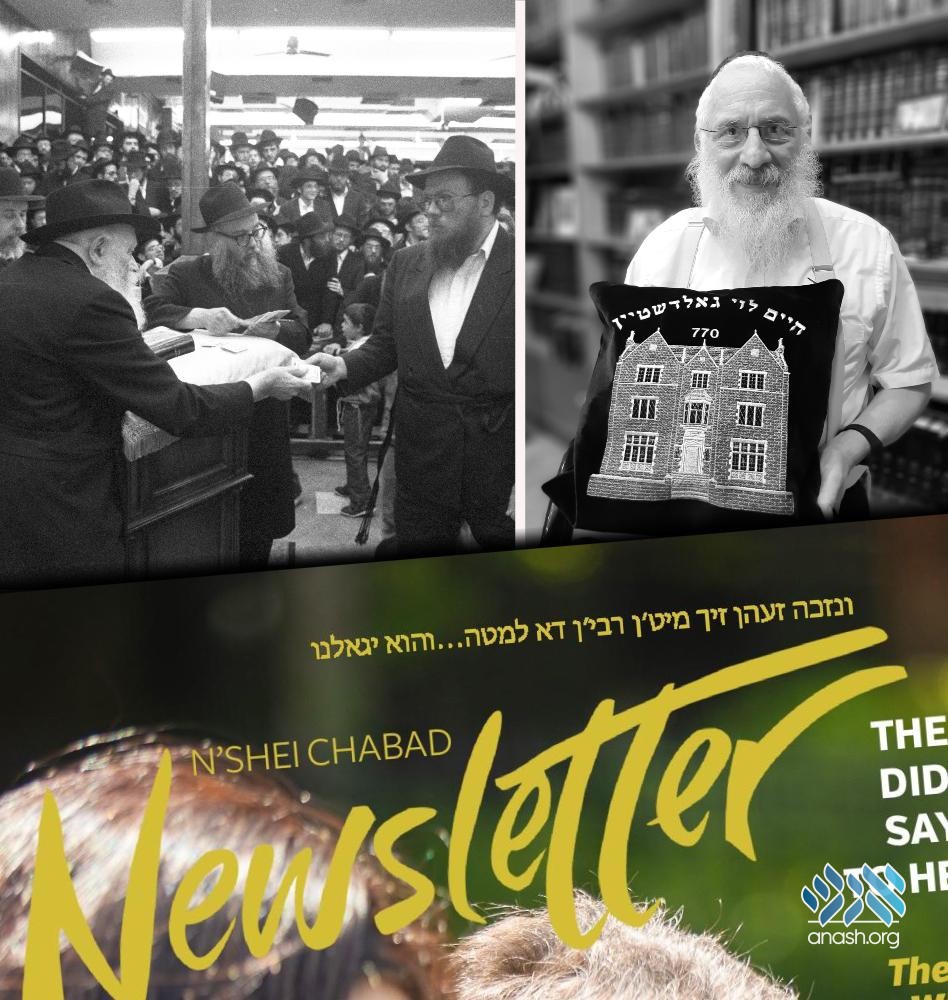 The Kislev N’shei Chabad Newsletter, which will soon be in stores, features the story of Mrs. Baila Goldstein, whose husband, Rabbi Chaim Levi Goldstein, was hospitalized for several months, along with other exciting and captivating articles.

Kislev N’shei Chabad Newsletter is at the printer now! That means it will be in stores the week before Chanukah, iy”h. Or subscribe now to get it mailed to you, at nsheichabadnewsletter.com.

Get ready to meet Mrs. Baila Goldstein, whose husband, Rabbi Chaim Levi Goldstein, was hospitalized for several months (including over Pesach) with COVID19.

As NCN‘s editor-in-chief Rishe Deitsch told Anash.org, “It was more like a chassidishe farbrengen than an interview, and ended with Baila and me humming ‘I Believe in Hashem’  in the rain on the Goldsteins’ front porch while waiting for my ride home.”

The Kislev NCN includes the Goldstein family’s saga, including the stories of people who went above and beyond the call of duty to help them during their crisis, and how they responded to the news that their husband and father was not going to make it. They added the name Chaim and ordered new tallis and tefillin bags with the new name. (See photo below.)

Rabbi Motty Lipskier, in his guest editorial entitled “All Thanks to My Mother,” recalls the Rebbe saying about his mother: “Any qualities I have are thanks to her.” He reminds us that children don’t need two fathers; they need one father and one mother who is fully dedicated to them and the home.

Then slow down and (this cannot be rushed) read Esther Etiquette, where Chanala Kornfeld interviews her aunt Mindy Chazan, a woman who lived that goal for the past several decades. As Mindy told Chanala:

When I look around at some homes today, they seem like gas stations. People walk in, fill up and leave. The akeres habayis has become the attendant, pumping food into a passing customer and then fueling the next drive-by. We are losing our appreciation of the home. The home is where we live and work is where we go, but some people now live at work and pop into their homes. The home is just a stopover.

Mindy is clear about the solution to this problem.

The Rebbe repeatedly addressed this issue. One sichah is excerpted in the Kislev issue. The Rebbe says:

“…Some mistakenly claim, “It is a victory for a woman to be the same as a man, and therefore she has to try and do battle to prove that she can hold the same position as a man. She, too, can leave home early in the morning and come home late at night, tired. In this way she shows she is not inferior to him, for she can do exactly what he does.”

At the end of this heartfelt sichah, the Rebbe concludes:

“This is the heartache… if you take a look at what is going on and what needs to be fixed. But instead [of fixing the problems], we find Jews who have nothing more to worry about than to tear women away from their true mission, searching for ways to include them in a minyan, etc. They make a big [women’s liberation] parade out of it, and with this they claim to have lifted women to their true potential?!“

What else is in the upcoming Kislev issue?

Miriam Weiss, revered wife, mother and grandmother, shares her cooking secrets as recalled by her granddaughter, Rochie Farkash. It’s not about how long to simmer the soup but rather about calling upon our mothers Sarah, Rivkah, Rochel and Leah to help us when we are faltering.

Sheli Atara Man works for Gan Menachem Kiddie Korner preschool in Brooklyn Heights (with shluchim Rabbi Aaron L. and Shternie Raskin), and one day she fell down the steps of the preschool as she was leaving. Who noticed and came to her aid? An elderly Holocaust survivor named Mrs. Ruth Reiser. This led to an unlikely friendship and now a beautiful feature for readers of the NCN to enjoy and benefit from. Mrs. Reiser and Sheli are also on the cover thanks to photographer Meir Pliskin who drove to Brooklyn Heights to do the photoshoot on the Brooklyn Heights Promenade.

All this and more in your upcoming Kislev N’shei Chabad Newsletter!

Click here nsheichabadnewsletter.com to subscribe, or buy it in a Crown Heights store the week before Chanukah!