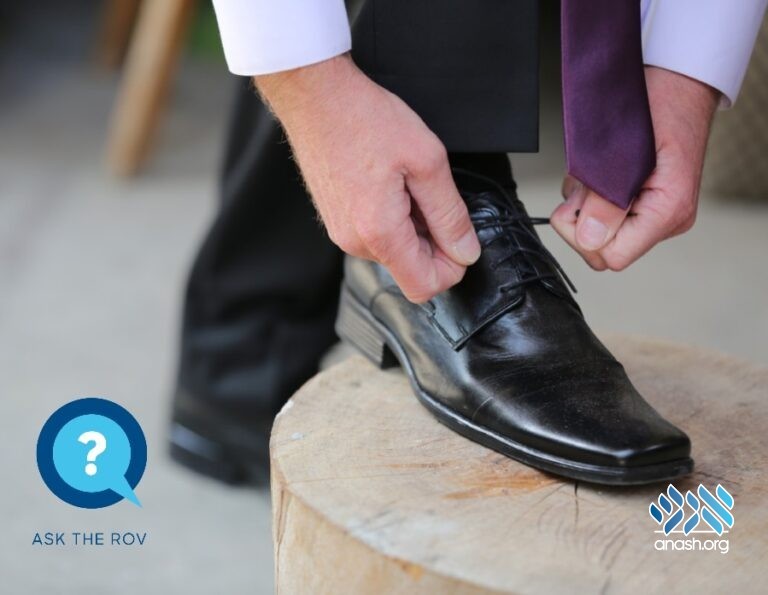 Ask the Rov: I was making a bow on my shoes and it mistakenly turned into a double knot. Is there any way to get my shoes off?

Among the thirty-nine melachos are Kosheir (tying) and Matir (untying). Depending on how strong or professional the knot is, and how long it is meant to last, its tying and untying can either be prohibited min haTorah, miderabanan, or in some cases, permitted.

A single tie — e.g., tying two flaps of a garbage bag with one overhand knot — is permitted regardless of how long he wants it to last, since it doesn’t have the strength to last and isn’t considered a “knot” at all.1 Making a bow or slipknot on its own is not either considered tying and is completely permitted, even if making a double one.2

A double knot — e.g., tying the flaps with two overhand knots — or knotting a string around itself — e.g. to prevent a tzitzis string from unraveling — are possibly considered “professional” knots, and are forbidden to make even for a short time.3

What about a bow on top of a single overhand knot—e.g., as people tie their shoes?

Some poskim hold that since each one on its own isn’t a halachic knot, there is no problem to combine them as well, even if they remain tied for a long time (e.g. garbage bag). Others, however, argue that since the combination is stronger, it may not be tied to last more than 24 hours (e.g. shoes or sashes). The Alter Rebbe seemingly rules stringently and only permits if one plans to untie it the same day.4

What if one was tying a regular bow and it mistakenly became a double knot?

While some argue that it may be untied unconditionally since there was no intention to make a professional knot,5 the Ketzos Hashulchan considered it a regular short-term knot which may be only untied if it causes major discomfort (i.e. not being able to remove one’s shoes).6 This is because (a) there is doubt whether a double knot is truly considered a “professional” knot, and (b) some hold that any knot that isn’t meant to last more than 24 hours may be untied, and Chazal were thus lenient in cases of major discomfort.7

If a knot was made but it wasn’t yet pulled tight, it may be undone.8