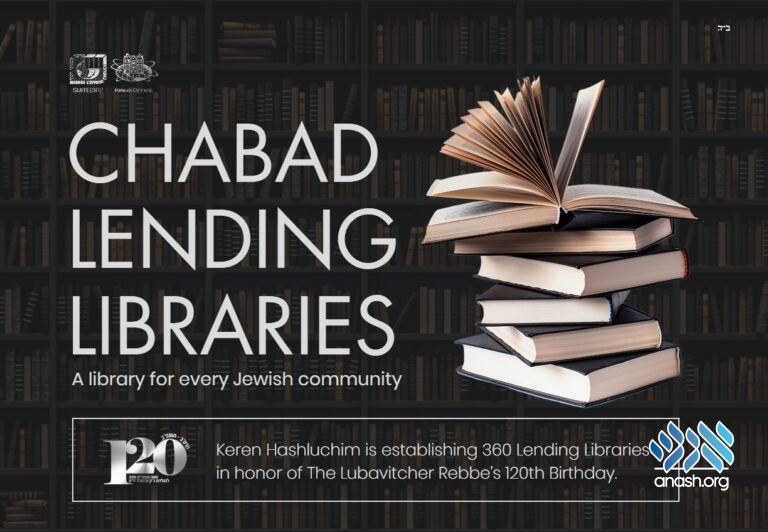 Each year, Hei Teves, the day of Didan Netzach, brings renewed energy and focus on purchasing, studying, and disseminating holy sefarim. As Chassidim quickly understood then and continue to see today, the victory was far from an individualized battle of custody, but rather a global, cosmic push against the Rebbe’s activities and everything Chassidim stand for. With the decisive legal victory that day, the Rebbe taught that it was now high time to expand activities, particularly in the area of holy sefarim and the teachings they contain.

Indeed, the past few decades have seen droves of people flocking to brick-and-mortar book stores, pop-up shops, and online marketplaces to purchase sefarim.

This year in honor of Hei Teves, Merkos has launched www.360libraries.org, to give people a unique opportunity to fulfill the Rebbe’s directive in its entirety. Celebrating the auspicious day by not just purchasing books for oneself but by gifting sefarim to others—some of whom would most likely otherwise never place their hands on a holy book.

Just one month ago, as the International Kinus Hashluchim set in, Rabbi Moshe Kotlarsky, Chairman of The International Kinus Hashluchim, announced the establishment of the first 180 out of 360 new libraries in Chabad houses across the globe. “The Rebbe taught us that access to Torah books is vital for every Jewish community, just as every city needs a doctor and other professionals to be habitable,” he said.

This unprecedented push to expand community libraries comes on the fiftieth anniversary of when the Rebbe pushed this very idea. Fifty years ago, on the 6th of Tishrei 5733 (1972), the Rebbe urged every Jewish community to open a Jewish library for the local Jewish public.  The Rebbe personally contributed sefarim to every new library established by any shliach or community. This call to action led Jewish communities worldwide to invest in a local Torah lending library, giving thousands of Jews direct access to Jewish knowledge and spiritual nourishment.

Fifty years later, Three-hundred-sixty Chabad houses worldwide are on the cusp of opening a fully-stocked Jewish library of their own.

And now, in honor of Hei Teves, Merkos has made sponsorship opportunities available at www.360libraries.org, enabling anyone to participate in this unparalleled mivtza sefarim. Indeed, when the Rebbe initially promoted the idea of purchasing sefarim, the Rebbe personally gave participants a dollar to either purchase a sefer of their own or to give to someone else to do the same.

If the opposition back then claimed that Chabad is not “active,” what better way to counter that preposterous claim than to participate in an effort that is nothing short of breathless “activity”—bringing holy sefarim and their messages to places until now considered unthinkable.

Selected by raffle, the Chabad Houses have already been designated and will soon receive their first shipment of books. All told, 100,000 books will be shipped to every corner of the globe.

Participants in the raffle chose one of three library packages, each comprising ten thousand books. Following the guidance the Rebbe laid out fifty years ago, one package option concentrates on books for beginning students of Judaism. In contrast, the other two packages focus on advanced studies in Talmud and Halachah or Chassidus, respectively. But every package of sefarim has been carefully designed to include something for all age groups and backgrounds.

Merkos tailored the books bound for each shliach to suit the local community’s preferred language, including French, Spanish, and Russian. In addition, Shluchim were empowered to customize their sefarim bundle to appeal to children, teens, or adults.

“For too long, a Jewish library was just a dream for many shluchim,” said Rabbi Mendy Kotlarsky, Executive Director of Merkos 302. “Every community needs an open space where any Jew can come to learn Torah or borrow a Torah book, with no strings attached.”