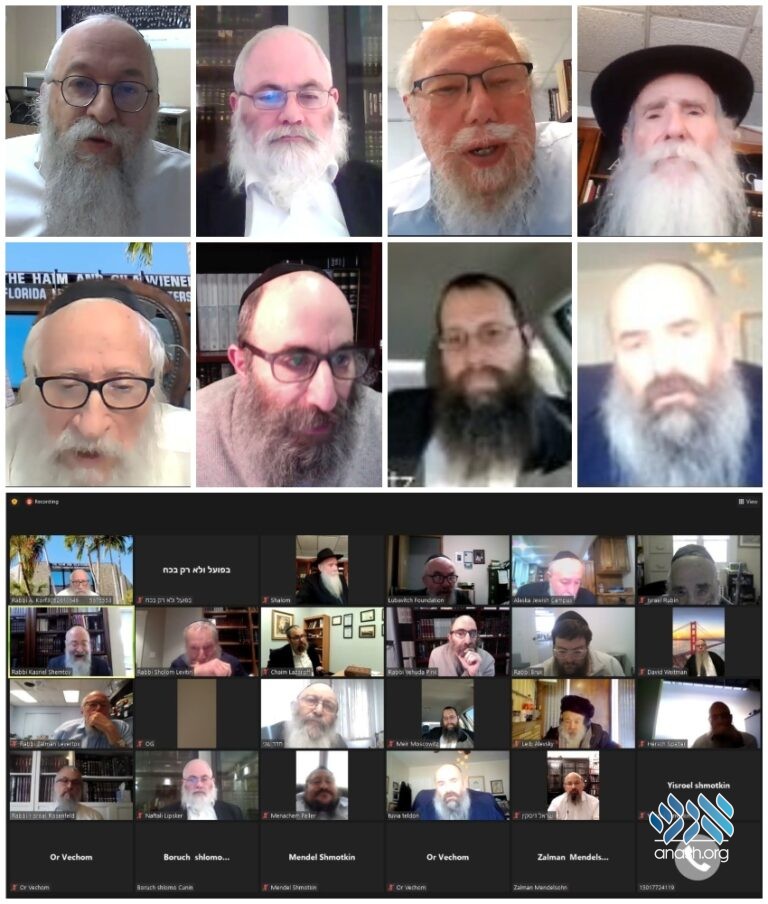 Over 50 head shluchim gathered yesterday via zoom to plan and share updates on the hachlata to establish 1,210 new mosdos in honor of the Rebbe’s 120th birthday. Over 800 are already pledged and in various stages of implementation.

As Yud Aleph Nissan is fast approaching, great excitement, coupled with a sense of urgency, is in the air. Shluchim worldwide have undertaken a vast hachlata of gifting the Rebbe with 1,210 new mosdos, in honor of the milestone 120th birthday.

Over 50 head shluchim gathered yesterday via zoom to follow up on the progress of this effort, initiated by Vaad Or Vechom Hahiskashrus. Updates were shared about forthcoming new mosdos worldwide, with over 800 already pledged and in various stages of implementation.

A large emphasis was placed on bringing down new shluchim. “As of late,” said Rabbi Zalman Levertov, head shliach of Arizona, “many yungeleit are ready to move on shlichus, and it’s easier today than ever before, with more funding and resources available.”

Rabbi Yehuda Pink of Chabad Lubavitch U.K., which has undertaken 120 new mosdos, shared that three new shluchim have already moved to England as part of this initiative, and an additional four are in the works. He also spoke about a “new-shluchim bureau” to help train and equip the fresh shluchim, which is being developed for the U.K.

Rabbi Shlomo Koves of Hungary announced that 12 new mosdos are in the works, including 3 new shluchim, a mikvah, and various other institutions. Rabbi Naftoli Lipsker of Chabad of Eretz Yisroel, which has also pledged 120 new mosdos, reported that there is much enthusiasm among the shluchim, many of whom are already in the process of establishing new kindergartens; opening Chabad houses in new neighborhoods; and planning new buildings. The goal of Chabad in Eretz HaKodesh, which now numbers 1,090 shluchim, kein yirbu, is 120 new shluchim which will total 1,210 shluchim by Yud Aleph Nissan, as a gift to the Rebbe.

Rabbi Mendel Shmotkin of Milwaukee shared that at the recent Kinus of Wisconsin shluchim, a conversation was held about how each shliach and shlucha can launch a new venture in their shlichus as a gift to the Rebbe. “The aim here is not only big buildings and new shluchim, but new projects as well, according to the Rebbe’s criteria in 5732 (1972), when he launched the 71 Mosdos Campaign on his 70th birthday”

Vaad Or Vechom Hahiskashrus, a division of Iggud Hashluchim, has been working tirelessly in coordinating this mobilization of shluchim from around the world to present the Rebbe with this collective gift. This meeting was a follow up to the head-shluchim gathering that took place before the Kinus, where the hachlata was initially taken.

Many states have already held local shluchim get-togethers, and more will be taking place in the near future, to buoy this undertaking. In the upcoming weeks, an online gathering of all shluchim will be held, to bring this initiative to full fruition. The organizers anticipate many more than 1,210 new mosdos, hopefully bringing a true nachas to the Rebbe.