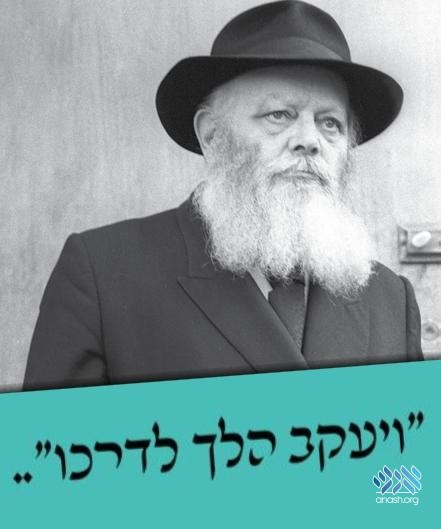 The famous chassidic sayings relates that after Tishrei comes the period of “V’Yaakov holach l’darko” -Yaakov goes on his way. What does that mean and what is its practical application to us?

“My father, the holy Rebbe [Rashab], when he was in our city of Lubavitch in the presence of our brethren, the temimim, after the grand seudah [on Simchas Torah], he began to say: Now is the time of ‫—ויעקב הלך לדרכו‬Yaakov goes on his way.

After the avodah of the [festive] month of Tishrei, now Yaakov [the name corresponding to the lower level of our neshamah, as expressed in the name Yaakov], meaning “heel” must go on his way, serving Hashem with Torah and mitzvos through everyday life throughout the year…”

The month of Tishrei, chock-full of joy and inspiration, is now behind us. It is time for us to begin our everyday avodah.

It is now that the incredible feelings of elevation will be put to good use in carrying out our mission in this world, creating a dira b’tachtonim.

The Frierdiker Rebbe compared this notion to a businessman laying out his recently purchased merchandise: “V’Yaakov halach l’darko; we must be sure that all the merchandise we acquired over the last fifty-odd days [since Rosh Chodesh Elul] should be unpacked and sold. From the pesukim on Rosh Hashanah and Aseres Yemei Teshuvah and the fasting on Yom Kippur; we all acquired this merchandise. Much like a businessman who purchases wares at the market and immediately sells them…”

“In Lubavitch on Motzei Simchas Torah, they used to announce ‘V’Yaakov halach l’darko…’”

A fact repeated by the Rebbe many, many times towards the end of the month of Tishrei.

On one occasion the Rebbe even specified that the announcement was specifically made loudly and for all to hear.

Likewise, the Rebbe often made a similar announcement at the conclusion of the month of Tishrei, either on his own, or by having someone else do it.

Over the years, the Rebbe expounded on the meaning of this quote and its application to the post-Yom Tov avodah for each of us. The Rebbe even explained each word of the quote and how they are specifically connected to this avodah:

‫—הלך‬The word means “going,” symbolizing that we must continually progress in our avodah and not remain stagnant.

‫—לדרכו‬Derech is a “road” that connects two separate places; it can even connect the furthest corners of a country with the palace of the king himself. In our instance, after the yomim tovim of Tishrei, we connect our everyday lives in the mundane world to Hashem Himself, making a true dira b’tachtonim.

The original source for connecting the possuk of ‫ ויעקב הלך לדרכו‬with the post-yomim tovim avodah is in the famous maamar by the Rebbe Maharash known as ‫ .תרל”ז‬- ‫ המשך וככה‬There, the Rebbe Maharash applies the possuk to the avodah following the teshuvah of Rosh Hashanah and Yom Kippur.

In Lubavitch, this possuk was applied to the avodah of after Simchas Torah.

The Rebbe explains that there are several stages in the avodah of ‫ויעקב הלך לדרכו‬.

One level is right after Yom Kippur. The Yomim Nora’im are a time when the unity of all the Jewish people shines. Rosh Hashanah is the day when ‫אתם‬ נצבים היום כולכם‬ – all the Jewish people stand together before Hashem. Yom Kippur is known as “‫”אחת בשנה‬ the one, singular day of the year, when all external elements melt away and the internal unity surfaces.

After Yom Kippur, we each start doing avodah on our own; building our own sukkah, acquiring our own lulav, and so on. That’s why we say ‫ויעקב הלך‬ ‫—לדרכו‬each on our own way.

But in a deeper sense, the unity of the Jewish people is still apparent through Sukkos and Simchas Torah. That’s why another level of this avodah of ‫ויעקב‬ ‫ הלך לדרכו‬ is attained immediately following Simchas Torah.

And in an even deeper sense, since the festive mood is still apparent until Shabbos Bereishis and the end of the month of Tishrei, we can apply yet another level of ‫ ויעקב הלך לדרכו‬to the beginning of the month of Cheshvan.

At times, the Rebbe kept the theme of ‫ויעקב הלך‬‫ לדרכו‬going even further into the month of Cheshvan.

Most notably, the Rebbe dedicated many of the sichos in early 5738 to this theme, expounding each week on another level and another take on this special avodah.

[These sichos were delivered from the Rebbe’s room on Motzei Shabbos, transmitted live by speakers to the main shul, after the Rebbe had a heart attack on Shmini Atzeres. Later, they were mugah by the Rebbe and printed (along with the maamarim), in Likutei Sichos vol. 20. This collection comprises a unique step-by-step build-up of the Rebbe’s take on the subject of ‫ויעקב הלך לדרכו‬.]

In addition to the spiritual energy that we experience during Tishrei, we also have the advantage of being together with many other Yidden as we celebrate the yomim tovim. Especially in the time of the Beis Hamikdash when Yidden were oleh regel to Yerushalayim, or in our time when so many Chassidim join together to be in the Rebbe’s presence for this festive month.

In addressing the theme of ‫ויעקב הלך לדרכו‬, the Rebbe often explained that when we each reach our home after being together with so many other Yidden, that’s when the real avodah begins.

The Rebbe explains: Each and every one of us experiences ‫ ויעקב הלך‬‫ לדרכו‬in our daily avodah. When we wake up in the morning we begin our day with davening and learning, then we go out into the world. This, in a sense is ‫ויעקב הלך לדרכו‬.

On a more general scale, it is the time of year after Simchas Torah, when we get back into our daily lives. And for those who spent Tishrei not in their homes but went elsewhere for the yomim tovim, their avodah of ‫ ויעקב הלך לדרכו‬ begins when they reach home after Simchas Torah.

But the point of this unity is for everyone to go back to their respective places and spread Torah and mitzvos to each and every corner of the world, and to spread Chassidus to the furthest corners of the “outside”—.‫יפוצו מעיינותיך חוצה‬

But where do we get the strength to carry out this avodah on a day-to-day basis, being engaged in the physical world as we are?

The Rebbe explains: The power for each of us to go out on our own
way—‫—לדרכו‬comes from our hiskashrus to the Rebbe.

So too, we must keep up a healthy connection with our “head”—the Rebbe, ensuring that we have the proper chayus to do our avodah. Our hiskashrus to the Rebbe is what gives us the power to fulfill the avodah of ‫ ויעקב הלך לדרכו‬ throughout each and every day of the year.