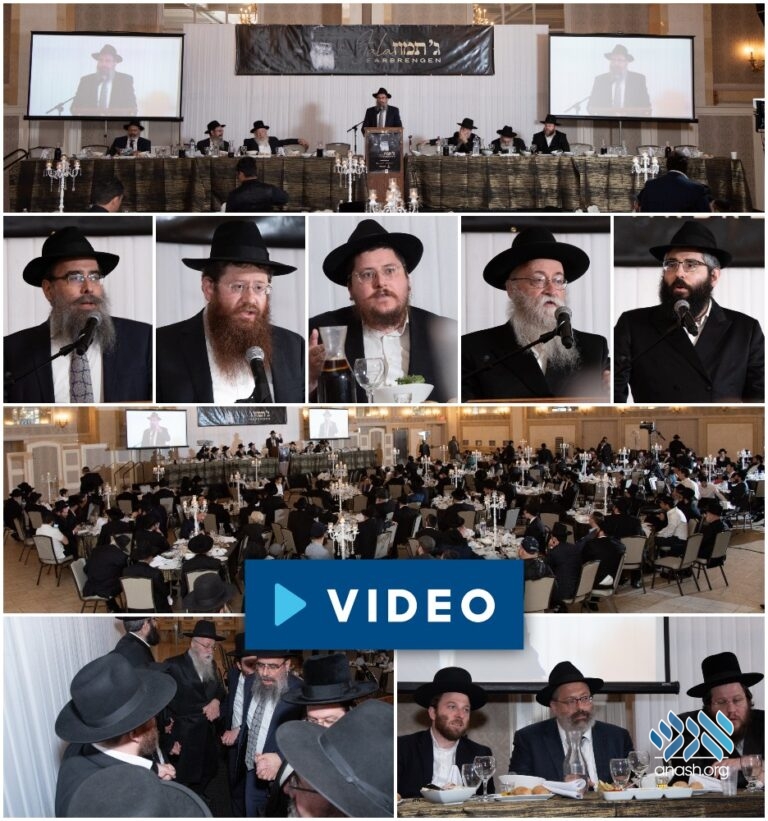 Hundreds of local Anash and friends from the greater Monsey area gathered on Sunday to honor the Rebbe and Chassidus, commemorating 28 years since Gimmel Tammuz.

On a warm summer evening this past Sunday, 4 Tammuz, hundreds of local Anash and friends gathered at the beautiful YSV Hall to honor the Rebbe and Chassidus, commemorating 28 years since Gimmel Tammuz. Months of planning and fundraising by a few dedicated yungerleit were coming to fruition.

MC Rabbi Berry Nash shared in his introduction how the Rebbe challenged Mr. Frank Lautenberg as UJA Chairman in a now famous interaction that “tomorrow we must look different than today.” This message was a theme throughout the evening and challenged those in attendance to leave the hall with a sense of responsibility once the evening was over.

Rav Boruch Dov Lesches, rov of the central “Tzemach Tzedek” shul highlighted the fact that the farbrengen was a great show of achdus, uniting the many shuls of Monsey and Pomona. He thanked the organizers for all their hard work and encouraged those in attendance to strengthen their commitments to the Rebbe’s teachings and vision.

Rabbi Moshe Gourary, mashpia of Bais Levi Yitzchok of Pomona and editor of the popular Chassidus Mevueres series, chazered the Maamar Zos Chukas 5748, renewing the tradition that a ma’amar be chazzered at chassidishe farbrengens. Rabbi Yossi Lowenbein of 110 Chassidim shul, brought to fore the timeless words of the Rebbe that when a person approaches life knowing that his action this moment is changing not only his world but the world as a whole, this is the key to bringing Moshiach!

Honoring the Rebbe amidst a show of unity continued as Rav Chaim Schabes, rov K’hal Knesses Yisroel and renowned posek spoke. He shared with the assembled how not only do we have a responsibility to always be the best version of ourselves, but it’s our responsibility to help others realize their potential as well. Without that element a person is considered as not keeping the words of Torah.

In between speakers, and while enjoying the beautifully catered meal, those in attendance were treated to the sweet sounds of niggunim sung by The Brooklyn Tenors and a beautiful “Sheyiboneh” rendition by Chazan Aryeh Leib Hurwitz.

The farbrengen thrived as special guest Rabbi Shalom Moshe Paltiel, long-time shliach to Port Washington skillfully drove home the message that it is us, and only us who can impact our own lives and fulfill the Rebbe’s desire to have a Dirah Betachtonim. Rabbi Paltiel – who enjoys a special relationship with Monsey and the rov Rav Lesches – was truly engaging and his style and personal stories kept listeners attentive and enthralled all evening.

The farbrengen was well attended not only by the local community and its rabbonim and mashpiyim, but by hundreds online. As midnight passed I spoke with a Shliach who had driven quite a distance to be there, he said, “This is what I needed to bring the inspiration from the last three days into my life. B’poel.

When Sholom Rabin, responsible for many of the farbrengen details, asked Rabbi Paltiel what he got from the farbrengen, he said, “I witnessed firsthand the ‘Achdus of Chassidim’ that the Rebbeim taught will lead to Moshiach. Such peulos are undoubtedly a huge nachas ruach to the Rebbe. Mechayil el choyil!”

The Farbrenegen was funded and organized by the generosity of Anash members throughout the Lubavitch Monsey/Pomona community. As askan Reb Levi Baruch, who played a crucial role in the evening, told me, “As a business owner I look for opportunities to do my Shlichus. Bringing together the whole Kehilla to honor our Rebbe was one opportunity that I welcomed with a resounding ‘yes’.”

In shuls across Monsey and Pomona the next day, you could hear people still “on a high” of the farbrengen that ended only hours earlier. When asking Reb Yehuda Zaltzman, one of the organizers, if more Farbrengens like this were in the plan; he said that based on the feedback he received, absolutely! He said, “I am privileged to help coordinate, the real work has only just begun.”