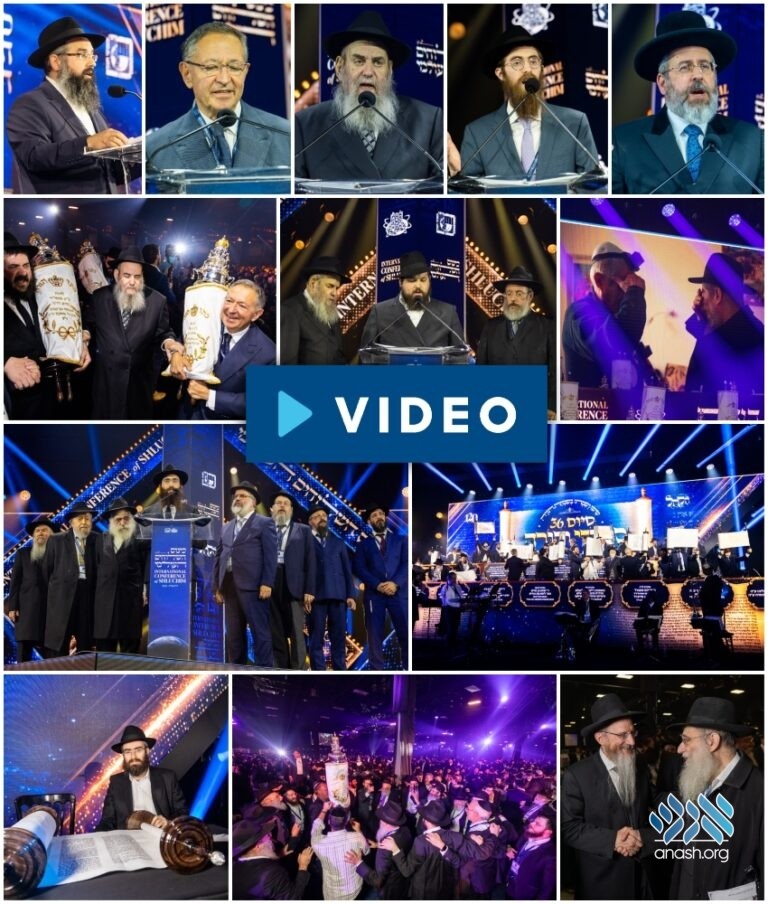 Over 6,500 Chabad Shluchim and their guests celebrate at the annual Kinus Hashluchim Gala Banquet, celebrating the resurgence of world Jewish life headlined by visionary donor and builder of Jewish communities, George Rohr.

The lights dimmed on the 6,500 rabbis and guests at the International Kinus Hashluchim, and the haunting cry of a violin filled the silence of the 150,000-square-foot New Jersey Convention Center. Then, 11-year-old Yitzchak Aizik Levitansky began singing and old Chassidic song: Nye Bayus Ya Nekogo—I fear no one, ee nye vyeru nikamu—and believe in no one, tolka B-ga adnavo—except G‑d alone.

Levitansky is the son of Rabbi Yechiel Shlomo and Rochi Levitansky, directors of Chabad-Lubavitch of Sumy, Ukraine, a city on the northeastern border of that war-torn country and a place hard hit in the fighting of this past year. The song of defiance and belief in the Almighty G‑d, sung by Chassidim through generations of unthinkable hardships, set the tone for the evening’s gathering of the vanguard of the Jewish world, the emissaries of the Rebbe, on all corners of the globe.

This year, a Year of Hakhel, marked the 120th since the Rebbe’s 1902 birth in Nikolayev (Mykolayiv), Ukraine, and tehillim (psalms) were read by Rabbi Sholom Gotlieb, chief rabbi and director of Chabad of the south-central Ukrainian city since 1996. He was followed by Rabbi Mendel Hecht, director of Chabad of Auckland, New Zealand; a special psalm for the safety of the people of Israel was recited by Rabbi Dovid Lau, Ashkenazi chief rabbi of Israel.

Noting how the volcanic landscape in Iceland, his adopted homeland since 2018, resembled the craters on the moon, Rabbi Avraham Feldman spoke about how he and his fellow Chabad emissaries dig deep into the fertile ground of the Jewis soul finding passion, fire, and Jewish identity bubbling to the surface.

Representing the newest crop of Chabad emissaries, Rabbi Laivy Mochkin, who recently moved to Palo Alto, Calif., said, “Although I never merited to meet the Rebbe in person, I did encounter on a daily basis the Rebbe’s message and mission. And that inspired my wife and me to similarly dedicate our own lives to our fellow Jews.”

The evening’s host, Rabbi Moshe Kotlarsky, vice chairman of Merkos L’Inyonei Chinuch, the educational arm of the Chabad-Lubavitch movement, introduced the guest speaker, legendary philanthropist patron of Jewish life all over the world, Mr. George Rohr, as his “best friend for over 45 years,” who, following in the footsteps of his late parents, has spearheaded the growth of Chabad on six continents.

Rohr’s talk was followed by a presentation on the herculean efforts of the Chabad emissaries in Ukraine during the course of the war, including an uplifting address by Rabbi Yechiel Levitansky of Sumy, Ukraine, who spoke with amazement of how 40 Jews braved the tension of war to celebrate Sukkot with his family in the sukkah.

A dramatic montage of historic and contemporary videos told the story of Rabbi Nochum Tamarin, rabbi of the small towns in western and central Ukraine, who went to great lengths to locate an elderly couple trapped in the war zone. His drive to care for them was inspired by the Rebbe’s care for his own family when they were trapped behind the Iron Curtain and his urging them to remain even after they were miraculously presented with an opportunity to leave.

Then, as Kotlarsky ran through his annual role call of Shluchim in all 50 states and 109 countries, he announced that a couple had been dispatched to Zambia, one of more than 120 new locations to welcome Chabad emissaries this year.

The evening concluded with the hoisting up of 36 new Torah scrolls—each of which will be sent to another Chabad center around the globe—before the scrolls were joyously carried around the cavernous hall during the jubilant dancing that capped the evening.