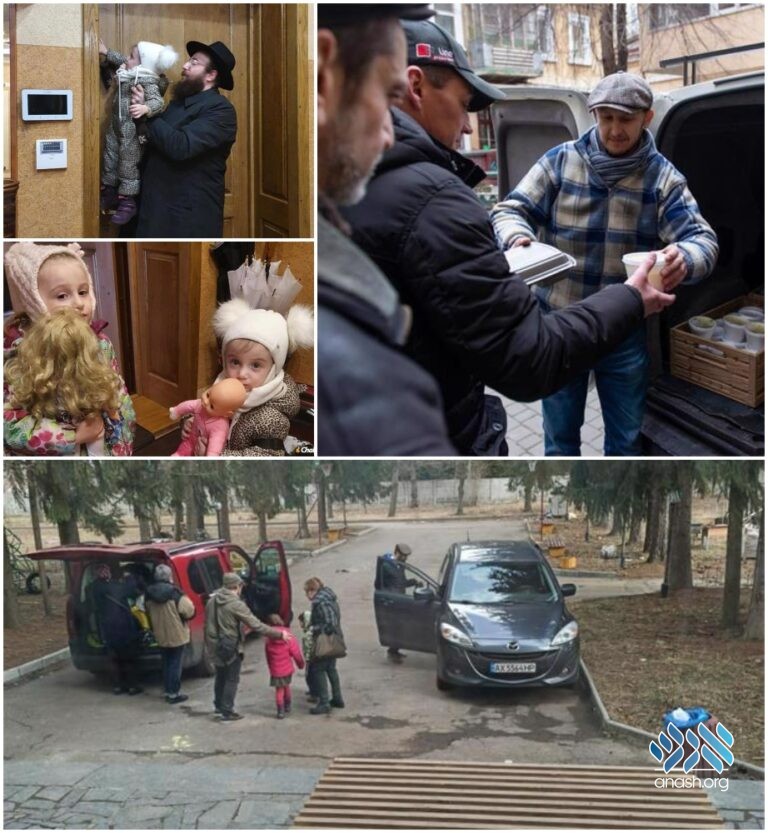 Up to moment they leave the war-torn country, and even after arriving in safer locations, shluchim from across Ukraine are helping their community members with food and shelter, and with assistance in evacuating and resettling.

They outlasted Stalin’s terror and famine in the 1930s and the Nazi Holocaust of the Jews in the 1940s. And they remained even after the waves of mass immigration of the 1990s. But today, tens of thousands of Ukraine’s weary Jews are leaving their homes, forced by a war not of their making to flee towards neighboring Poland, Moldova, and Romania, where they are seeking refuge in Europe or boarding chartered flights to Israel. Others have fled their hometowns and are taking refuge in cities in western Ukraine. And some have chosen to remain in the cities under attack.

The humanitarian effort to help the Jews of Ukraine wherever they may be did not begin when Russian tanks crossed the border. Ever since word of impending war began months ago, the Chabad-Lubavitch-affiliated Federation of the Jewish Communities of the CIS (FJC)—which serves all Jewish communities in the entire former Soviet Union—has been at the epicenter of an ever-growing humanitarian effort that crosses ethnic divisions, socio-economic strata and international borders.

And since the war began last week, Chabad-Lubavitch has been virtually the only conduit for Jews in Ukraine to receive material assistance and support of any kind.

Chabad.org’s Ukraine Relief Fund goes directly to the life-saving efforts of the FJC and Chabad emissaries in Ukraine, who have also marshaled the support of local and international donors. Funds donated through this page translates nearly instantly into much-needed cash on the ground.

“Literally every dollar that is donated right now is money sorely needed for work taking place as we speak,” says a source close to Chabad of Odessa’s relief work. “We are talking about food, clean water and medicine, we are talking about helping people leave. It’s saving lives.”

Largely situated within the historic Pale of Jewish Settlement, the area in which the Czars forced the Jews of the Russian Empire to reside, Ukraine is home to an estimated 350,000 Jews spread throughout the country.. Chabad has a permanent presence in 35 Ukrainian cities and towns, communities that are served by 200 Chabad emissary families.More often than not, they are the entire Jewish infrastructure of their home community, and Chabad rabbis and their wives run the local synagogue, as well as the Jewish school, youth groups, soup kitchens and other social services organization.

As the realities of war set in, most rabbis and their families chose to hunker down and remain in their adopted hometowns. A week into what has turned into an unthinkably brutal war to bombard Ukraine into submission, many of these emissaries have been forced to leave their cities, and chosen to instead shepherd their community members to safety, leading armored convoys and renting rail cars to help as many people escape as the Russian war on Ukraine intensifies and avenues to safety disappear.

In Russian-controlled Kherson, only 100 miles west of the Crimean Peninsula, Rabbi Yosef Yitzchak Wolff and his fellow Chabad emissaries spent days stockpiling essentials and distributing them to the city’s 1,500 Jewish families, until it became unsafe to leave the shelters. “We have been buying many tons of rice, flour, sugar, eggs, shvartze kasha (“buckwheat”) and bread, and distributing them to local families.” Wolff says his only concern is for his community. “Please G‑d, we’re doing everything we can to make sure they stay safe and unharmed.”

In Odessa, his brother Rabbi Avraham Wolff of Chabad-Lubavitch of Odessa also worked tirelessly to arrange safe passage for the children’s house of the Mishpacha Orphanage, one of three run by Chabad in Ukraine, all of which have been evacuated.

In the border city of Lvov (Lviv), as sirens blared, and residents feared to leave home, volunteers went from house to house, dropping off care packages with basic foodstuffs.

At the same time, as refugees stream through the city, the volunteers provide them with hot kosher meals and help them find places to sleep.

In Zaporozhye, where the area has seen heavy fighting and passage from the city is now impossible, Chabad has been distributing food to hundreds. “We asked them to come in small groups, to prevent anyone from getting hurt,” said a source on the ground.

In addition to food and shelter, people need spiritual and emotional support. Whenever possible, synagogues have remained open—in many instances becoming bomb shelters—and psychological treatment is being provided via secure web conferencing for those in need.

“People turn to me and ask if they can leave,” said Wolff of Odessa. “If they have the means, I tell them to go, why should they remain in danger. But for those who cannot leave, for whatever reason, we are staying put, providing them with spiritual and material aid.”

On Wednesday morning, with tears in his eyes, Rabbi Shlomo Wilhelm, rabbi of the Jewish Community of Zhitomir stood aboard a bus packed with mostly women and children. “This is the tenth bus we are sending,” he said above the din, his voice cracking with emotion. “They are leaving this community, leaving their homes. Why must we see small children crying, and mothers weeping? We’ve had enough!”

“We thought this only happened in the stories we were told as children,” said Wilhelm. “Now we are living it, watching people decide what to take with them and what to leave behind.

“The phone keeps ringing. Jews and non-Jews are calling, begging us to take them out. The bombs continue to fall non-stop. People’s homes are being destroyed. This is a simple city, what do they want from us? We must not give up!”

The effort is costing hundreds of thousands of dollars and is only expected to balloon in the coming weeks and months. Concerned people around the world have been streaming to Chabad.org’s Ukraine Relief Fund page to help their brothers and sisters in the besieged nation.

Upon arriving in Romania, Poland, and other neighboring countries, groups of refugees, including the Chabad-run orphanages, are welcomed by the local Chabad emissaries and aid workers.

As in Ukraine, they are given kosher meals, a place to sleep, and the wheels are set in motion to arrange for passage to Israel or other countries.

As soon as community members heard about their soon-to-arrive guests, donations of toothpaste, clothing, toys, and hygiene supplies rolled in, to the point that the organizers turned to social media to stem the tide, instead requesting orange juice, kosher cereal, and candy.

Other refugees have already boarded flights, and Chabad centers have scrambled to prepare to meet their needs. In Ayia Napa, Cyprus, Chabad has been preparing to host hundreds of refugees for an unspecified length of time.

Many Ukrainian Chabad emissaries and their families are citizens of Israel or other Western countries and need little more than a plane ticket once they cross the border. But for their community members, most of whom have never lived outside of Ukraine, the path to resettlement will be arduous.

Devorah Levenharts, who co-directs the community in Eastern Kiev with her husband, Rabbi Mordechai Levenharts, just spent more than 14 hours in an armored convoy of 140 Jewish people leaving the city.

The Levenhartses have family anxiously awaiting them in Israel, with whom they have been in constant contact via WhatsApp. For many others in the group they led, however, the future in Israel is a lot more uncertain.

“Some have nothing more than a Ukrainian birth certificate. We will help them immigrate, learn the language, and find work,” says Devorah Levenharts. “They are our family, and we will continue to support them whatever comes our way.”