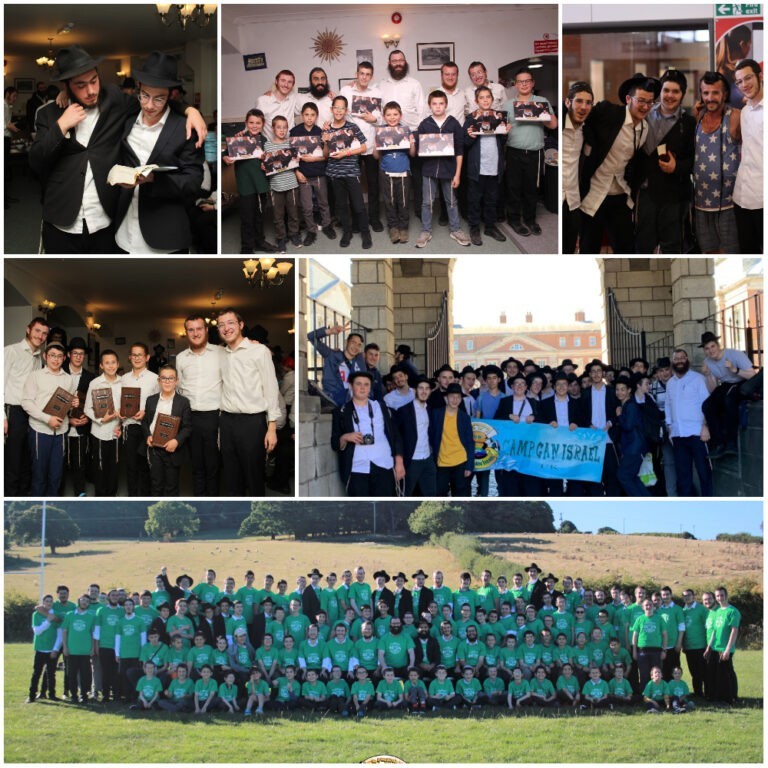 Camp Gan Israel for boys in the UK just finished the most successful summer experience with an unprecedented number of campers coming from around the world.

Camp Gan Israel in the UK was held at a stunning boarding school in the scenic Robin Hood’s Bay in North Yorkshire right on the North Sea in England. Directed by Rabbi Shmuli Brown and Menahel Ruchni Rabbi Folly Dubov, over 130 boys and staff enjoyed a fun-packed summer of learning and activities in a Chassidisher fun and lively atmosphere. Many came to the UK from various countries in Europe, Israel, and America, as they knew CGI UK offers the best possible summer experience one can dream of.

The dedicated, energetic, and devoted Head Counsellors Mendel Gurary and Zalmy Hirsch and the Masmidim Division Head Counsellors Eli Sputz and Shua Slavin together with the Learning Director Mendel Kramer and their remarkable talented, and devoted counselors did an outstanding job. They literally transformed the lives of many campers. Every counselor knows CGI UK is a Shlichus and they maintain the connection with the campers for many years.

On the second day of camp, the entire Masmidim division had a fascinating surprise – a flight to Dublin, Ireland! They started off by davening Shacharis in public in the main central park and went around doing Mivtzoim, putting on Tefillin on any Jewish person they met. They had a very humorous tour of Dublin by CGI UK director Rabbi Shmuli Brown and went to the famous Dublin Castle. The campers also completed challenges in the city.

The third day of camp was very special. After the children came back from a great ice skating trip, CGI UK arranged a beautiful Bar Mitzvah for one of the campers who r’l is orphaned. All campers dressed in their finest Shabbos clothes, the food was sumptuous, the speeches were uplifting and the dancing till the wee hours of the morning was electric!

On one of the trips, the camp went to Clifford’s Tower in York where they massacred many Jews there in 1190, they said Shema Yisroel, sang Ani Maamin, and heard an uplifting speech by kitchen staff member Moshe Golomb. The children had so much fun with the amazing trips from water sports, ice skating, swimming, boat ride, hikes, trampoline center, bowling, midnight runaways, farbrengens, sports, activities, color war, the banquet and so much more.

The amount of Mishnayus and Tanya learned Baal Peh, Maamorim, and Hachlotas taken was outstanding. The entire camp got up very early and sat for more than 2 hours reciting Tehillim on Shabbos Mevorchim Elul! The children bid on hundreds of lines of Tanya to learn just to dedicate an Aliya to their counselor or staff member!

The masmidim division had a special mivtza with 3 boys winning fantastic prizes of going to spend Tishrei by the Rebbe, fully paid for by the devoted counselors.

So many success stories happened in camp, one of which, a camper who doesn’t go to a Chabad school called up his parents and told them he doesn’t want to go back to his regular public Jewish school but rather he wants to enroll in the Chabad one instead.

The Chayos in davening and bentching, the entire camp singing in unison with hands around each other’s shoulders by the Shabbos meals, and all the beautiful stories, were amazing.

The children were fascinated by the general learning classes given by Rabbi Folly Dubov, who instilled Chassidishkeit in the campers throughout the duration of the camp in his unique way. Great prizes and awards were given at the banquet and a dollar of the Rebbe was won by a camper who entered a raffle by completing a special Mivtza in camp.

At the end of camp, each camper wrote a Pan to the Rebbe about their fabulous time over the summer and each took a hachlota upon themself.

Massive credit goes to the Head Cook Rabbi Yechiel Wilhelm, his wife Sara, and the entire kitchen staff for preparing such gourmet food and going way and above beyond their job, caring for each camper. Lots of thanks and gratitude to Tzivia Brown and the GM’s Mendy Uhrmacher, Tzviki Levine, and Shaully Levy for being a massive help in camp and for a summer that won’t be forgotten for a very long time.

The day after camp ended the positive feedback poured in from the parents, saying they have never seen their children change so much for the better over a summer period!

Even through the words ‘Goodbye Gan Yisroel’ where every camper was singing with arms around each other with tears rolling down their cheeks, CGI UK never says ‘goodbye’ as they have throughout the entire year, many Mivzahs keeping the children engaged and inspired till the next summer!