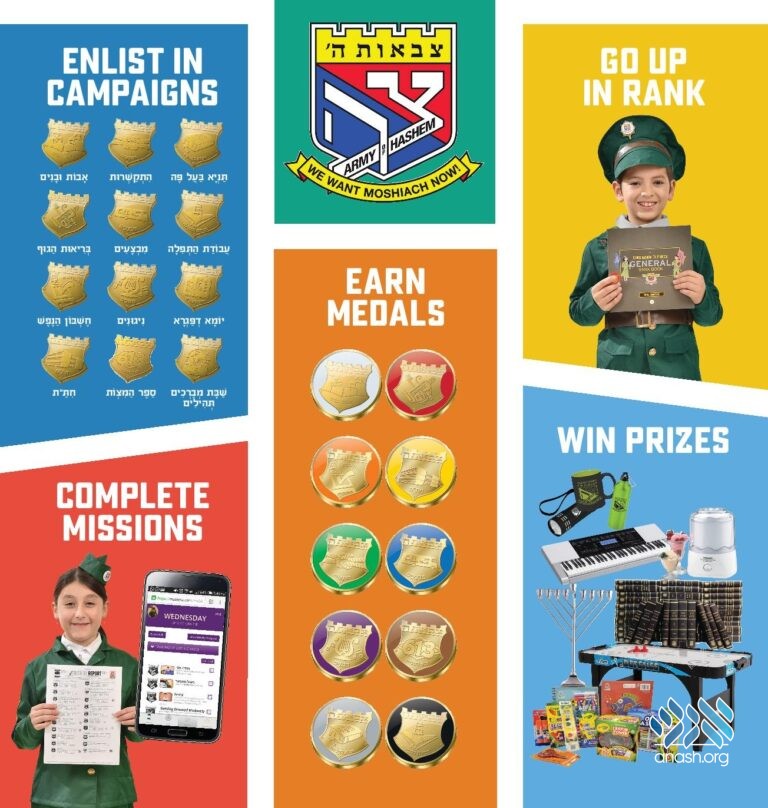 Do you know a child that does not go to a Chabad school but would still love to join Tzivos Hashem? Well, they can! Hashem’s army needs every Jewish child to enlist so we can bring Moshiach now.

Do you know a child that does not go to a Chabad school but would still love to join Tzivos Hashem? Well, they can! Hashem’s army needs every Jewish child to enlist so we can defeat the Yetzer Hara and bring Moshiach now and the Anash Kinder base is here to make that happen!

Most people have heard of Tzivos Hashem, but few actually know what it means to join. As the army of Hashem completes its 40th year, now more than ever is the perfect opportunity to enlist.

“First of all, this is not a children’s club,” says Rabbi Shimmy Weinbaum, director of Chayolei Tzivos Hashem. “In the words of our general, the Rebbe: ‘soldiers must realize that this is not a game. We belong to an army, established by Hashem, that depends on us for victory,’

The Rebbe understood our generation better than anyone. “The root challenge of today’s youth,” the Rebbe writes in a letter, “is the lack of kabolas ol.” The solution? A system of discipline that kids readily take upon themselves. It’s Tzivos Hashem: the most powerful force in the world.

Every Jewish child is a soldier from birth, and in eight years of school they are trained by their Commanders (parents, teachers and counselors) in bases around the world. After Bar or Bas Mitzvah, army service doesn’t end- it only gets more serious.

“What most people don’t realize,” says Weinbaum, “is that the whole purpose of creation lies in the hands of our youngest soldiers.”

With the Rebbe’s directives, Tzivos Hashem has designed a system that involves joining long-term military strategies called campaigns with daily, weekly, and monthly missions. As chayolim earn medals in each campaign, they advance in rank from Private all the way to Five-Star General. For extra incentive there are weekly, monthly and annual raffles. For inspiration, there are monthly rallies, and for all the resources needed to conquer the world, there are weekly and Yomei Dipagra Hachayol magazines.

And no child will be left behind!

Every child from every background has a role to play in Hashem’s army. With multiple tracks geared to different levels of Torah observance, Tzivos Hashem Anash Kinder is there for you! If your child attends a school that is not a Tzivos Hashem base- whether it is a frum school or not- you can join the Anash Kinder base. Anash Kinder will provide you with all the resources that other chayolim receive at school with Hachayol magazines, prizes, rank books, medals and more being shipped directly to your front door.

Every thought, word, and action of a soldier affects the entire world. This is a real army, with real impact- will your child enlist?

Sign up by Monday, Zayin Tishrei- September 13 to get $5 off.