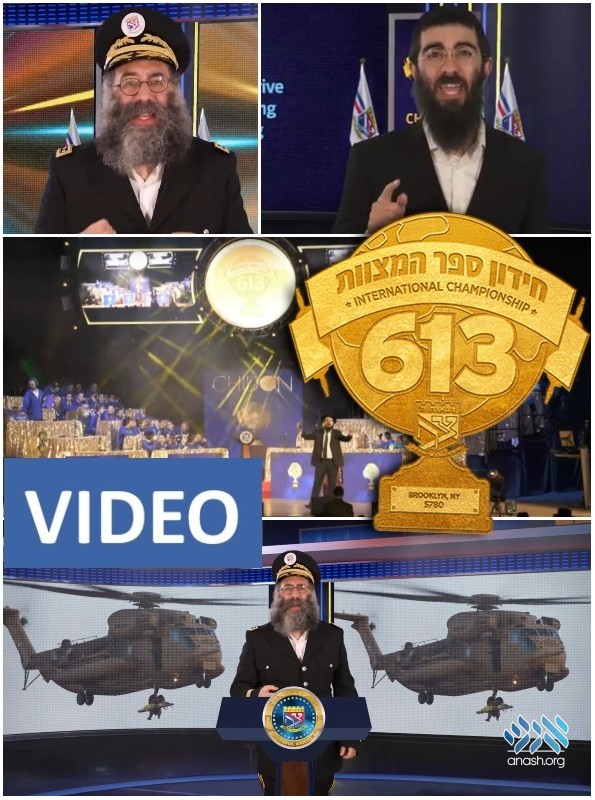 On Tuesday, schools across the world officially launched Chidon 5781, setting the stage for the thousands of children to learn the Rambam’s Sefer Hamitzvos and compete in a grand game show.

Although the calendar says we are holding two weeks before Rosh Hashana, in Tzivos Hashem they are already working on programs much later in the year.

On Tuesday, 19 Elul, schools across the world held the official Chidon 5781 launch, setting the stage for months of intense study of the Rambam’s Sefer Hamitzvos, culminating in a grand Shabbaton and game show.

“Before launching this year, we were faced with an unprecedented challenge,” Tzivos Hashem director Rabbi Shimmy Weinbaum told Anash.org. “How do we get the children to commit to another year of Chidon, if this past year the Shabbaton was unable to happen?”

“But the answer came from the children themselves. We at Tzivos Hashem know, that given the opportunity, the children will throw themselves right back in to studying, as if nothing had happened,” he said.

The launch took place at schools in America, Canada and abroad as well. Children were encouraged to come to school with their Chidon sweater, and to bring their certificates, plaques, medals and trophies that they had won in previous years.

A video was shown to the children, where Rabbi Weinbaum gave the chayolim a warm welcome to Chidon 5781.

“Everyone is asking what the plan is for this year’s Chidon is,” he said in the video. “In every generation, Yidden were faced with challenges, and heroes arose to fight for the Yidden. You, chayolim, are the heroes!”

Rabbi Weinbaum spoke to the children how despite all the challenges of the past year, the Chidon had taken place online, with a record number of viewers, and every child received their rewards.

He then presented the three tracks for the Chidon: Mitzvah Mavens, Trophy Contestants, Stage Representatives and the Kol Hatorah Kula Kids.

There is a four pronged plan for the Chidon this year, he told the children. Plan A is to have the biggest Chidon ever in the Beis Hamikdash, with Moshiach. Plan B, if chas v’shalom, Moshiach did not arrive, is to have a grand Chidon in Crown Heights with a Shabbaton. If that is not possible, Plan C is to set up regional Chidons, and if even that can’t happen, Plan D is to have a selection of incredible prizes for participants and winners.

The children then saw the Chidon Launch Song for 5781, sung by Eli Marcus, getting them into the real Chidon spirit and ready to take on a new year of studying all of the 613 Mitzvos.

Chayolim who register by Wednesday, Chof Elul (Sept 9) will receive their study guides by daled Tishrei (September 22) on time for their first day of the limmud.

24 Hour Book sale. If you register by Wednesday, 20 Elul (September 9) you will be able to buy the chidon book for $40 including free shipping to schools within the USA.

Starting with just 45
Chayolim learned in overdrive
One by one we joined along
Now we’re 5,000 strong

Listen closely, here’s the score
We won’t back down, we’ll win this war
We’re in too far and won’t retreat
Till golus we have beat

Satan sir! Make no mistake
My knowledge you will never take
No matter what plan you devise
The Torah is my prize

Chidon this year
The goal is very clear
Every mitzvah, every child
No matter how or where
Chidon will grow against all odds
No chayal left behind
He can’t break us, he can’t win
More passion you can’t find
Bigger, better, greater yet
His tactics just won’t fly
That Satan is no match for us
He may as well not try

Chidon will be
In the mikdash hashlishi
Look around you, see the signs
We know now is the time
It’s up to us to make it real
So let the learning start
Grab our books and learn with pride
We each will do our part
Chidon pay alef will be grand
As we’re the ones to bring
The final revelation of
Moshiach our king!