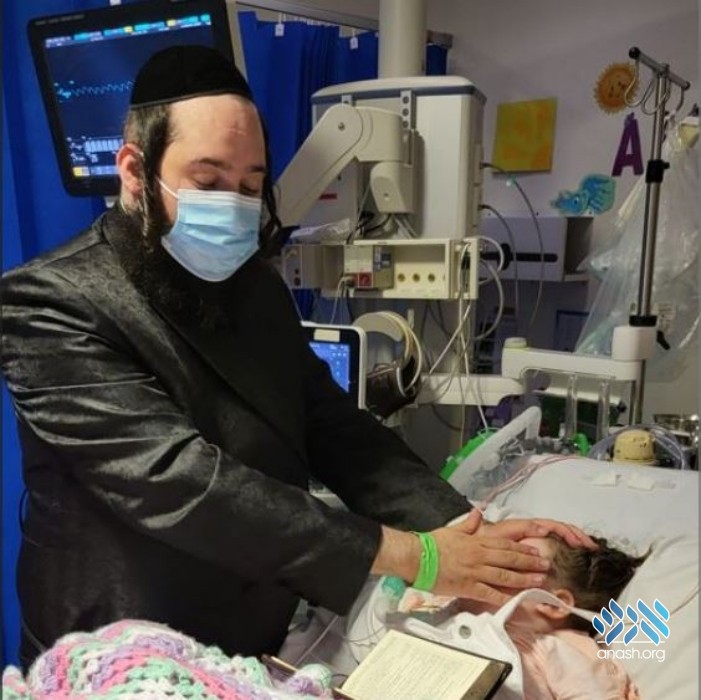 Alta's father bentching her on Erev Yom Kippur this year

Alta’s father bentching her on Erev Yom Kippur this year

Alta Fixsler, the 2-year-old, brain-damaged child at the center of a legal battle between her parents and the U.K. National Health Service, passed away Monday night after medical personnel removed her life support machines. US based activists called it “a death penalty couched in fancy legalese.”

Alta Fixsler, the two-year-old, brain-damaged child at the center of a legal battle between her parents and the U.K. National Health Service, passed away Monday night, approximately 90 minutes after medical personnel removed her the machines that had kept her alive since her birth.

A minyan was gathered around Alta in her hospice room, singing songs of hisorerus, until around 6:25 p.m. local time (1:25 ET), when the doctors and nurses walked in, and Avraham and Chaya Fixsler kissed their daughter, as the hospital personnel removed her from life support.

Alta Fixsler suffered a severe brain injury at birth, and was unable to breathe or eat on her own. The Manchester University NHS Foundation Trust, the hospital system responsible for Alta’s care under the U.K. National Health Service, said that there was no potential for her condition ever to improve, there was no medical benefit to continuing her life support, that she suffered pain and it would be humane to remove her from life support.

But the Fixsler family, as Orthodox Jews, insisted that Alta be kept alive. The family undertook an extensive lobbying and outreach effort, with U.S. and Israeli governments interceding with the British government on Alta’s behalf, asking that the girl, whose mother is Israeli and father is Israeli-American, be allowed to leave to one of those countries for medical treatment. Jewish charitable organizations had arranged transport, and there would be no cost to the U.K. government.

But the British courts upheld the hospital’s determination that Alta’s life support be removed, and the political lobbying effort was unsuccessful. The family even lost a final battle to at least be allowed to bring their daughter home to die, when a court ruled earlier this month that the withdrawal of treatment must be done in a children’s hospice.

After she was removed from the machines, Alta breathed on her own for approximately 90 minutes, with her oxygen levels continually fluctuating. Shortly before 8 p.m., she breathed her last.

Moments after Alta’s passing, Rabbi Moshe Dovid Niederman of the UJO of Williamsburg, one of the askanim who lobbied on Alta’s behalf, told Hamodia, “Baruch Dayan Ha’emes. We mourn the loss of the life of precious Alta ben Avraham a”h, dear not only to her parents, but to the Jewish community, and all people around the world who value human life.

“It is especially devastating that the U.K. rejected the pleas from both the US. and Israel, two of the U.K.’s closest allies, that the U.K. allow Alta to be sent to one of those countries, which were willing to provided her care. Why was this chance for the child to live denied?

“Instead of following the Hippocratic oath to ‘do no harm or injustice’ to their patients, doctors today took an action that resulted in their patient’s death.

“This utter travesty against this helpless, pure, lovely child, will never be forgotten. A country that supposedly doesn’t have capital punishment, today enacted a death penalty couched in fancy legalese.”