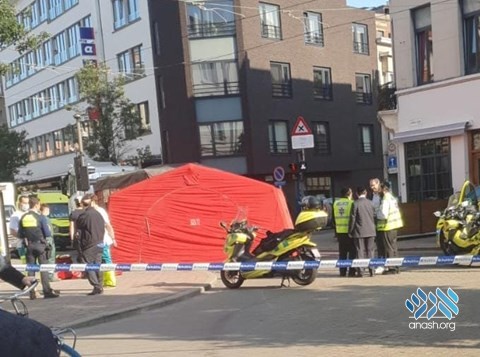 Two sisters, age 9 and one and a half, from the frum community in Antwerp, were killed Tuesday morning by a reversing truck in a tragic accident.

A terrible tragedy occurred in the Chareidi community in Antwerp, Belgium on Tuesday morning when two sisters crossing the street in the Jewish quarter were run over and killed by a truck.

The accident occurred when a truck turned onto a main street lined with shuls and Jewish stores and failed to notice the two sisters in the crosswalk, crossing the street after the light turned green.

The sisters were identified as Hindel Adler, a’h, age 9, and her sister Gittel, a’h, age 1.5, from a well-known family of six children belonging to the Gerrer community in the city. Their father, Reb Gavriel Adler, is one of the heads of the kehilla.

Hatzolah of Antwerp quickly arrived at the scene but sadly could do nothing but determine the girls’ deaths. Meanwhile, the police closed the streets near the scene of the accident.

The police have opened an investigation into the circumstances of the incident. The driver is in shock and is being treated at the hospital. He will be questioned when his condition improves.

Two brothers in yeshiva are on the way home for the levaya which will be held on Tuesday afternoon.