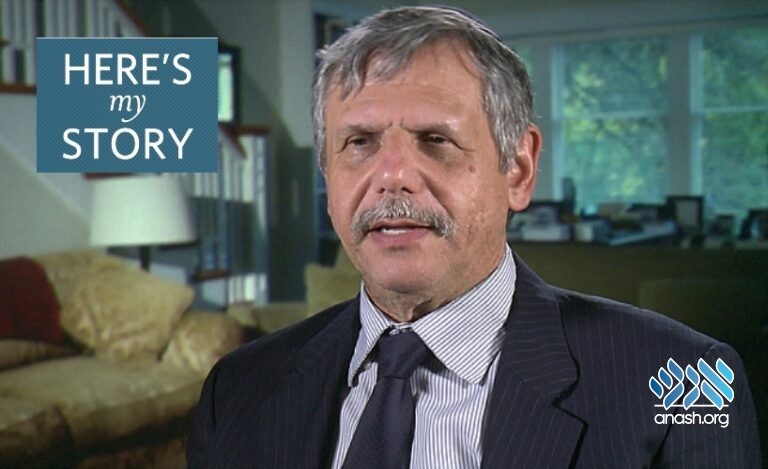 In 1991, while doing research for a dissertation, Dr. Benjamin Mollov visited 770 to interview Rabbi Yehuda Krinsky about his subject’s relationship with the Rebbe. As it turned out, Dr. Mollov, developed a relationship of his own.

Dr. Ben Mollov teaches political science at Bar Ilan University, where he heads the Project for the Study of Religion, Culture and Peace. He was interviewed in the My Encounter studio in February of 2015.

I was born and raised in Queens, New York, in a traditional and highly Zionistic Jewish family. Although I attended yeshivah in my youth, my experiences there were not at all positive and they turned me off to Orthodoxy — at least to the kind of Orthodoxy that I had come to know as a youngster, focused solely on rituals and absent of any deeper meaning.

One small bright light during high school was a farbrengen led by the Rebbe which I attended at Chabad headquarters. Also, I recall hearing some Chabad rabbis speaking about how the Torah elevates the human being in all areas of life. That stuck in the background of my consciousness, and it made a difference later in my life. But, back then, it was not enough to offset the negative impression that my yeshivah experience left upon me.

Subsequently, I attended Queens College, majoring in political science with a minor in Jewish studies, and when I studied Jewish philosophy, Judaism became meaningful to me for the first time. I went on to receive a Master’s Degree from Columbia University and then made aliyah to Israel, where I moved closer to Torah observance, remembering the lesson of the Chabad rabbis that the commandments of the Torah are meant to elevate the human being.

After serving in the IDF and exploring various careers, I decided to return to academia and pursue a Ph.D. degree in political science at Bar Ilan University. It was important to me that my studies have a Jewish aspect, and this led me to begin researching the life of Hans Morgenthau, who became the focus of my doctoral dissertation.

Hans Morgenthau — a German Jew and the author of the classic Politics Among Nations — was one of the most prominent political scientists of the 20th century, whose influence on international relations is considered on par with Sigmund Freud’s influence on psychology. The terms he coined — such as “national interest” and “balance of power” — are today part of the lexicon of American political foreign affairs. Indeed, Henry Kissinger, the US Secretary of State under President Richard Nixon, considered Morgenthau his mentor.

I was examining the impact which anti-Semitism and Morgenthau’s own Jewish moral and spiritual heritage had on his political thought, and in the course of my research, I learned that Morgenthau had had a relationship with the Lubavitcher Rebbe.

He told his daughter, Susanna, whom I interviewed, just how much the Rebbe had impressed him. Generally, Morgenthau was quite fascinated by the whole phenomenon of power in all its manifestations — especially the power of personality to attract others and to start a social movement — and he saw the Rebbe as exuding that kind of personal force.

Naturally, I wanted to speak to the Rebbe himself about all this, but because he was no longer granting private audiences, I made an appointment to interview his secretary, Rabbi Yehuda Krinsky. This was set for Sunday, August 11, 1991.

In that interview, Rabbi Krinsky told me that Morgenthau and the Rebbe corresponded and that they met on several occasions. During those meetings, they discussed Morgenthau’s views, with the Rebbe citing various passages from Politics Among Nations.

Morgenthau was extremely impressed that the Rebbe had read his book, understood it, and could even reference it. These meetings clearly had an impact on him as, after a lifetime of non-observance, he decided to put on tefillin. He confided in an acquaintance that he regretted not being more involved with Judaism earlier on in his life. Most telling of all, was his request to be interred in the Chabad cemetery.

Susanna had previously told me that toward the end of his life, her father began thinking about arrangements for his funeral. Some of his German-Jewish ancestors had been cremated, and he thought he should follow the family tradition. At that point, he sent Susanna to talk to Rabbi Krinsky about it — to say that he wanted to be cremated but also to have a Jewish funeral. Rabbi Krinsky informed her that a Jewish funeral involved a burial — cremation is forbidden by Jewish law — telling her, “Your father has to make up his mind which it is to be. He can’t have both.”

So he decided on a Jewish funeral, and when he passed away in 1980, he was buried in the Chabad section of the Montefiore Cemetery, not far from the Previous Rebbe.

All of this was fascinating to me and I thanked Rabbi Krinsky for the information. Then, as our meeting was coming to an end, he said, “As today is Sunday, the Rebbe is presently receiving the public. I would like to take you to him and introduce you.”

I hadn’t expected this at all, but was very happy about it, and I said to Rabbi Krinsky that I could use a blessing from the Rebbe because my wife and I had been married for seven years but still had no children.

When he introduced me to the Rebbe, Rabbi Krinsky made a point of mentioning this, and the Rebbe gave me two dollar bills — one for me and one for my wife (which we were meant to pass on to charity), and he blessed us and our “children to come.”

To be honest, I was overwhelmed by his presence. He exuded a kind of calm spirituality that I felt was truly transforming. I only had that sensation one other time in my life, when I visited the Temple Mount. I was certainly not a disciple of the Rebbe because I didn’t agree with his politics, so I was not expecting to be awed by him — but I was awed nonetheless.

And his blessings bore fruit:

I successfully completed my dissertation, called The Jewish Aspect of the Life and Work of Hans J. Morgenthau, which was then published as a book under the title Power and Transcendence. And fifteen months later, on November 28, 1992, our son Yaron Odeh-el was born.